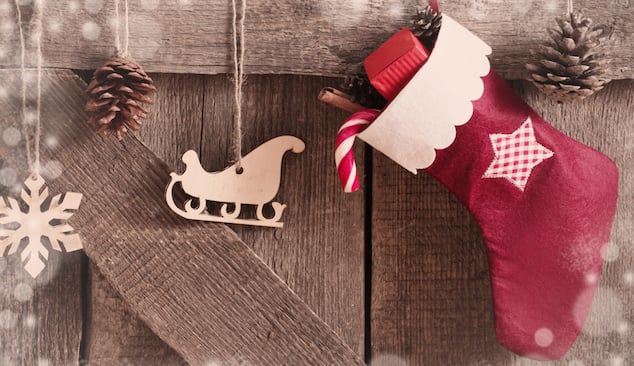 What will be in Phil Rhodes' stocking next year?

From universal raw to the end of log formats to the ideal lens grip, Phil Rhodes continues his fantasy Christmas wishlist for the camera people in your life.

In the first part of this feature, Phil Rhodes wished for a universal lens mount, a single-latch tripod, and a battery mount recorder. In this instalment his requirements get a little bit more esoteric.

I’m willing to be convinced on this one.

Even news cameras, as we saw with the Panasonic HC-X1 and the Sony Z150, are now starting to use comparatively large single sensors which require mathematics to derive a viewable colour image from the matrix of red, green and blue pixels. It's commonly claimed that there are fundamental differences between the sensors made and used by various manufacturers, such that the mathematics used needs to be individually tweaked for the best results, or even for good results. That's fine when it's all built into the camera, but when the de-Bayering process is part of post production, as it sometimes is, it creates a lot of complexity.

It also isn't clear that these per-camera tweaks are completely essential. The open source dcraw project started life in 1997 and remains under active development to this day, supporting the raw formats of hundreds of cameras. The existence of the DNG format suggests that Adobe agrees; much as with our earlier musings over lens mounts, there are few really supportable reasons to keep things proprietary other than an attempt at vendor lock-in. If there's no technical justification for sensor-specific approaches, all we're doing at the moment is keeping the market fragmented, and ultimately that's bad for everyone, manufacturers included.

It's probably impossible, or at least effectively impossible, to provide an objective assessment of that necessity which would satisfy everyone. Different people have different ideas of what makes a good picture, and there are compromises intrinsic to Bayer-pattern imaging which are introduced both at manufacture and in the software. There's a balance between good sensitivity, dynamic range, sharpness and achromatic noise on one hand, and good colour accuracy and chromatic noise on the other. The relative value of these factors is a matter of opinion (and that realisation does come implicit with the idea that the quality of the manufacturer's processing is also a matter of opinion.)

Something that isn't so much of a matter of opinion is the application of things like geometry correction, to remove lens distortion and chromatic aberration from images. This is something that can only be done after the Bayer-patterned images have been converted to a more conventional state, and it needs to be done with some considerable knowledge of the camera's behaviour, and this may be a large part of the reason why manufacturers prefer their own code. We wouldn't want to stick a spanner into these works, because they allow some cameras to correct lens behaviour to an extent which provides very good performance. This is cheating, and in a results-oriented industry it's just the sort of cheating we like to see.

Happily, the DNG format has a way to specify many of these post processing steps, and a way to add more options as required. As such, this is really just a call for universal adoption of DNG. It's easy enough to understand why it hasn't happened; it's just as easy to understand why it should.

As gifts go, this is an odd request because I'm about to spend a few hundred words describing in detail something I wish existed, but wouldn't actually suggest anyone try to create now.

Along with the standardisation of raw formats, wouldn't it be great if every camera output a compatible log format and colour space, too, so that we didn't have to carry a lookup table for every occasion?

What we're talking about here is the relationship between the amount of light that enters the lens and the number that ends up in the file, which is a complex topic even in the simplest of circumstances, given the way that this relationship is modified by almost every system that touches the image. There may be a slightly better justification for per-camera picture formats than there is for per-camera raw handling code. Sensors differ enough, in terms of the extremes of their red, green and blue colours and their noise performance that there's at least some reason to believe that camera-specific implementations are necessary.

Could a picture encoding standard be designed which could cover everyone's use case? Well, it already has been: it's called ACES, but nobody's seriously proposing that we start recording ACES, simply because the bucket is so big that no one camera will fill all of it (in fact, no visible light camera ever could) and recording it in the field would be both unnecessary and very expensive in terms of fast flash storage. Perhaps one day, when storage has advanced to the point that audio has long since achieved, where space and performance are almost trivial, we'll do that. Until that time, ACES is not directly the answer.

Any attempt to create a universal log encoding and colourspace at this point is likely to either be too limited to maximise the capability of current cameras (as Rec. 709 is) or too big to store easily. So, let's not fall into the trap of recognising an overabundance of standards, then adding to it by creating one more. Leave it alone. Just don't create any more.

In 2012, VizTools showed a handgrip at NAB which was designed to control DSLR lenses in like manner to a B4 lens on an ENG camcorder. Since then, other people have shown similar things – the estimable Alister Chapman showed a prototype on his YouTube channel in 2013, for instance.

Neither project seems to have gone any further, and there's probably never been a better time for it. Not only does the issue with the ergonomics of stills lenses endure, but there's at least one major new option for lightweight news and documentary on super35 sensors, the Zeiss LWZ.3, which lacks a grip. Zacuto's control grip, and the similar item supplied with an Ursa Mini, are good, but are necessarily engineering compromises. Given all the electronics, they can't be as close to the camera's horizontal centre of mass as one that's made to wrap around the cylindrical part of a lens. As such, the user's grip is too far out to the right-hand side, and the camera tends to fall over to the left.

Because of this, I think that making a lens grip out of a big box that straps on the side of the rods, or on the side of the camera via a rosette, is slightly missing the point. The electronics, if any, can go anywhere. The prime purpose of the grip itself is ergonomic, not electronic: to provide a surface that can be used to support and direct the front end of the camera. A record start/stop control is physically small. Servo zoom is bulkier and may imply servo motors. The main aim here, however, is to give us something to hang on to, and to put that thing as close to the balance point as possible to keep the rig from being top-heavy. It needs to be a shell – a curved shell, to sit around any of various lenses, and not much more.

We've already touched on the main problem with this idea. Most people would want some electronic interfacing, and there are a lot of approaches to doing this. The LANC control protocol, as used by the Ursa Mini's own grip, is a good approach that many cameras could and should implement. Some DSLRs just need a closing contact, or a USB device, to start recording. The good thing about modern electronics is that basic transport control, given the relevant technical information, completely possible on a single low-cost microcontroller.

None of this addresses the deeper, more difficult issues about lens control. Whether such a thing would or could need to control a zoom servo, or to command inbuilt characteristics of the lens, is another matter. Lenses which need a proprietary control protocol are a problem, though there are third-party solutions. This is potentially complex, but again, I'm not that bothered about the electronics. I'm principally interested in a more ergonomic grip. If the alternative is a clamp-on cylindrical handle that goes below the lens, all it has to be is a lump of metal.

It needs to be reasonably low-cost, since the top of the market are using high-value solutions which have grips anyway, but it seems like something that could and should exist.