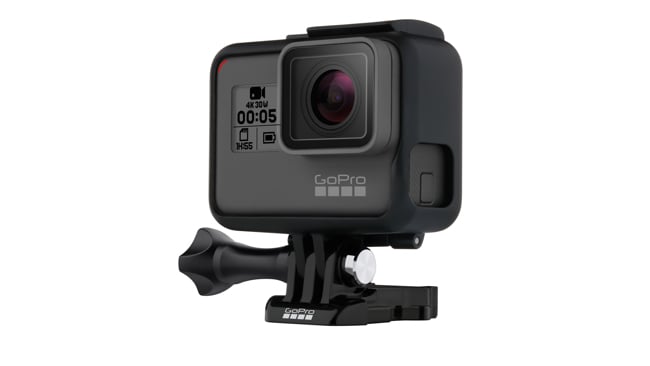 RedShark Review: We don’t need another Hero? Well, actually we do if it comes in the shape of the $399 GoPro HERO5 Black, which has the same sensor and slightly better picture quality than its predecessor but offers a radically improved user experience as soon as you start heading in to the advanced controls.

The GoPro HERO5 is a little bigger than its predecessor, but has a brilliant (literally) LCD touchscreen built-in, is waterproof with no further protection required for depths of up to 10m, and has a battery that lasts for 1h20min at 4K with all the options turned on. The technical specifications of the camera’s sensor and its recording capabilities in terms of frame recording speed and resolution haven’t changed, but some video and photo results look better than the HERO4’s nevertheless. One field of view has been added: linear, which gives you almost as much view as “wide” with a fisheye correction applied to it.

The HERO5 can be controlled by voice. In theory, that is. For example, “GoPro start recording” resulted in my HERO5 switching to photo burst mode instead — and I wasn’t even in a noisy place. I’ll keep using the surprisingly responsive 2-inch colour touch display, thanks. Even the advanced features, which you need to swipe to a different screen for, are easily accessed.

The HERO5 comes with QuikCapture, which lets you use the record button as a combined ON/OFF/ – START/STOP Recording switch. This is supposed to save battery life, because it starts recording immediately after power on, but you then turn the camera off when you stop recording. That sounds like a great idea, but I often shoot short clips with somewhat longer pauses in-between. So, as I don’t know quite what all the powering up and down does to the electronics, I turned it off.

Something to be really thankful about is the built-in electronic video stabilisation (EIS) feature. Anyone who expects this to work just as well as a $2K powered gimbal is somewhat misguided, but given that it’s also not as good as optical stabilisation, I still found it to work brilliantly when walking, smoothing out most jerks. It has limitations: no stabilising at 4K or higher than 60fps modes.

The features that really make a difference with the new camera, however, are the advanced ones. To begin with, the HERO5 has a clean HDMI-out mode that outputs in 4K. You can use an Atomos Shogun or Ninja Flame and shoot directly to ProRes 422 HQ in 4K using your tiny GoPro. I did find you should connect the camera to the Shogun or Ninja in a specific order: first turn the camera and Shogun on, then connect them. If you reverse that order, the screen of your Atomos device will start flickering randomly as soon as you hit the record button. Luckily, the resulting footage doesn’t seem to be affected by the flickering, but it’s a nuisance nevertheless.

The HERO 3, 3+ and 4 all had some kind of exposure control. You could set it to spot meter mode with the spot dead centre. With the HERO5 you drag your finger to the spot on the LCD screen that you want to expose for and select whether the camera should lock on or not. If you choose the latter, the exposure level remains set at the value that was correct when you selected the initial value until you cancel it. If you choose not to lock, the exposure will keep on prioritising the selected area, no matter what appears in there.

Best of all is that the LCD display shows you exactly what you’ll get, so you can really evaluate your shot. It’s not just exposure the LCD screen shows, either. Every change you make that has an effect on the end-result is shown on the LCD screen.

GoPro has been working on the audio quality of its HERO range for some time now, but the HERO5 is the first that really gets it right. You can record to a separate .wav file right from the camera mic (RAW Audio). This .wav file is recorded separately from the MP4 track. I tested it using the Low and High setting. With the Low setting, the recording was very silent, only recording my own voice, which was the closest to the HERO5. With this setting the camera applies minimal processing, which is best for post production audio editing. The High setting resulted in a much louder recording, due to the automatic gain setting and AAC encoding.

There’s also a Medium setting that works in tandem with the Manual Audio Control setting. This extra setting allows you to prefer wind noise suppression over stereo. In addition, you can connect an external microphone via an adapter that connects through the USB-C port. The adapter houses a DAC and has a mini-jack and a pass-through USB port.

In the photography department there’s also something to be thrilled about: the ability to shoot raw images. These photos are saved as .gpr files, which are based on the Adobe .dng format. For the time being you need an Adobe app to read them. I expect DxO Labs, Apple and Phase One to follow soon.

Photos (as well as videos, by the way) have metadata, including full GPS data. In video mode, I could recall that data only within the Quik app, using the widgets (or gauges as they’re called).

Finally, and with an optional GoPro Plus subscription only, the HERO5 Black can auto upload photos and videos directly to the cloud for easy viewing, editing and sharing on the go.

In my opinion the HERO5 Black is worth the upgrade, even if you already have a HERO4. First off, there’s the 4K HDMI output. In addition and to my surprise, some video resolutions (4K and 720p) are even a tad sharper on the HERO5.

But most important of all are the camera’s controls that make capturing footage with it so much more efficient if you don’t let the camera decide everything for you all the time. Certainly when you’re not using the HERO5 solely as an action camera, you’ll get superior results