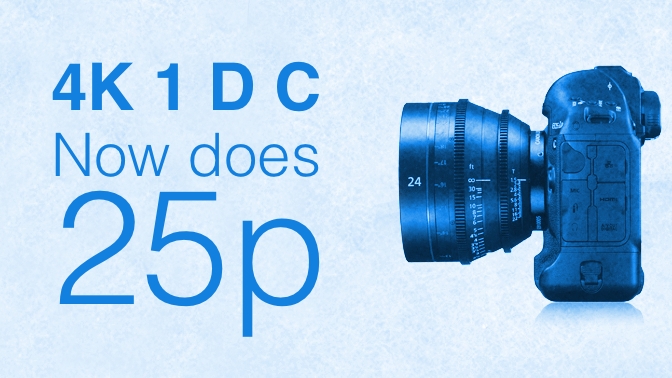 Good news for Europeans who've up to now been frustrated at the lack of 25p support in their video kit: Canon has taken the unusual step of releasing a firmware upgrade specifically to address this much-requested feature

Europe, the world's largest trading block, is hardly a cinema backwater, and yet it is common to find that video equipment does not support 25p. 50i is far more common but goes against the highly desirable trend towards all-progressive acquisition. Translating from either 24p or 30p is awkward and unsatisfactory in many ways and denies European video makers the purity of capturing their images in their country's native framerate.

The upgrade is for the Canon EOS-1D C, which is actually a top-end still camera but one which comes with the ability to capture extremely high quality video at 4K resolution. The camera is likely to be popular in all types of roles, even though very few users have 4K display capabilities yet, because 4K acquisition has other advantages. Not only does 4K give an almost perfect source for downsizing an image (which will make it look better virtually any other resolution) but it also means that the picture can be "zoomed" in to digitally without any apparent loss of resolution if the final viewing is at "standard" HD resolutions.

Another reason why the EOS-1D C is likely to be in demand is because it records to the almost universally supported MJPEG format, which will simplify the 4K workflow for everyone.

London, UK, 30 January 2013 – Canon today announces the development of a new feature upgrade for the ground-breaking EOS-1D C. The upgrade has been developed taking into account feedback from the European professional video community, and adds support for 25p recording at the camera’s maximum 4K resolution.
Designed for the motion picture, television and high-resolution production industries, the EOS-1D C is the world’s first DSLR to support 4K video capture. It offers a unique, highly portable package optimised for ultra-high quality recording, delivering exceptional low light performance and film-like dynamic range from a highly-compact body that can be used in a wide-range of shooting situations.

The EOS 1D-C captures 4K (4,096 x 2,160) video using 8-bit motion JPEG compression, with the ability to simultaneously output an uncompressed Full HD (1920x1080) YCbCr 4:2:2 signal to an external recorder via its HDMI terminal. Full HD video can also be recorded direct to CF cards at frame rates of up to 1080/60p, whilst Canon Log Gamma ensures video is rich in exposure latitude and dynamic range – offering outstanding freedom for video professionals during shooting, and for colourists in post-production.

The new feature upgrade will be available free of charge from April 2013.