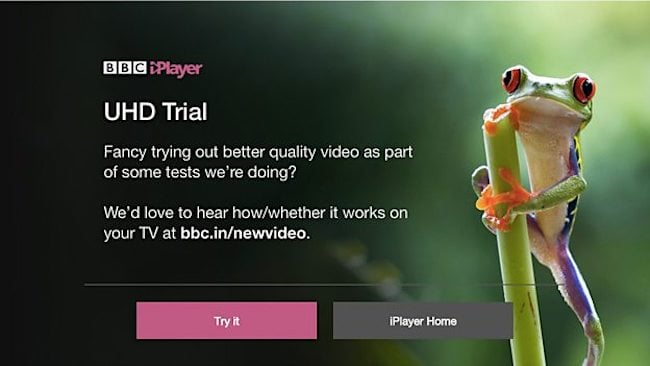 Great images available if you have the right set

It might only be four minutes of footage, but, 80 years after it first started broadcasting, the new clips of Sir David Attenborough’s Planet Earth II now available on the BBC iPlayer are the best quality pictures the BBC has ever made available to the public.

Somewhat out of the blue the BBC has announced that it’s begun a trial of 4K HDR video over iPlayer in a test featuring four minutes of footage from Planet Earth II - the first BBC series made in both 4K and HDR.

The demo is intended to show how the BBC could make UHD HDR material available to stream.

"We want to use this as a trigger to work with manufacturers to get their products updated so there's a pathway there for future on-demand BBC content,” explained Phil Layton, head of broadcast and connected systems at BBC Research & Development.

"One of the clips is a frog on a leaf with lots of rain, and the reason this is so interesting is that the redness of the frog is a really deep, Ferrari red that you would never get in broadcast television at the moment," Layton told BBC news online.

Naturally the BBC has chosen to deliver the HDR version in HLG (Hybrid Log Gamma), the HDR variant it developed with Japan’s NHK and one of two schemes, along with Dolby’s PQ, ratified by the ITU and the DVB for UHD phase 1 production (the ITU’s standardisation should make using either approach interchangeable although in practice PQ will probably be destined for more feature film and drama content with HLG for live work).

The difference is subtle but can be boiled down to PQ being perceptually better to look at, provided you have a top-notch reference monitor like the Sony BVM X300 or a panel certified with Dolby Vision. HLG is designed for HDR to be playable on all kinds of TV from the top-end 4K HDR modules coming to market in the new year through to HD and older 4K screens where pictures will still benefit from an HDR sheen.

This theory seems slightly at odds though with a note from the BBC that as of today only Panasonic's latest screens support HLG, but, as the Corporation also says: “Although recent models from other manufacturers can also be updated to add the facility, it is unclear whether the firms will do so."

We’ll probably know more after CES next month. Certainly there is plenty of momentum building behind HDR, with estimates being that in North America the penetration of true HDR TVs will rise to between 10% to 14% at the end of 2017. Meanwhile, in the UK both BT Sport and Sky are experimenting with HDR for live sports and will likely introduce it next year.