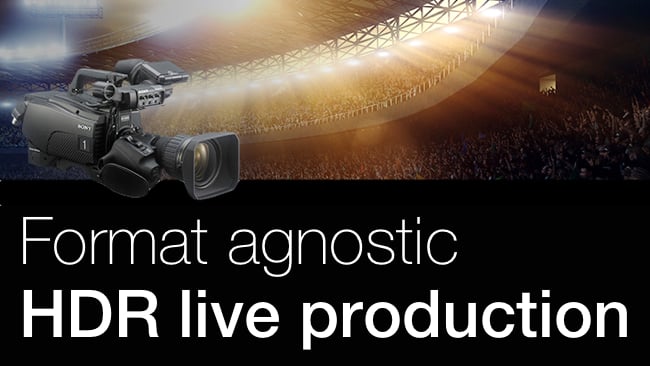 While there are emerging standards for HDR, there are none yet for HDR live production. Happily, it looks like Sony has a workable solution.

Quite often, transitioning between broadcast paradigms (4:3 to Widescreen, SD to HD, HD to 4K and of course SDR to HDR) can be almost as tricky as implementing the new technology itself. It certainly was in the case of Widescreen in the UK. Oddly, the move to Widescreen took place several years before the first HD broadcasts, but around the same time as digital terrestrial TV hit the airwaves.

With widescreen, there’s the ever-present challenge to keep your output compatible with 4:3 viewers. The UK’s approach was nothing if not pragmatic. Content producers were told to assume an aspect ratio of 14:9. This meant that 4:3 viewers either had small black borders at the top and bottom or their screens or - if they “zoomed in” they would only lose a small and insignificant piece of the picture on either sides.

16:9 viewers would see narrow black bands down the side of the picture or, again, if the zoomed in, they’d only loose the very top and bottom of the picture which would then fill the 16:9 screen.

The only drawback to this very practical solution was that viewers and content producers were sometimes far too confused to make full use of the compromise. Fortunately the arrival of HD sorted all of that out.

In some ways, what we have now is much more complicated in that you can have any combination of SD, HD, 4K SDR and HDR.

So if you’re planning a live production, one that’s likely to have feeds in different formats coming in, how do you cope?

Sony’s thought about this a lot, not least because the Japanese video company has been asked for real-world solutions by its customers. And it’s another great example of pragmatism. Essentially, what Sony does is convert all incoming feeds to 4K resolution with a BT2020 colour gamut, expressed as SLog 3.

In an ideal world, all feeds coming into the switcher would be in this format, but this is obviously unlikely for quite some time.

So, meanwhile, incoming HD feeds are upconverted to 4K and to BT2020. 4K signals remain at 4K and if they have High Dynamic Range, they’re converted to SLog 3 and BTW 2020.

All other formats can be derived in real time from this system-wide format.

With all of this in place, the Sony system is effectively agnostic.

Sony also has a solution for monitoring in both HDR and SDR. If you’re using a 4K camera, it connects as usual to the CCU and the Baseband Processing Unit. There are separate signal paths for HDR and SDR. You can output from the Baseband Processing Unit in HDR/SLog 3 in an HD SDR feed. With careful gain adjustment, it’s possible to move the black level so that its possible to monitor an HDR production on an SDR monitor.

While there are emerging standards for HDR, there are none for HDR live production. So it's good to see Sony coming up with a practical idea to meet a genuine customer demand for format-agnostic live production.