Miller ArrowX 3 tripod on test: it's all a question of balance 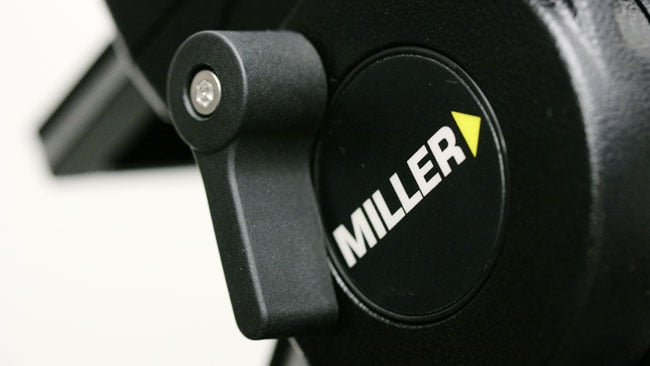 RedShark Review: Miller's ArrowX 3 (along with the rest of the ArrowX series) hearkens back to the days when a tripod could reasonably be expected to last decades, with a wide counterbalance range that should accommodate modern cameras large and small.

Things like batteries and lighting stands are among the best possible investments for freelance camera people as we'll always still need the basics. The most recent LED lights are still designed to be mounted on spigots so old they're still five-eighths of an inch, rather than 16mm, across.

Today, we're talking about tripods, specifically Miller's mighty ArrowX series, represented here by the ArrowX 3 head on its two-stage, 100mm-bowl carbon fibre tripod. Camera support equipment of this type will remain relevant regardless of whether we're all shooting 8K or Pixelvision, but there is a snag. Even ten years ago, camera crew could expect to encounter much more consistently-sized gear than they do now. 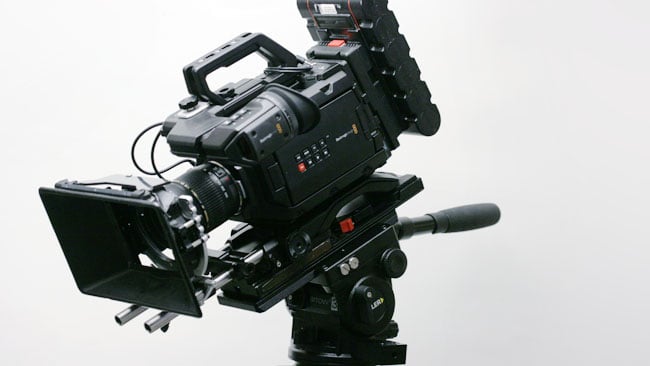 This Ursa Mini outfit is about two thirds of the way up the ArrowX 3's counterbalance range.

ENG people of the '80s, '90s and 2000s saw cameras of broadly comparable weight and balance for decades, meaning that one tripod investment would serve almost an entire career. Now, things are much more various. There are handycams out there, like Sony's PXW-X70, which weigh under a kilo body only and less than one and a half in a default shooting configuration. The following day, the same operator might reasonably encounter an ARRI Amira, which weighs something like four times as much with not so much as a battery installed and which is often outweighed itself by the big-chip zooms that are frequently mounted on the front.

Many fluid heads will deal with that sort of differentiation in terms of sheer strength; the problem is counterbalancing. When the camera is completely level, its centre of gravity is positioned directly above the tilt axis of the tripod. Assuming it's been properly balanced, the weight of the camera bears down directly through the tilt axis and there is ideally no tendency for the camera to fall forward or backward (that is, tilt up or down) under its own weight. If we tilt down, however, the camera's centre of gravity rotates around the tilt axis of the tripod, so that it's now in front of the pivot point, causing the camera to tend to fall farther forward. 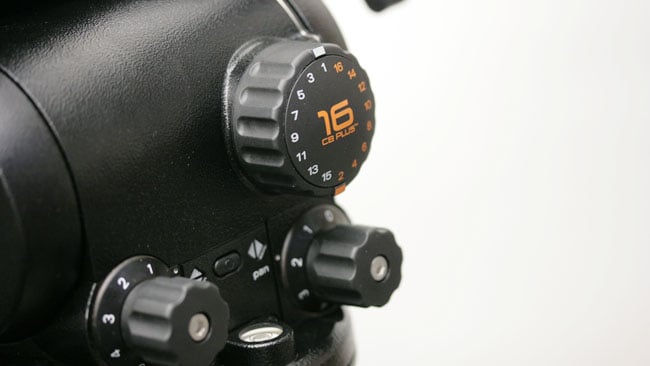 Miller's CB Plus system provides 16 levels of counterbalance force,
using this control and another on the front of the head.

Counterbalancing has been done for years with various arrangements of rotating cams and springs. Many designs have historically required interchangeable springs to deal with the varying weights of different cameras, although most even vaguely recent setups have a rotating dial to select from a few different levels of counterbalance force. The key innovation in Miller's ArrowX series is that there's a lot of different levels: eight main steps on the ArrowX 3 and an additional control which engages an extra half-step's worth of counterbalance force. As a result, the counterbalance force is variable across 16 levels to suit cameras between 1 and 19kg in various configurations. Miller calls the arrangement 'CB Plus' and it allows most outfits to be balanced within a very tiny margin of error.

Because of the variability of the counterbalancing situation with outfits having a wildly unusual centre of gravity, weight ranges on fluids heads are subject to a little interpretation, but CB Plus should allow the force to be trimmed very close to ideal. There are systems available which have genuinely continuous counterbalance adjustment, but they generally don't have nearly such a wide weight range, which is what will interest people who need to handle souped-up handycams the size of an anemic gnat one day and elephantine single-camera drama rigs, with every bell, whistle and cupholder, the next.

The sheer mechanical ingenuity of the fluid pan and tilt drag mechanisms is emphasised by Miller's entertaining trade-show cutaways. These reveal an internal space filled with complex configurations of axles and wheels, clamping plates, cams and drive shafts. This sort of engineering naturally removes any hope of a pocket-money price-point. At the entry level, the ArrowX 3 shown here, on single-stage alloy legs, sells for around £4500. The two-stage carbon fibre legs, as reviewed, are naturally pricier, while the midrange ArrowX 5 head packaged with a two-stage carbon fibre tripod goes for about £6000. For those with a crusading need for the top of the range, there's the mighty ArrowX 7 (just under £4400 for the head), which handles cameras between 6 and 25 kilos. 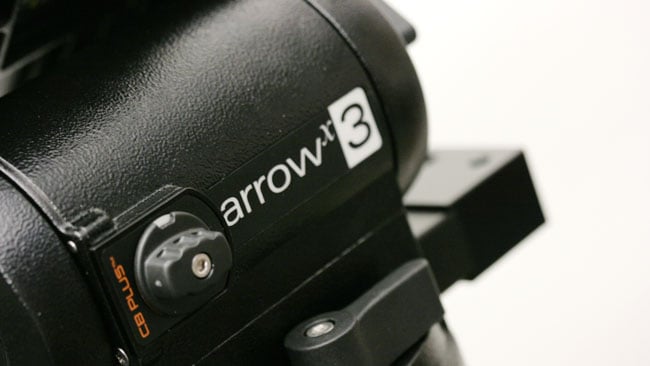 The control at left of this image selects half-steps of counterbalance force.

It's hard to find precise equivalents, but in the broad strokes, the ArrowX 3 stands up well in comparison to similarly-priced things. Sachtler's 1505 has lower maximum capacity and fewer counterbalance grades and the Vinten Vision 10AS enjoys infinitely-adjustable counterbalance, but a hefty 6.5Kg minimum load.

And this, of course, returns us to our opening gambit: a tripod is a long-term investment in a field where toys come and go with alarming speed and that's good. If a tripod is to fulfil its role adequately, though, it'll need to be flexible enough to handle all the possibilities of that long term. This appears to be the purpose of the CB Plus system. It works nicely enough and is well-enough made to suggest a return to that multi-decade lifespan we discussed earlier. Where cameras will be in that time hardly bears thinking about, but it's a fairly safe bet that they'll still need to be pointing in the right direction.