Atomos Shogun Inferno: Is this the best value recorder/monitor ever? 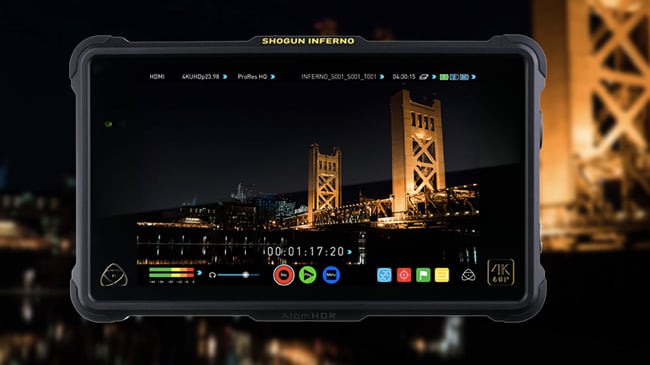 The Atomos Shogun Inferno: a lot of nits for under $2000

RedShark Review: For $1995 Atomos has packed a lot of features into its latest high bright monitor and produced an impressive package that has the potential to go even further as the HDR future unfolds.

Atomos recorders have risen very quickly to a position of prominence and ubiquity, principally via the fairly simple approach of offering widely-needed features a reasonable price. Since the company began using high-quality, seven-inch displays with full HD resolution, its products have also been capable of fulfilling the dual role of recorder and monitor.

There is, of course, now very significant competition in this market, but Atomos get several things right: there is no requirement for expensive rebadged flash storage, they're lightweight, there's a well-laid-out user interface and they take conventional Sony-style camera batteries, but also tolerate battery power around 12 volts via a battery plate adaptor. They also offer the ability to record less-demanding formats on to spinning disks, which is an unusual innovation.

The company's latest device, which debuted at NAB as a significant part of the splash of publicity over high dynamic range, represents the company pushing the boat out quite energetically, and not only because of the excitement over HDR. The hardware configuration of the Shogun Inferno enjoys considerable upgrades over previous models, to the point that the current firmware doesn't very fully explore the theoretical possibilities, and expansion beckons.

Still, it's not fair to base a review on what might happen in the future, so we'll first consider the high power display, which is very much the star of the show with the Shogun Inferno. While HDR talks specifically about dynamic range, practical implementations of it also require a lot of sheer power to create the punchy peak whites which make an HDR image so attractive. After all, at least one competing recorder has an OLED display, which, on paper, is capable of creating absolute zero light output when displaying black. This implies a truly infinite dynamic range, but common OLEDs still aren't bright enough to qualify as an HDR display according to the currently-understood meaning of the term. 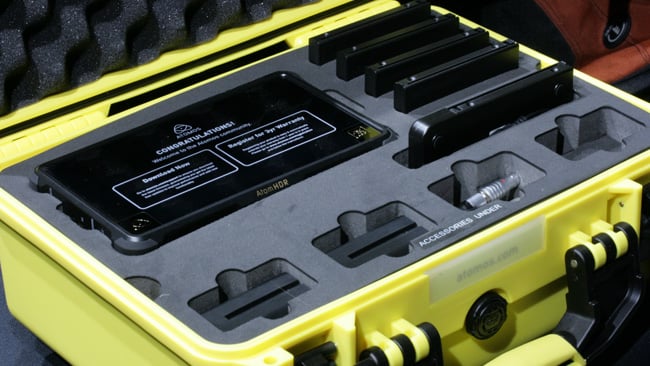 The Shogun Inferno is shipped in a tidy case with batteries, caddies and a card reader. A two-channel XLR input cable is supplied

The Inferno display is an LCD with a backlight powerful enough to achieve 1500 nits (the unit of monitor brightness that's equal to candela per square metre). Basic numeric comparisons aren't necessarily that illuminating (ha!), but the comparison with standard dynamic range displays is stark. Rec. 709 displays are properly calibrated to something around 100 nits, although home TVs, and particularly computer monitors, are often several times brighter. This might make it sound like the Inferno puts out 15 times more light than a Rec. 709 display, and, yes, when appropriate, it can absolutely do that. In terms of what the peak brightness looks like to the human eye, it's a little bit less than four f stops brighter and probably looks like about four times the sheer power.

The very best HDR displays, such those shown by Dolby, achieve huge output up to 4000 nits, which might make the Inferno display seem underpowered until we realise that one key standard, SMPTE ST 2084, is based on idealised 10,000 nit displays which have never existed. It's understood and normal that various HDR displays have varying capabilities – Sony's gold standard BVM-X300 is a 1000 nit display, albeit with the excellent black performance of an OLED. There are also practical limits on what can be done, especially in something that will be powered by batteries and carried around.

The new HDR page in the menu is perhaps a little crowded, but there are necessarily a lot of things to set up

Peak brightness, though, is a simple headline figure, and HDR is about more than just that. In an ideal world, we'd combine that high peak brightness with black levels as near to zero as possible. With the technology currently available in a portable device, there is inevitably a degree of compromise here. Contrast ratios around 1000:1, equal to about ten stops, have been common in LCD displays for some time and that's broadly what the Inferno display (and practically every other conventionally backlit LCD used for HDR) can do.

Anecdote suggests that a high peak brightness, which the Inferno display has, can subjectively compensate for black levels which may be slightly higher than ideal. Either way, until very high brightness, very small OLED displays become practical for on-camera monitoring – which will be very expensive and possibly wear out quickly – the Inferno's performance more or less represents the state of the art.

Making use of this display capability is complicated by the fact that there is really no standardised way of providing on-set monitoring of HDR camera output. This statement is likely to draw a storm of protest, so let's be clear: yes, there are HDR distribution standards, perhaps the best known of which are PQ (for Perceptual Quantization) and HLG (for Hybrid Log-Gamma), and we can convert the log output of any camera to those things, but there's generally a creative intent inherent to that conversion. What we might reasonably want is a way of monitoring live images that allows the cinematographer to view the entire dynamic range of the camera without having to resort to viewing a flat, grey log image on a conventional display.

Now, the display on the Inferno won't be capable of showing absolutely the entire dynamic range of many cameras, since it has a dynamic range of around ten stops, and any reasonable cinema camera will exceed that. However, the Inferno can completely eclipse a standard dynamic range display; the question is how the picture gets from the camera manufacturer's log format to something viewable as an HDR image. 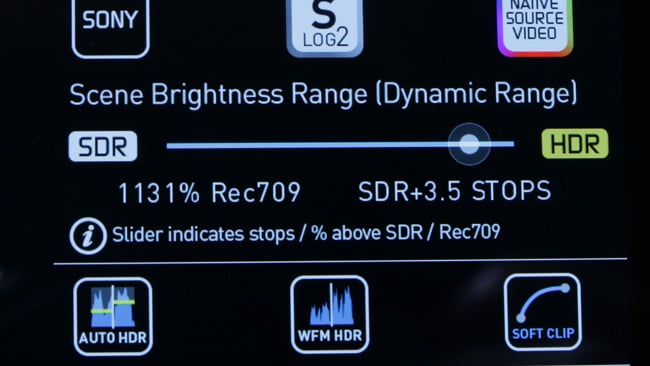 To solve this, Atomos has developed an approach it refers to as AtomHDR. The user must inform the Inferno of the camera and settings that are in use, so it can use manufacturer-specific information to recover the full range of luminance information from the signal and present it on the Inferno's HDR display. It is naturally possible to do this sort of thing on other HDR displays with lookup tables, but the Inferno makes it very easy; it is possibly the only really push-button HDR monitoring solution currently available. Many popular cameras are supported. It's probably best to consult Atomos' site for the most recent information, although Blackmagic is a notable omission.

There are two key related features. The first is the brightness range slider which, at its minimum, causes the Inferno to clip the incoming signal to a Rec. 709 luminance range. At this point the Inferno behaves essentially as a very high brightness Rec. 709 monitor with a log-to-709 lookup table selected, which looks harsh but will be useful as a viewfinder in bright outdoor conditions. Moving the slider up reveals more and more highlight detail until, at the maximum position, all of the luminance information output by the camera is displayed.

A cinematographer might leave the slider slightly below the maximum position, safe in the knowledge that all of what's being seen is being recorded, plus a small safety margin. In many ways the AtomHDR feature is easy to understand – it's an HDR display with specific support for the log output modes of various cameras, much as a conventional SDR display supports common SDR output modes, such as Rec. 709. The only difference is that Rec. 709 is standardised across cameras, whereas the Inferno must know what the camera's output is before it can be meaningfully displayed. 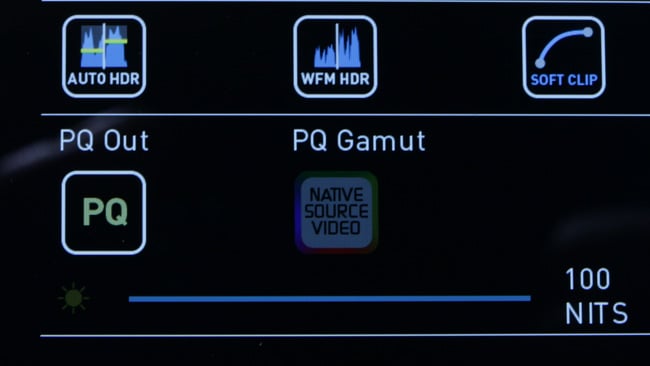 The second neat trick is that Inferno is capable of outputting PQ-formatted images to downstream displays, which might be either high-end professional monitors, or possibly low-cost domestic HDR TVs, which are likely to support PQ. Atomos has anticipated Inferno being used as an affordable grading display where people need to create an HDR output of a production, so this feature might be used either to feed on-set monitoring or a client display in post. 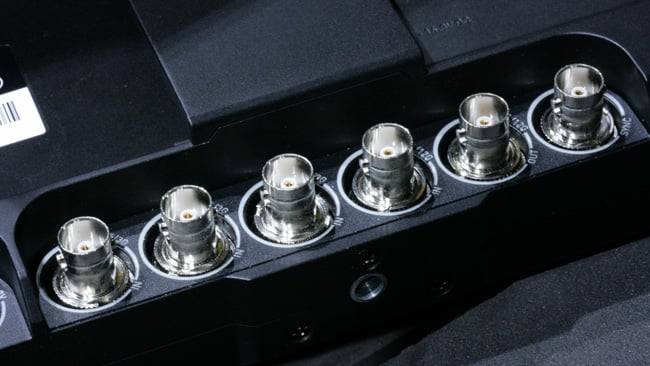 SDI input capability is significantly improved over the original Shogun, although firmware updates will be required to make the most of it

The hardware itself is clearly a complete redesign aimed at increasing overall capability. There are a few changes to physical layout, including the addition of a second battery bay and a new frame design which wraps over the edges of the display panel, which was terribly easy to damage on the original Shogun. The software is broadly the same as that on the Shogun and Ninja Assassin (higher frame rates, including 4K at 60p, are a new feature), with an extra page tacked on for the HDR features.

The HDR controls are small enough to be slightly fiddly, but as these are once-a-day settings it's not the end of the world. We could reasonably contend that Atomos's longstanding user interface paradigm is becoming slightly (if only slightly) overloaded with the features of its modern recorders and, as with the recent UI changes to Blackmagic's Ursa Mini, it wouldn't be surprising to find that the next version of the Shogun firmware involved a complete refresh of the layout.

Clearly the extra capacity only make sense if we assume that firmware updates with significant new features will arise. Pragmatically, it's a reasonable business proposition for Atomos because it would allow it to directly challenge some of its most feature-packed competitors. Recent performance has been encouraging, with various anamorphic de-squeezing options, genlock, LUT baking and updates to raw handling in the 6.4 update.

The only problem that may be tough to fix with firmware is that the Inferno is fan-cooled. There's temperature-sensitive speed control, but it is possible to imagine fan noise becoming a concern during quiet interior scenes in a hot room. The cooling requirements, regardless, are a side effect of the capability. Atomos's recorders have climbed the feature-set totem quite quickly, from its early, small-screen efforts to the Inferno which, with more code, could spar with the best on the market in terms of feature set. Right now, anyone who needs HDR, or even just high-brightness monitoring, might reasonably consider $1995 a decent price, especially given the compatibility with low-cost, commodity flash, which improves value significantly.

If we're allowed a brief digression from review into prediction, if that firmware potential is tapped, then that new value proposition will become really very attractive indeed.