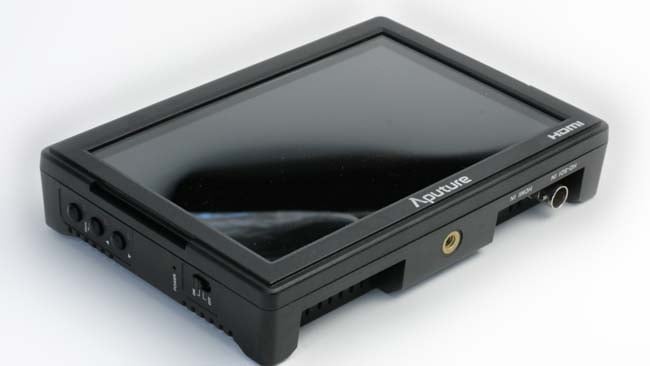 RedShark Review: Phil Rhodes takes a close look at the Aputure VS-5, a 'DSLR monitor' with SDI input that's a surprising budget option for HD productions.

Aputure's own site refers to the VS-5 as a DSLR monitor, which is probably underselling it a bit. Few DSLRs have SDI outputs, for a start, and the VS-5 will accept SDI input, so really it's completely legitimate to think of it in the same way as any other production monitor. Of course, that's also the problem: since tablets and smartphones made it worth developing and manufacturing seven-inch HD displays, lots of companies have brought out displays based on them. The thing that differentiates the VS-5, and the goal that Aputure is unmistakably going for, is price-to-performance ratio. As we'll see, for what it does, it's very affordable.

Despite the slightly confusing model number, the VS-5 is a seven-inch display. It's an example of a specific variety of seven-inch LCD displays that's based on the common computer-oriented 16:10 aspect ratio. This seems trivial (even disadvantageous), until we realise that it results in a panel that's actually 1920 by 1200 pixels, which leaves room for status information at the top and bottom on the VS-5, without obscuring any of the HD picture, which is shown at full resolution. The VS-5 doesn't yet offer the ability to scale down and view 4K pictures, as we could with something like an Atomos Shogun, but apparently that's to be addressed in an imminent firmware upgrade. Now, that's predictive, but Aputure has just done something very similar for its VS-2 display, which at least demonstrates a track record of providing new features. As reviewed, though, it's a full resolution HD display.

The 1920 by 1200 pixel LCD panel leaves room for status information
(here, the assignable button status) without overlaying the image.

Really, though, it's a waste of talent to use the VS-5 in that way. It's at this point that we get down to the test and measurement abilities. It may not be quite the lowest-cost way to own a waveform monitor and vectorscope, but if any reader knows of an even cheaper option, please let us know in the comments. Test and measurement displays include an RGB parade, overlaid RGB waveform, histogram and waveform monitor, with the usual selection of zoom and false colour modes alongside peaking and zebra stripes. 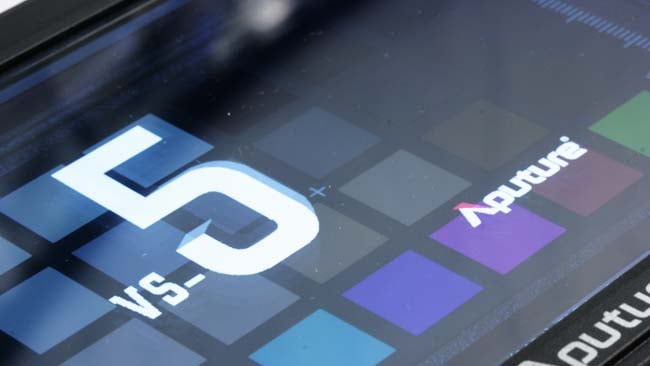 Waveform monitoring and vectorscopes are mathematically quite labour-intensive and very few monitors, even at rather higher prices, produce particularly high resolution examples of this type of display. The VS-5 behaves similarly, with the waveform and vectorscope updated perhaps every other frame and of noticeably lower resolution than the LCD panel itself. That's pretty normal, though, and that means it's normal on much pricier options – for this money, it's a very credible showing. The test and measurement displays can be viewed fullscreen or as part of a full-info layout, which includes all of them alongside a smaller video picture.

Subjectively, the pictures are pretty good. The visual match to better (well, more expensive) Rec. 709 displays is reasonable, with very little off-axis glare, and the company claims 450 nits brightness. It looks punchy (in fact, a bit too punchy, as you'd expect for a 450-nit display), but it should be obvious that the VS-5 is not intended as a grading reference display. Extra brightness and contrast are useful for field monitors where the ability to see a frame is more important than the nuances of colour. The claim of 160-degree viewability is plausible, although, as with any LCD, there's some small variation in the image over that range. 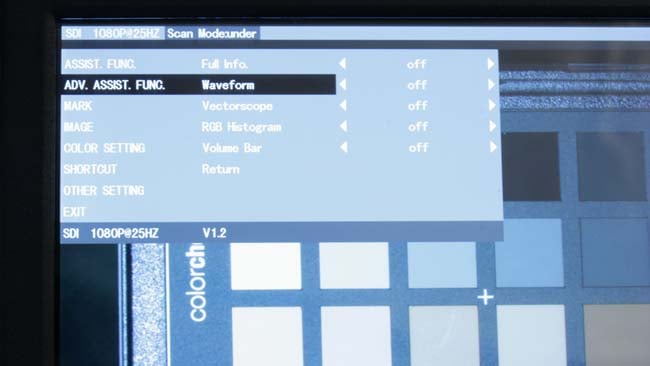 The menu works along conventional lines.

The cost-conscious design is perhaps most visible in the physical construction, which is plastic throughout. Nobody would expect much else at the price and the rationale that it keeps the weight down for DSLR users is... well, pretty valid and reasonable, actually. Use it as a director's monitor on a six-month, round-the-world speed mountain climbing competition and it might end up showing a mark or two, but throw it on a DSLR's hot shoe and the featherweight build probably makes a lot of sense. There are two plates compatible with a variety of Sony camcorder batteries (it'll run from either or both) and a 2.5mm coaxial power connector with creditable 7-18V compatibility. This is less than ideal (really, even with the cost drive, couldn't there have been a latching connector here?), but overall, it's pretty easy to power.

A compatible power cable terminating in a D-tap is part of the accessory kit. The included parts are significant enough to bulk this review out by another paragraph, because they're pretty comprehensive. HDMI cables are included, including one terminating in a miniature connector suitable for many DSLRs, and there's a neat little pouch to prevent scratches. The main event, however, is the hood. It's possible to pay nearly ninety US dollars for a hood to suit some seven-inch displays, which is a little difficult to square with the amount of technology that's intrinsically involved in a black, opaque rectangular tube. Aputure's design velcros together and snaps onto the front of the monitor, making it easy to remove and store. 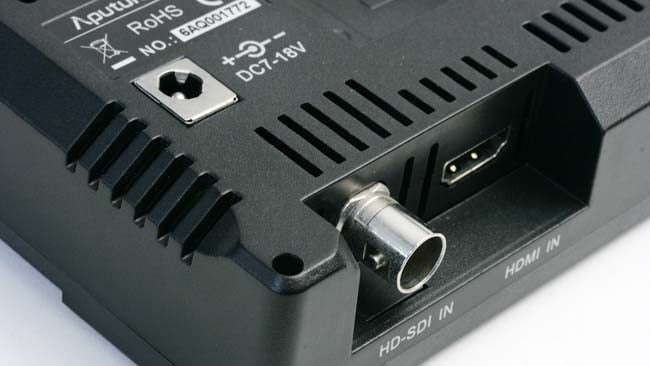 The VS-5 has both SDI and HDMI inputs, although the non-locking power connector is not ideal.

This has become a slightly lengthy diatribe over what's ostensibly a fairly basic display, because when we look closer, it isn't actually that basic. OK, there's no lookup tables, the power connector is a letdown and the build is featherweight, which is both good and bad. Otherwise, it's really a pretty credible option, especially with the upcoming 4K features. The company tells us that this is coming as soon as the next few weeks, so it might be worth waiting to see what happens. One particularly encouraging sign is that Aputure has recognised the growing problem of lag in both displays and cameras; firmware 1.4 for the VS-5 offers reduced latency. Regardless of what happens to 4K, though, the price-performance ratio on the VS-5 is hard to beat and it represents a very affordable way to get into proper test and measurement.