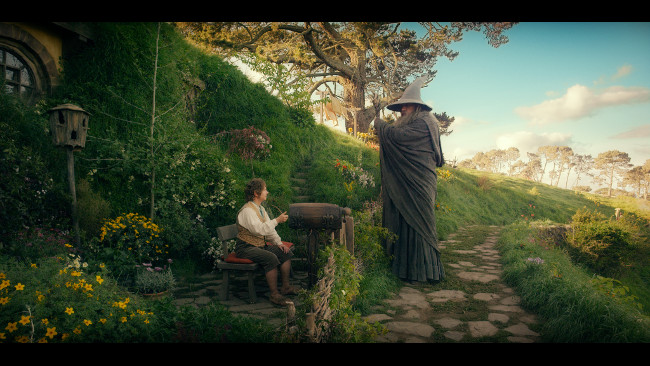 Archive Replay: High frame rate video has been decried by critics as 'uncinematic'. However, achieving quality HFR cinema may be a case of adjusting our techniques (and getting used to it).

Frame rates are a bit of a hot topic at the moment. HFR (High Frame Rate) is a particularly contentious issue, throwing up all sorts of debate about the sanctity of what it takes for something to be considered 'cinematic'.

Of late, it has been filmmakers the likes of James Cameron who have pushed for higher frame rates to be used in cinema. But the first real casualty of what may turn out to be a long battle was Peter Jackson, whose Hobbit films came in for a critical mauling over their use of HFR. So bad was the initial critical response that most cinemas chose to show the 24fps version of the film.

Lately, we may have another potential casualty on our hands and it is one that may need major surgery to revive. Ang Lee's Billy Lynn's Long Halftime Walk was touted as the ultimate demonstration of HFR technology. Filmed in 3D at 120fps and switching between many frame rates throughout the movie, depending on the scene, this was always going to be a bold experiment.

Some of the reaction against the film has used language that I won't quote here. Suffice to say that it has raised the blood pressure of many a critic. One of the milder criticisms was from Daniel Engber of slate.com, who said "the scene looked queer, uncinematic, like a theater sketch acted out in virtual reality."

It is clear from such reactions, as well as feedback here on RedShark, that HFR is going to be fighting an uphill battle. That much was certain even before James Cameron put his weight behind it. Experiments have been done before in the distant past and failed to gain traction. Oddly, though, when scientific research is performed and subjects are shown isolated HFR material, they usually prefer it to the low frame rate alternative.

So what is really going on here? There are certainly some issues to be addressed with HFR at the types of high rates that were used in Halftime Walk. Using very high frame rates gives a much higher perception of detail, much of which can be accounted for by the lack of motion blur. Sets and makeup that work in traditional shooting look fake at such temporal resolution. An issue that was pointed out repeatedly when The Hobbit was released. Interestingly, the sets in Halftime Walk are also being criticised for looking fake, when in fact most of the film was shot in real locations, precisely because the filmmakers were already well aware of such pitfalls.

Shooting at 120fps also had another unforeseen drawback. Acting gets to be scrutinised at a whole new level. At this speed, we are able to see the most minor, almost imperceptible, facial expression and reaction. The high frame rate also exposes timing, too, both with the acting and editing, as actors sometimes appear to be waiting for another actor to finish their lines.

With issues such as these, along with accusations that it looks 'un-cinematic', it is easy to see why it may have fallen under heavy criticism from some quarters. But I do not believe that this should be the end of the story.

An argument that is often used is that film shouldn't be trying to replicate reality. That it is precisely the 'unreality' of 24fps that helps us suspend disbelief and enables us to immerse ourselves in the fictional world before us. However ,I do not believe that HFR necessarily achieves or sets out to achieve reality.

Certainly, things do look more real. That much is certain. But when you play the latest video game on your Xbox, does the high frame rate prevent you enjoying the game? Okay, I concede that a video game is an immersive, interactive experience, that quite often relies on minimal lag times. But the fact remains that the higher frame rate does not take you out of that world of fantasy. Remember, too, that Halftime Walk is also an immersive experience, shot as it is in 3D.

How we see and respond to frame rates, I think, is more a cultural thing. Contrast if you will how long the UK and US have been shooting fiction in 24, 25, and 30p, compared with the Japanese, who have no issues at all with television drama being filmed in 60i. I am a believer that culture can be changed. It just needs the right person to produce the right thing in order to set off a 'light bulb' moment in all of us.

Ang Lee was certainly a brave soul for pushing to shoot at 120fps. It is very clear that accepting the use of HFR for fictional production, particularly for cinema projection, will take a very long time indeed and, in fact, might never happen. But then we already know the dangers of using the word 'never'! However, mindsets are pretty set in their ways at present and, unfortunately, such a critical reception could harm and put back HFR development. This would be a shame, because there are many areas where it could be used incredibly effectively, far more so than in the production of fiction.

The BBC is about to showcase its long awaited Planet Earth 2. The original series was grounbreaking and breathtaking to behold. It surely must have sold a heck of a lot of HD televisions at the time! Now, imagine watching something such as this on a huge screen at 120fps. If you ever wanted to get up close and personal with wildlife, this would be the way to do it.

The counter to this may well be that Planet Earth is still cinematic, both in its scope and the way in which it is shot and, therefore, lower frame rates should be the way to go for such a programme. However, a glimpse of how amazing the natural world can look in HFR can be seen on something as simple as the Apple TV screen saver. For those who do not own one, some of the shots used for these are absolutely stunning. Filmed at 120fps with a Red Dragon and played back at 60, they give an ethereal HFR slow motion effect, which is wonderful to behold.

The last aspect is one of influence. An important question that needs to be posed concerns whether the advance of HFR is being artificially halted by film critics and film nerds. Is it possible that the average casual cinema-goer actually prefers HFR? This is the type of person who may regularly play games or is maybe of a younger generation who doesn't have the emotional attachment to 24p that exists in the world of the older film fanatic? Witness, too, the number of televisions with 120fps interpolation, which many people, with the exception of nerds like us, leave on and live perfectly happily with.

I once had the experience of turning this feature off on somebody's television, only to be told to turn it back on because the picture now looked hideously jerky! They had bought the TV because they loved how the high frame rate interpolation looked in the shop. It is clear, then, that HFR does, in fact, have its fans. And it is clear that directors such as James Cameron still wholeheartedly believe in it, with Avatar 2 forthcoming…at some point.

The beauty of HFR, just like HDR, is that many current cameras are already capable of shooting it, even up to 120fps or more. Just like HDR, it is the final display that is the current choking point, although this is quickly changing. The real question is not if we should use it, but how do we use it?

For fictional film, this will be a debate that will rage for many years. But it is very clear that perhaps for such applications, we need to stop thinking about producing stories in the traditional way. I have made this point before. But it should be remembered that when HD came out, make-up artists and actors alike dreaded it. Many changes and modification to technique had to be made to accommodate the new, higher resolution.

With HFR, the problems go much deeper. Actors will have to finely refine their skills and maybe change their technique greatly or entirely. Remember that when sound was brought into films, many actors who were previously stars simply couldn't cut it in the new age of audio. Perhaps HFR will truly show who the best actors really are!

Editors, too, may have to find a new editing language to make cuts work well. This is no bad thing. With locations being criticised as looking like fake sets, despite being real places, perhaps this also puts lighting in the spotlight.

What we must take account of is that, in traditional film, we need to exaggerate things to make them seem larger than life on a flat, relatively dull screen. Such practices for HFR, it would seem, has the effect of making things look false. There is precedent for this, with softer, more subtle lighting becoming the new norm for HD shooting. With the addition of HDR into the mix, the picture will automatically have a depth and quality we could have only dreamt of previously, even without 3D. So perhaps everything from make-up, acting, all the through to the lighting, needs to be toned down and rethought. Again, this is no bad thing.

There are those who will never accept HFR as a valid way of shooting for cinema. But personally, I like the variety and the fact that it is available as an artistic option. The idea that you won't watch something because the director chose a frame rate that you do not like seems terribly closed-minded to me. We shouldn't write it off. It is still early days and filmmakers have yet to find the best way to apply it and the techniques required to shoot it well. It may also take a generation to redefine what is culturally acceptable, while us old fuddy duddies bemoan what things were like when we were lads. And, as I mentioned, fictional film is not the only type of production in the world. There are many to be explored beyond that.