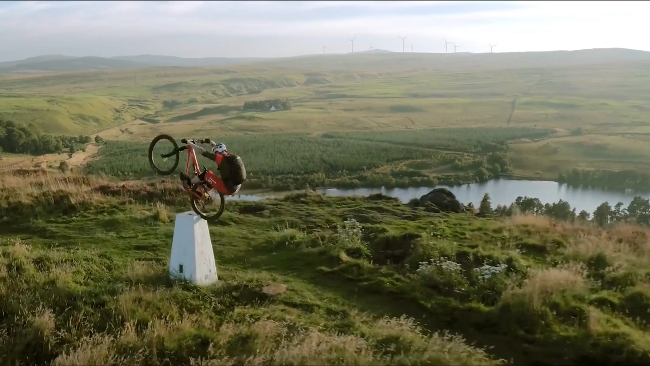 Legendary mountain bike rider Danny MacAskill has a brand new video up on YouTube: a beautifully shot collection of outrageous stunt riding shot in the ridiculously picturesque landscapes around Edinburgh in Scotland.

It’s at this point we have to make a confession. We watched the first few frames of this and thought “Great, this must be stuffed full of GoPro shots, he’s even got one on his helmet. We can write about the future of POV cameras with all the next generation units suddenly on the market’.

Sadly, there wasn’t a single POV shot that we could detect.

“That’s grand,” we thought, “let’s write about all the drone shots in there.”

But while there are definite aerial shots in there, we can’t say that there’s anything bravura: drones are so much part of the average production kit now that their use is much of a muchness.

About 4:30 in we start getting the ‘making of’ shots (these are the bits where Danny falls off his bike — a lot). Now here we get a few glimpses of monitor recorders, and it looks like that is something possibly Sony shaped on a stabilised rig, but there’s nothing definitive, nothing that we can really hang a hook on and say “This is the new way to capture action video.”

In fact the only thing that there is that makes it a RedShark story is that you can watch it at 4K if you have the monitor for it. Oh, and it’s also really rather nicely shot and graded. And it’s really just very good. In fact, as action filming goes, this is absolutely up there with the best of them.

For the moment, that will just have to do.