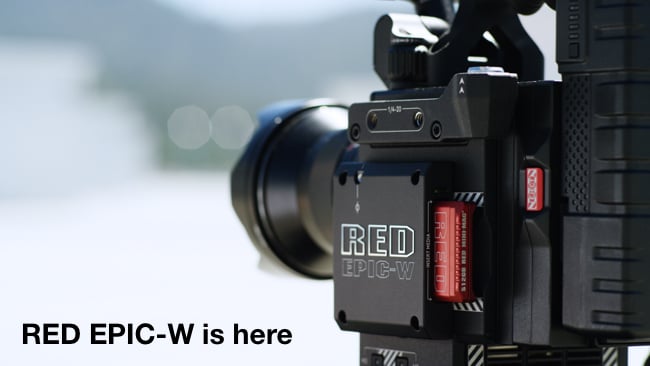 Continuing our series counting down our Top Ten stories from 2016 with RED, which announced in October that it was shipping two new 8K-capable cameras based on the HELIUM S35 8K sensor and built around the DSMC2 form factor: the $29,500 RED Epic-W and the latest $49,500 8K WEAPON.

RED has been going through something of a renaissance lately. The new DSMC2 form factor is consistent across all their new products and this has encouraged a thriving third party development community. There is a new sense of openness in the company, and they seem eager to tackle the modern cinematography market head-on.

And the way it's doing this is about as far as you can get from a plaintive “we’re here too” approach as you can possibly get. It’s pushing technical and cultural barriers and refusing even for milliseconds to sit back and say “that’s it for now”.

In July, we carried news of the new HELIUM 8K S35 sensor from the Irvine-based camera company.

Today, RED has announced that two new 8K-capable cameras are shipping: The RED Epic-W and the latest WEAPON. Both cameras are consistent with the DSMC2 form factor, and both sport the HELIUM S35 8K sensor. That’s right: two 8K cameras in the same day from a single company.

The EPIC-W 8K S35 can capture moving images at up to 30 fps and take stills with a resolution of over 35 megapixels. (This really brings home the reality that you can now make video with the same resolution as the very latest DSLR cameras).

The Super 35mm sensor means that a vast range of lenses are compatible with this camera.

In addition to its 8K talents, the EPIC-W can capture 4K to Apple ProRes or Avid DNxHD/HR up to 30 fps and 2K in the same formats at up to 120 fps, with a maximum data rate of 275 Megabytes per second.

The EPIC-W costs $29,500 for the camera BRAIN (remember that you will need to consult the list of accessories to get a full camera kit).

Jarred Land, President of RED Digital Cinema, said this about the new cameras:

“From the very beginning, we’ve strived to not only develop the best imaging technology on the planet, but also make it available to as many shooters as possible. The WEAPON remains our premier camera — and now comes with the option to either go with the 8K HELIUM sensor or 6K DRAGON sensor.

“Since we began shipping the EPIC in 2010, it has been the workhorse camera of the industry,” continues Land. “Our latest camera, the EPIC-W, continues that legacy and features our current-gen DSMC2 form factor as well as the 8K HELIUM sensor."

RED has a comprehensive upgrade policy for RED owners, starting as low as $14,500, which can be found at www.red.com

We’ve written a lot about 8K but it seems that RED is doing more to make working in this ultra-high resolution practical than any other manufacturer right now. Of course, not everyone needs 8K yet., but it does have advantages. 8K makes images sharper and yet smoother at the same time while capturing 17x the detail of HD. It may be a while before everyone’s using it, but those who would like to try it now can do so, and that in itself is quite remarkable.