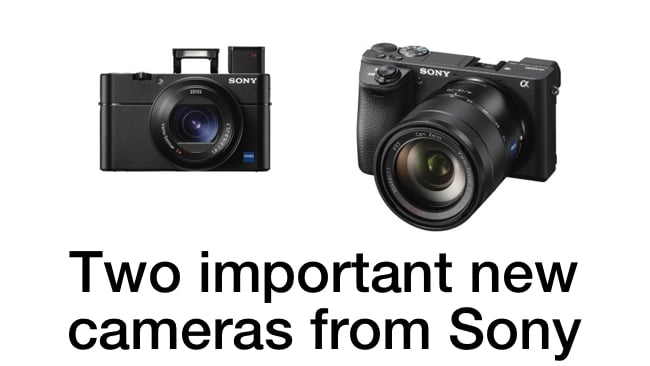 Two new significant camera have just been announced by Sony: the RX100 V and the Alpha 6500

Two new cameras have been announced today by Sony in a super-confident demonstration of Sony's commitment to still and moving imaging in the same camera.

The RX series is remarkable for at least two things. one is that it has gone through five generations now in a remarkably short time, and the other is that the Mark I is still in the shops and is simply an amazing bargain able to shoot very good HD in a tiny camera.

4K recording is via subsampling from the full sensor resolution. The Sensor is a 20.1 MP 1-Type. Cinema style shooting is via S-log 2

The other camera announced by Sony today is the Alpha 6500, and APS-C sensor shooter with "the world's fastest AF speed" and the "highest number of AF points".

The new Alpha model has 5-axis in-body stabilisation and has a 24.2 MP Exmor CMOS sensor.

Moire shouldn't be an issue, with the full 6K sensor being downsampled to 4K in-camera.

The fast focus capabilities also apply to video. HD is available at 100fps at bitrates up to 100 Mbit/s.

Watch out for the full details in RedShark soon.