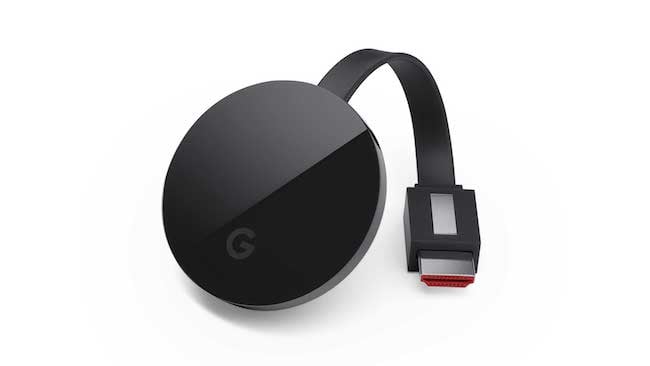 Two significant events in the path towards rolling out higher resolutions occurred yesterday: overshadowed perhaps by its new Pixel phone, Google announced a 4K HDR version of its Chromecast dongle, while in Japan NHK unveiled a dual 4K/8K set-top box.

Google made a good job of going after both its high-tech rivals yesterday — Apple iPhone with the Pixel phone and Amazon Echo with its Google Home speaker — but in one significant way it stole a march over both of them with the announcement of the 4K HDR Chromecast Ultra.

The new unit is double the price of the existing Chromecast — $69 in the US, £69 in the UK — but still significantly cheaper than, say, Apple’s fourth generation AppleTV, which starts at $149 (coincidentally, the third generation, cheaper model of that was discontinued by Apple yesterday). Chromecast Ultra will be able to stream 4K content from the likes of YouTube Netflix, and Vudu at launch, Google claims that improved WiFi connectivity means that it is 1.8x faster at loading video than the previous model, and it will support both HDR10 and Dolby Vision HDR formats. Pre-orders open in November for December shipping.

It also features an Ethernet port housed on its power adaptor, presumably to help cope with the extra bits and bytes that the 4K signal is going to require. And yes, it is integrated with Google Home so that a verbal request for content can be fulfilled by the device.

Meanwhile, in non-trying to establish a complete home ecosystem news, NHK’s prototype box is being showcased at the giant CEATEC technology show in Japan. Created in partnership with Jupiter Telecommunications, which has itself been running a 4K VOD service for over a year, it marks the first use of the channel bonding technology developed by NHK for splitting 4K/8K signals into multiple cable TV channels (which, of course, has the advantage that it can utilise existing TV facilities and transmission infrastructure in their present form for future 8K broadcasts).

Sky’s satellite equipment in the UK does the same sort of thing, splitting a 4K signal into component HD streams, but this is the first time it has been used for 8K. “Now all the main modules for 4K/8K reception on cable TV are ready,” says NHK, with the next milestone set to be the development of a commercial version and the start of dual format broadcasting.

With thanks to Advanced Television for the NHK heads up