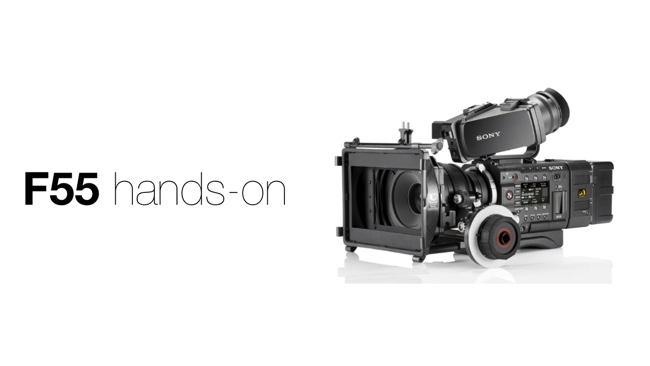 We’ve covered the PMW-F55 and its sibling the PMW-F5 since the product announcement but as Sony approaches its targeted February release date, select DPs and reviewers are getting a first look.

My friend and noted DP Timur Civan joined me in an afternoon of mostly touring the camera and in some shooting in XAVC 1920x1080 as well as 4K Raw modes.

Timur shot a tour of the camera and its menus on his iPad while in dialog with me and you can see the video at the bottom of the article. Please note that I have learned more about the camera since narrating this clip and will be releasing a version with some corrections and modifications.

Since camera and firmware are still pre-production, we are unable at this point to show any of the footage, which was just consisted of random shots in a New York city park along the Hudson and on a very cold cloudy and dreary day at that.

But I have some first impressions of the PMW-55 and the associated accessories to share.

The camera is surprisingly light despite a solid build around a metal frame. Adding the modular battery mount or 4K recorder plus battery still left the camera perfectly balanced. The new 85mm prime lens answers many of the objections about the prior Sony lenses, namely the plastic construction. The lens, however, could use more witness marks. These could always be drawn on the lens, but cinematographers would definitely want to see more precise focal distances. But optics were absolutely sharp and focus/aperture motions felt solid.

The Olivine battery (rated 75 watts) was of very light weight construction. It powered camera for at least two hours and that included some shooting with the 4K recorder.

The combination of the deep menu structure and the ready controls on the operator’s side panel made controlling the camera much easier than with the prior generation PMW F3. Some comments, however, suggested that like Alexa, Sony should have also put controls on the dumb side of the camera to avoid AC interference with operator.

We will eventually have footage to show and be able to offer more in depth coverage of release versions of both the F5 and the F55. Meanwhile, join me in a tour of the camera features and menus.