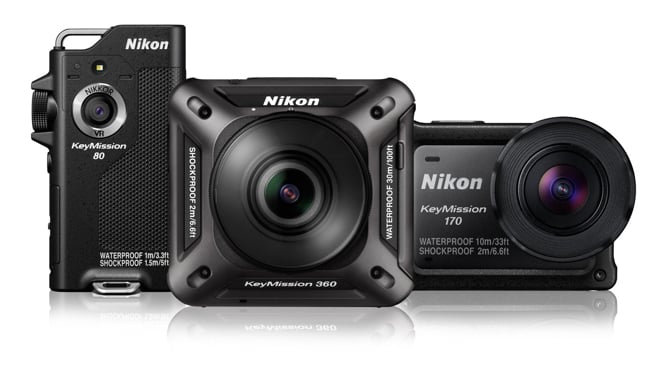 The Nikon KeyMission range has been expanded to three models

One way or another it’s been a busy month in the Action Camera market, with new models from Garmin, Sony, and, of course, GoPro. And at Photokina last week, Nikon launched two new models as well.

You’d be forgiven for missing the announcement given everything else going on at Photokina — we have to admit we did — but Nikon has added the KeyMission 170 and KeyMission 80 to its new wearable Action Cam range.

In some respects this is an entertaining reversal: the $500 360-degree version, the KeyMission 360, was actually announced earlier this year (and it shipping in October), with these two being unveiled in its wake.

As the name suggests, the shockproof and 10 metre waterproof KeyMission 170 captures 170° wide-angle video in 4K. Additional features include shooting modes such as Slow Motion, Superlapse movie, and Time-lapse movie, with slo-mo up to 240fps taking resolution down to 720p. A separately sold case takes the depth down to 40m, while base price is a keen $150. WiFi and Bluetooth connectivity is built in.

Less obviously, the $280 KeyMission 80 is the ultra-slim entry in the range. Featuring an exclusively-designed small NIKKOR lens for high quality images, it is also equipped with a second camera with 4.9 million effective pixels and an LCD viewing monitor for easy selfies. It is, however, limited to 1080p video and 12MP through its main chip, though hopefully the electrical and optical stabilisation it also features will somewhat take the sting out of that.

Both the KeyMission 360 and KeyMission 170 support the SnapBridge 360/170 app, which enables remote shooting and editing. KeyMission 80, meanwhile, supports the plain SnapBridge app, allowing the camera to be constantly connected to a smart device and automatically transfer photos.

The company has also introduced the ubiquitous wide range of optional mounts and accessories, including vented helmet strap mounts, chest mounts and surfboard mounts (and indeed, the KeyMission 80 attaches magnetically).