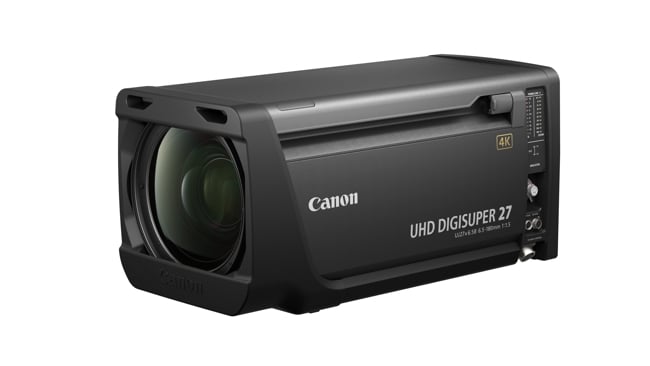 When you’re attaching lenses onto the front of TV cameras and mounting said cameras on pedestals, you can get quite serious about the glass inside them without worrying too much about whether someone can carry them about too easily. All of which helps to explain why the new UJ27 box lens weighs in at a fairly impressive 21.5kg.

The UJ27×6.5B IESD, to give it its full title, employs ultra-low dispersion and fluorite glass, plus undergoes an enhanced polishing process that Canon says produces even smoother, optically true glass. The result is reduced internal reflections, ghosting and chromatic aberration.

It’s not just glass in there either. The UJ27 uses Canon’s Constant Angle Focusing System (CAFS) that harnesses the power of a 32-bit CPU to eliminate focus breathing.

This sort of lens is, of course, aimed primarily at sport, where the focal length of 6.5–180 mm (13–360 mm using the built in 2.0x extender) represents a nice middle ground between being able to to capture close-ups and long pans. It’s by no means at the top of the scale — the company’s UHD Digisuper 90 boasts a rather jaw-dropping 90x zoom from a 9mm to 810mm range — but what it lacks in sheer zoom power it gains in flexibility, making it far suitable for more in-stadia camera positions.

Availability is June next year, which seems quite a long way out, and prices will be set at dealer discretion but probably be somewhere around the £50,000 mark.