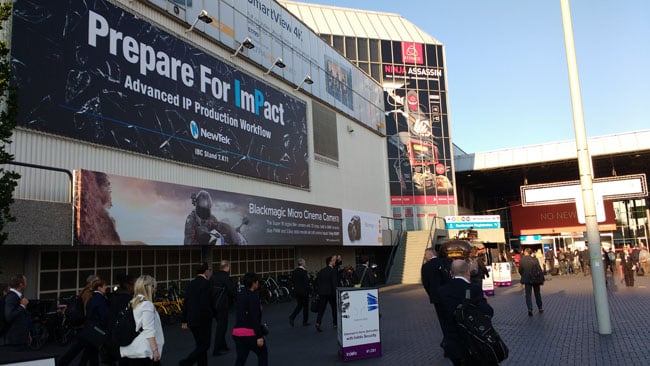 Opinion: On the verge of IBC2016, Phil Rhodes says that our fixation on the latest and greatest gear may cloud the fact that there are plenty of great options already out there.

Some artforms use tools. Some of those tools are expensive. In any circumstance where something is expensive and helps people do desirable things, there is likely to be a culture of aspiration and interest around it. Practitioners of the art in question (and people who aspire to their results) are likely to become extremely, even excessively, interested in the characteristics and capabilities of the equipment. This certainly applies to music. Even where financial barriers to entry are very low, right down to watercolours, there's probably still a nagging feeling that a slightly more expensive brush might have improved things slightly.

If filmmaking is not among the best examples of this, I'm open to alternative ideas.

Any trade show has, at least, an undertone of this sort of thinking going on. This year, the principal buzz at IBC is actually most likely to be video over IP, a technology that's mainly of interest to studio and outside broadcast providers. While it's likely to be a few years before the wider world of commercial, off-the-shelf networking equipment catches up with compatibility and achieves the cost savings that have been widely discussed, the standardisation process for IP has now reached a point where mainstream implementation should start to become possible. This is a fairly dry infrastructure topic, albeit one that's likely to make some very big waves in broadcast installations over the next decade or so.

Regardless of what happens in Amsterdam, we're about to enter the yearly cycle of events. Lots of very capable professionals will be working hard to push what we might call the 'equipment agenda' in a multi-day festival of gear-lust, something designed specifically to encourage the saucer eyes of the proletariat to be turned longingly upon new toys. To some extent, there's nothing wrong with this: people develop new products, those products need to be deployed and that won't happen unless they're promoted.

In any situation like that, however, it's incumbent upon practitioners of an artform to maintain a healthy – well, 'skepticism' is a strong word. Still, much of the most prominent prior art of filmmaking was produced decades ago, when very few of the new devices soon to be announced would have been even a twinkle in anyone's eye. We should remember that what is considered desirable now was largely defined by productions that weren't reliant on today's latest innovation.

With that note of caution sounded, let's think about some releases which have already been announced. Canon has been very busy recently, breaking news of its new revision of the 5D DSLR, as well as the C700 cinema camera. While the latter, in particular, seems designed to answer several of the ergonomic criticisms of its predecessors, neither camera particularly seeks to push the bleeding edge of price-performance in terms of sheer featureset. This sort of decision-making serves to remind us of the imminent, if not yet quite there, maturity of camera technology. People used Canon's C-series cinema cameras because of the way the pictures looked, not because of the sheer spec, and certainly not because of the slightly oddball (though now fixed) ergonomics.

It seems possible, then, that at least some manufacturers have realised that the numbers game, in terms of promoting cameras, will imminently hit brick walls of practicability and desirability. It is much more persuasive, to the more objective practitioners of an artform, to discuss the creative characteristics of a tool. Until recently, resolution was saleable. No more.

For another example of a company being aware of this, consider Cooke. The company has never chased absolute optical transparency. It has already announced the re-release of its Speed Panchro range, which is an even better example than its popular Series 4 lenses. Are the Speed Panchros likely to be the sharpest, most colour-neutral lenses in the world, with the best aberration control and greatest corner sharpness? No, of course not, that's not the point. Nor was it the point with the anamorphic range.

So, perhaps, that post-scarcity world we've discussed before is upon us. This sort of thing is often difficult to identify in the moment, being easier to define in retrospect, ten years hence, as we've been able to do with audio gear. For now, though, let's approach the upcoming trade show season in the knowledge that almost all cameras can answer questions about resolution and dynamic range with a simple response: "they're more than sufficient." And let's tolerate the idea that our assessments will be subjective, that our opinions will be open to question and that the best options for different situations will not always be the same.