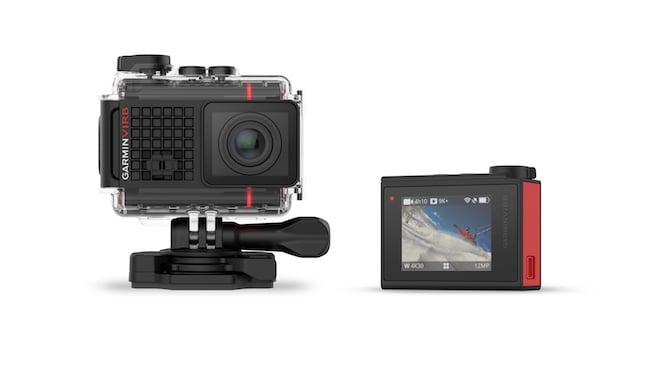 Like many companies that find themselves suddenly marooned up technological cul-de-sacs, Garmin has been trying to port its navigational expertise into tangental markets, and with the new VIRB it may just have struck gold.

GoPro has, of course, been somewhat under siege in the action cam market for some time now, and with the VIRB Ultra 30 Garmin is doing the equivalent of deploying the trebuchets and war elephants to try and tear down its ramparts.

Waterproof up to 40m in the included case, the $499 unit boasts some interesting features above and beyond the expected GPS tech, though that’s cool enough; the unit gathering data to show how far, how high, and how fast the camera’s been going at any one time which can all be presented as data gauge overlays. For a start it boasts voice control, though this available in English only. It’s a simple enough execution, as befits commands shouted from a downhilling mountain bike or other perilous mount, Garmin saying it responds to phrases such as “OK Garmin, start recording,” or “OK Garmin, remember that,” to tag specific moments from recordings.

Video is shot at 4K/30fps or in slow motion video at up to 240fps at 720p (1080p gets you to 120fps) and it takes 12MP stills, but it’s piece de resistance is probably the 3-axis image stabilisation. This is, as far as we know, a unique aspect of the Garmin: genuine mechanical image stabilisation that goes a long way to ironing out the slings and arrows of outrageous fortune that can bedevil any action cam shoot. According to beta testers it has its limitations — push it too far and your footage will still blur, this isn’t a Steadicam rig after all and it does eat battery — but footage from the unit has looked impressive so far.

Also featuring live streaming via iOS devices, early reports suggest that the accompanying software and app are perhaps not quite as polished as the GoPro editions, but Garmin has also one very pragmatic decision that should serve it it well in the long run: and that’s to make sure that its compatible with GoPro mounts.

GoPro is, of course, hoping to release its long-awaited Hero 5 later this year and occupy some of this amounts itself. And the new unit is rumoured to feature at least some of the features of the new VIRB, notably voice control. It may though have to watch out for a new enemy burrowing under its battlements and placing some explosives marked ‘3-axis’ at the weak points in its defences.