The EOS 5D changed everything, but video was only an afterthought 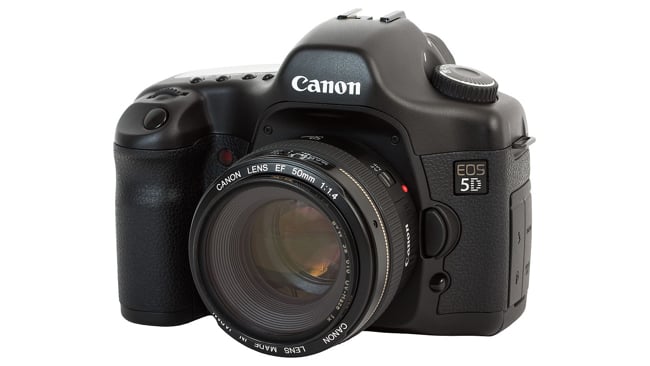 The original EOS 5D that started it all

Opinion: The debate over the video capabilities of Canon’s latest EOS 5D Mark IV seems to have largely lost sight of the fact that, when the EOS 5D range first came out eleven years ago, video wasn’t even in the picture.

I’m an early adopter. I like to buy into new technology as early as it makes sense to do so. I’m really pleased that my Sony Bravia TV, now nine years old, still gives me great pictures. That’s because I bought one of the first TVs with full 1080p HD. Earlier sets were only 720p

And I bought a Canon EOS 5D. It wasn’t called the Mark 1 then because it was the first of what was to become a dynasty of very fine cameras. If you have never seen a Mark 1, you might be wondering about its video capabilities. From today’s perspective, it’s kind-of surprising to discover that there were none. That’s right: the first 5D offered absolutely zilch in terms of video capture.

At the time, that was perfectly okay for me. If I wanted video I would have bought one of the many DV cameras on offer. They were of course strictly SD at the time but an obvious choice for video makers.

The 5D MK 1 was a great camera. With a nearly 13 megapixel sensor and and (from today’s perspective) a surprisingly decent dynamic range, it had all I needed to shoot some really good still photos. Coupled with one of Canon’s red-stripe “L” lenses — a wide angle zoom — it was all I needed at the time. I kept it for a few years and then sold it for a surprisingly high price. Don’t let anyone try to tell you that nearly 13 megapixels isn’t enough. Sony A7S users will confirm this.

So, my take on the MK II, when it came out in 2008, was rather different to most peoples’. I wanted to see how much better at still pictures it was than my Mk 1.

You know the rest of the story. Included almost as an afterthought (although clearly not, in reality, because of the way Japanese professional equipment is designed, built and tested), the ability to shoot HD video on a full-frame, relatively affordable camera absolutely transformed cinematography for anyone not involved in the high-end of feature film making.

Remember that at the time, shooting HD video at all was pretty exotic. Nowadays, it’s routine to shoot blockbuster movies digitally. Film is now an exotic and expensive option. To be able to capture video that looked like it came from a Hollywood studio was transformative. At almost every level except (and sometimes including) the very top, 5Ds were a universal passport to capturing video as if it were pure cinema.

For a long time, filmmakers were prepared to overlook and live with compression artefacts, moire, softness, and all kinds of drawbacks that are visible from todays perspective. It didn’t matter. What mattered was Cinema. Even (or perhaps especially) in wedding videos.

Meanwhile, the effects of exponential progress meant that other cameras came along. Panasonic’s GH(x) series showed that you can take incredible video from a tiny camera, albeit with slightly less ability to shoot with a narrow depth of field. Sony’s mirrorless cameras burst through the field of runners to become default choices for small-budget, high quality video makers. And — equally important when everything is put in perspective — Blackmagic started making cameras.

All of which means that today, being able to shoot video with a DSLR is simply not so important. I still love the DSLR format, and I might buy a 5D MK IV. But that’s because I love taking still photos. I love video too, and if I need to shoot some 4K, it might well be with a 5D Mk IV. The ancient MJPEG codec is actually a really sensible choice for people like me. I don’t want a complicated workflow. I like capturing stills from 4K video.

For everyone else, there’s a huge choice. Canon has a stellar range of EOS Cinema cameras, and we suspect there’s more to come from them. And other choices are available. The point is that there’s far, far less reason to buy a DSLR to shoot video now than there has been for the last eight years. And there’s far more reason to buy a really good dedicated video camera for a reasonable sum.

Canon realises this. It’s why they’ve dialled back the video capabilities on the new 5D IV. With the new camera, it’s back to how it started out, with a competent video capability for those that need it while they’re using a still camera. And for everyone else, Canon and their competitors have the most incredible variety of video capture devices there’s ever been.