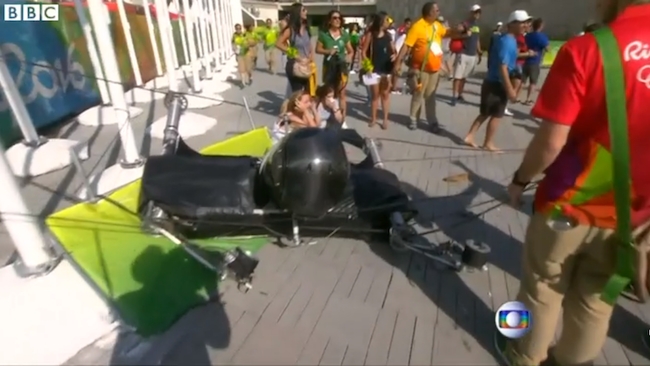 Luckily, no-one was hurt when this cablecam crashed to the ground at Rio's Olympic Park

On Monday, a cable-mounted camera fell onto some people at a big sporting event. Mercifully it seems that nobody has been severely injured, and that's a huge relief for all involved, but it helps to highlight several issues regarding health and safety.

Without information on exactly what happened and why, speculation on ways to avoid exactly this sort of thing happening would be premature. Even so, it's a useful prompt to consider some of the safety implications of some of the things we do. We should be clear that there's no hint whatsoever that anybody did anything ill-advised here, of course, and we can only hope that the particulars of the incident will become public so that we can all learn from them.

Even for the majority of us who aren't involved in the operation of cable-mounted cameras, an understanding of the unpredictable ways in which things can go wrong is always a useful caution. And regardless of the circumstances, for some time, operators of specialist equipment such as cable-mounted cameras and cranes have lived in abject terror of this sort of incident bringing down the heavy hand of regulation (or more regulation) on procedures which have been shown by long experience to be very safe when performed correctly. The core concern, though, is naturally to avoid any harm coming to anyone.

In some ways, a plummeting overhead camera is not an ideal example of the sort of safety hazards that people tend to run into, simply because it's such a clearly visible one. Those risks that are easiest to overlook are generally not those which involve suspending equipment overhead, where the potential dangers are patently obvious. Similarly, things like pyrotechnics, stunts and firearms all present risks which are very clear and also very controllable. They're also fairly rare, given that most productions — apart perhaps from the ones where Michael Bay is involved — don't do them every single day.

Having someone stumble over a poorly-secured cable and break a wrist is a much harder risk to control because it's so much more commonly encountered and so difficult to avoid – darkness and cables are, give or take gaffer tape, an almost unavoidable part of filmmaking. Perhaps a larger concern is the fact that, because the likely threat is not nearly so alarming a prospect as blowing someone up or having a camera dropped on someone's head, it's taken far less seriously. Even so, it's likely to cause more dents in more people in the average year simply because it's so commonly encountered.

In general, then, let's remember the Rio plummet-cam not so much as a reason to be careful about overhead rigging, but as a reaosn to be careful full stop. Most of us will have someone do that for us, and while health and safety is everyone's problem, the key engineering and operational safety issues of specific pieces of equipment are best left in the hands of the people who know it best. Instead, consider the much more common risks associated with, say, crew tucking into a buffet lunch that's been sitting out in the sun for seven hours. The side-effects can be just as injurious to health — and it doesn't smell nearly as good in the aftermath.