Getting a look into the future at the IBC Future Zone 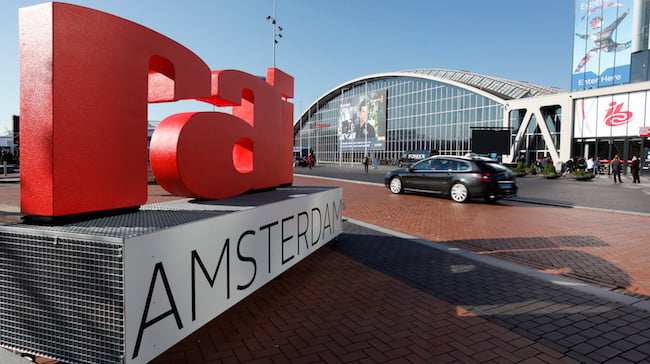 Over the years, those in the know have made a habit of visiting the IBC Future Zone for the very latest news from NHK’s Super Hi-Vision 8K project and a glimpse into the other new technologies that could go on to shape the future of the industry.

Once called simply the New Technology Campus, it’s old name hints at the very fresh and R&D vibe of the small area situated just outside the RAI’s mammoth Hall 8 which now contains the IBC Future Zone. Even in an age of crwod-funding, it’s here that visitors often get to see newly developed technologies way before anyone else outside the labs and the research institutes that have developed them; new tools and techniques that haven’t yet got a manual associated with them; exposed wires and dangling circuit boards; and concepts and new ways of looking at producing and consuming video so fundamentally out there that occasionally you would scratch your head and wonder if you were on the set of a science-fiction movie.

No, it doesn’t all work and not everything you see there is going to go on to set the industry on fire. But enough of it is to generate interest and a visit to the area is always worthwhile: sometimes, just sometimes, you get to see the future of the industry sitting there in front of you.

And over the years, that has been increasingly 8K.

NHK’s Super Hi-Vision has been the star turn of the Future Zone for many years now and it has been fascinating to watch the format’s journey from somewhat outre technology to one that is teetering on the verge of mass market acceptability. It was here that many IBC attendees first saw 8K in the flesh, and it has been here that NHK and its partners have successively shown the progressively smaller cameras and progressively better projection technologies that will make it a reality.

As we approach the Tokyo 2020 Olympics and NHK’s stated deadline for establishing an 8K broadcast service in Japan, the latest developments (alongside what it promises to be plenty of 120fps 8K Olympic footage from Rio) are going to be fascinating, but they’re joined by a raft of other interesting projects too, with HDR and VR now jostling for attention alongside a new breed of interactive television tools.

TrueDR’s 10,000 nit display is bound to be an arresting sight, while French lab IRT b-com is showing a prototype for performing automatic SDR to HDR conversions in realtime. Motion Impossible promises the world’s first solution for remotely moving and stabilising 360-degree & VR cameras on the ground, eliminating vibration and keeping the cameras perfectly level. Swissaudec has developed a codec that broadcasts UHD audio (from 7.1 to 22.2) inside backwards-compatible HD signals in a payload of <2kbps. Encoding and decoding is in realtime. And the EU-funded Project Dreamscape boasts hands-on demos that will include 360-capture, rendering, on-set tools for layout/light/animation in the virtual environment, and live compositing without greenscreen.

Possibly the most intriguing though is BBC R&D’s latest, Project CAKE. The Cook-Along-Kitchen-Experience is a realtime, interactive cookery show that changes as you cook with it using a mix of AV and text. This is the broadcaster's first wholly object-based experiment from production to experience, and will join more established demos of its own pioneering IP Studio architecture and latest investigations into VR.

For more on the IBC Future Zone, click here. And follow this link to register for IBC - don’t forget, entrance to the Exhibition is free if booked before 19 August.