Filtering to match tungsten and daylight 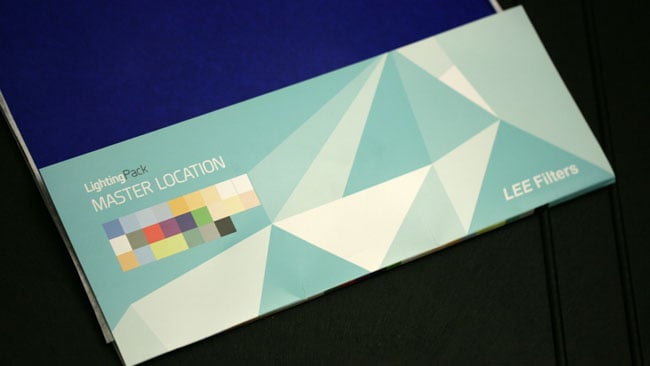 A look at what filtering it takes to adequately match a variety of film lights to tungsten or daylight.

The lighting filters used in this piece are all from Lee Filters' Master Location Pack. For this article, we'll be concentrating mainly on the technical filters. We'll look into the implications of effects filters on various lights in another article. The chart used is X-Rite's ColorChecker Video Passport.

Recently, we discovered that Aputure's COB-120t light offers really good colour rendering, giving us confidence that we won't get a nasty surprise when we use it to illuminate something that's an unusual colour. We call it tungsten-balanced because the light is a simulation of something (tungsten metal, chosen for its high melting point) that's glowing because it's hot. A fire (or a star) is also glowing because it's hot, so what we're doing is creating something that is sufficiently like the sort of light sources our eyes have evolved to use. Many types of lighting have long been accepted as reasonable simulations of either hot metal or a hot star.

Thus, lighting often falls into two camps: tungsten-balanced or daylight-balanced. There's a whole system of films, camera settings and filters, which are all designed with the assumption that one daylight-balanced light has the same performance as another daylight-balanced light, or as daylight itself. When we measure the performance of new kinds of lighting, we're interested in whether that light, in its basic form, is useful – but we're also interested in how well it fits into that system. Some LEDs, historically, have looked as if they should fit the system, but sometimes create hard-to-predict problems. Can we, for instance, use existing colour temperature correction filters to modify the light and will the resulting light match other things it's supposed to? We can with tungsten.

One thing that's clear is that theoretically, a light can generate an output spectrum which includes or omits any colour, so making things match precisely is probably impossible. In order to figure out what we can get away with, let's look at readings of real daylight next to the output of a type of light that we know is reasonable. The device used here is an HMI. 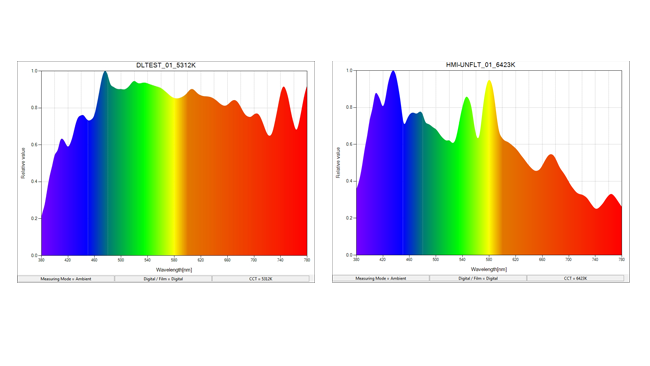 Infrared is often reckoned to begin at around 700 nanometres (though many people can see at least some sort of deep-red glow up to about 1000), so the much lower red output for the HMI is less critical than it might seem. There's also a pair of peaks in the green and yellow which are absent from the real daylight and the HMI's blue output is proportionally quite high. Ultraviolet doesn't really begin until about 380 nanometres, which is right at the left edge of these graphs, but the conclusion is clear: HMI doesn't have quite the same spectrum as daylight. Of course, we know from long experience that HMI is a very useful as a tool for film and TV lighting, so this is a hint at how much error we can tolerate.

What's perhaps more interesting is the colour temperature reported by the meter. Naturally, real exterior daylight has a fairly variable colour temperature, depending on the weather and the time of day. The graph shown here was recorded around midday on a clear July day in southeastern England, resulting in a CCT very close to the 5600K, often given for direct sunlight. The extra blue in the HMI makes for a higher colour temperature of around 6400K. Again, this sounds bad: we're 800K, or about 15%, out. In fact, the difference between 6500K and 5600K is only about equivalent to a one-eighth CT orange filter (Lee's #223). It's visible (equivalent to about 25 mireds, technically) and a director of photography would want to filter to match things, but the problem is not critical. 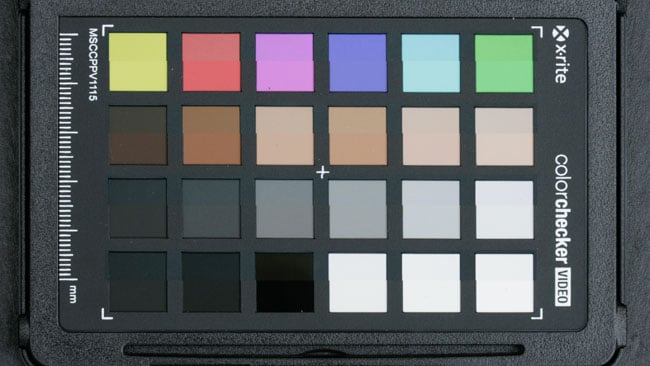 Top half of squares - HMI. Lower half - daylight.

In this image, X-Rite's Video Color Checker chart is divided, with the upper half of the squares showing the colours as rendered by the unfiltered HMI and the lower half under clear midday daylight. The image has been adjusted using tools operating only in brightness to roughly match the luminance of the two shots to make the comparison easier. The fractionally cooler light of the HMI is clearly visible in the upper half of the grey squares in the bottom row. We might expect the somewhat lower saturation in red and things containing red, such as skin tone and pink-orange colours.

Clearly, some of the filmmaking world's most cherished ideas about sorting all lighting into two groups, daylight and tungsten, don't really represent the reality. One of the things a filmmaker needs to do in prep is to establish what filters are required to match the specific lights on hand, taking into account any particular sensitivities the camera may have.

Let's look at another example. In this chart, the lower half of the squares shows the chart under daylight; the uppermost half of the squares is illuminated by a tungsten-halogen lamp, filtered via Lee's #201 full CT blue, which should nominally turn the tungsten into daylight, according to the widely-accepted system we discussed earlier. And the filtered tungsten looks...green? 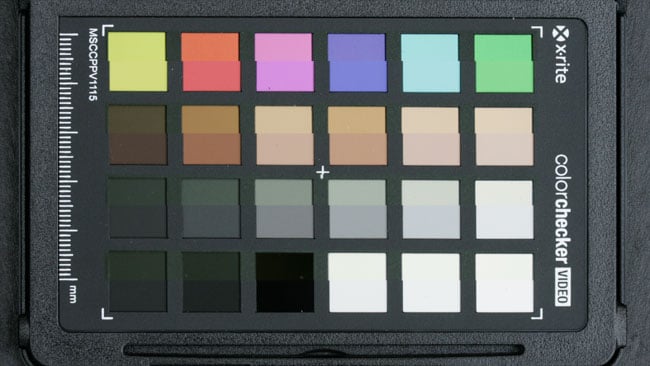 Top half of squares - tungsten with full CT blue filter. Lower half - daylight.

Yes, green. The increased exposure in warmer colours is perhaps understandable, but the greyscale looks green. It could probably be corrected using a magenta filter such as Lee's #279 one-eighth minus green (which is not in the pack we used).

There's no suggestion that there's really anything wrong with anything here, least of all Lee's filters, which are manufactured to a much closer tolerance than, say, daylight, which changes moment to moment, despite being a very complete spectrum. Perhaps what this shows us most of all is that the idea of all the world's lighting being sorted neatly into the two categories of tungsten and daylight is, at best, a rough guide. Cautious camera personnel will carry a variety of grades of correction, particularly the finest one-eighth plus and minus green, colour temperature orange and blue filters, because light sources, even the sun or conventional, simple tungsten lights, are very rarely perfect.

Finally, let's look at a more difficult example of using the system of daylight and tungsten, alongside appropriate correction filters, to achieve a desired result. Here, we have Aputure's COB-120t, which is designed to emit tungsten-balanced light. The image below shows X-Rite's ColorChecker Video chart illuminated by daylight, in the bottom half of the squares, and by the COB-120t in the upper half. For the latter, the camera was set to tungsten-balanced mode, which means that we are, to some extent, also characterising Canon's implementation of tungsten lighting. The LED reads slightly warm, which is reasonable, given that the camera considers tungsten to be 3200K and the LED reads at just under 3000K. 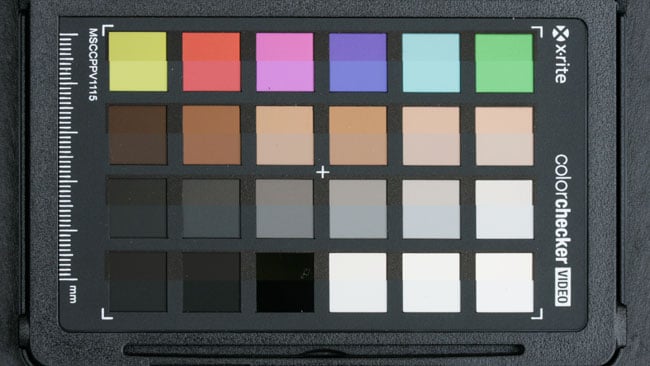 Now, filtering tungsten to daylight is a notoriously lossy process; we end up throwing out a lot of the warmer-coloured light that the device produces. Overlooking that, though, do we end up with a reasonable simulation of daylight? It has long been difficult to filter nominally-tungsten LEDs to daylight, or vice versa, because the slightly odd spectrum of an LED caused havoc with filters which were largely designed for other types of light source. Aputure's light, however, is a particularly good simulation of tungsten, so we might hope it would do well.

While the COB-120t is a little (perhaps 100K) warmer than conventional tungsten, it filters to daylight surprisingly well. The yellow and green chips look a little underexposed and there is extra saturation which probably isn't entirely appropriate. Even so, the greyscale is very close , if perhaps slightly on the magenta side. This is an extremely stern test of a light source that we know full well doesn't create a perfectly continuous spectrum, given that we're using filters which assume it does.

The original intention was to write a piece about how the daylight/tungsten lighting system can break down terribly for LEDs and this will certainly be true for many of them. It's not a good idea to assume they'll all take filtration as well as Aputure's latest, which is why Lee has also produced its Zircon range that's specifically designed to help tame far worse LEDs. The fact that this worked out so well, though, is very much worth reporting. When all LEDs can be straightforwardly controlled using conventional lighting filters like this, without need for special consideration, their day will truly have arrived.