A high CRI tungsten-balanced LED that won't break the bank 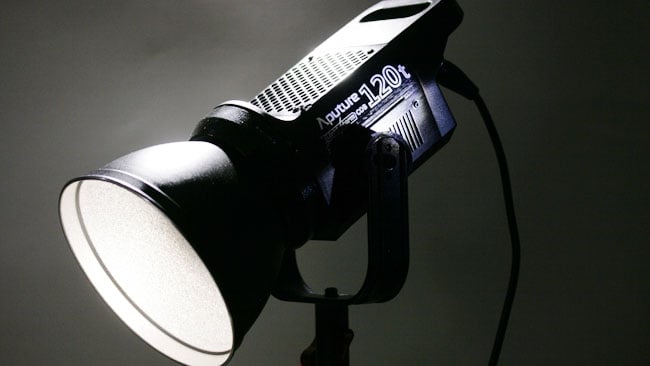 RedShark Review: The Aputure COB-120t, a tungsten-balanced LED with surprising colour quality at a reasonable price.

When Aputure teased its COB-120t light at NAB this year, interest was piqued by the combination of reasonably high power, hard light and price. Aputure lighting instruments aren't traditionally the absolute cheapest in the market, but neither are they as expensive as the very top end. This price bracket more-or-less defines an area where most of the world's camera crews actually operate, so the potential market is large.

The COB in the description refers, presumably, to the chip-on-board LED array. It isn't practical to make a single LED capable of developing the 120 watts of the COB-120t, so we're required to cluster several of them together. This is usually done by mounting the blue LED drivers on an aluminium-cored printed circuit board, for best possible heat transfer, and covering the entire assembly in silicone bearing the yellow-emitting phosphor. This is nicely implemented in Aputure's light. The active area is something like 22mm across, making it a true hard light with no evidence of the multiple drivers visible in the output. They are, barely, visible as a tightly-packed cluster if the module is viewed directly via a suitable safety filter. 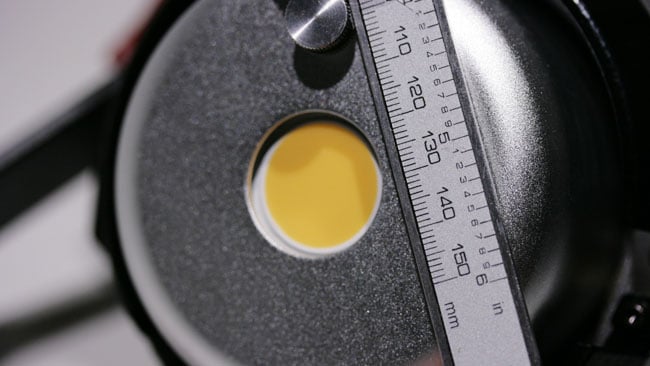 The chip-on-board emitter module is about 22mm across, allowing the light to cast sharp shadows.

At one metre and with the supplied Bowens-mounting reflector (of which more below), the unit outputs a peak of around 3640 lux into a beam perhaps 90 degrees wide. Some sources have claimed that the COB-120t is equivalent to 1500W tungsten, which is dubious given the rule of thumb that an LED is perhaps four or, at best, five times more efficient than tungsten. Nonetheless, it's certainly reasonably bright for a tungsten-balanced LED, which is generally less powerful, due to the need to convert more of the LED's blue light to red to reduce the colour temperature.

This concentration of power inevitably requires forced-air cooling and with this comes fan noise. It's quite straightforward to fit fans that make very little noise, which is what Aputure has done. Long term, it's a matter of maintenance. Maintaining low fan noise levels after a few thousand hours might require replacement of the fan, but that's probably not an outrageously expensive operation and, as supplied, the light seems quiet enough. It's difficult to be specific on this point because the level of acceptable noise is so situationally dependent, but it's certainly among the better ones, even when manually set to full-fan-power mode. The back end of the light is perforated to promote airflow, with the heatsink clearly visible inside. This is an indoor toy and there is no attempt to ward off rain. 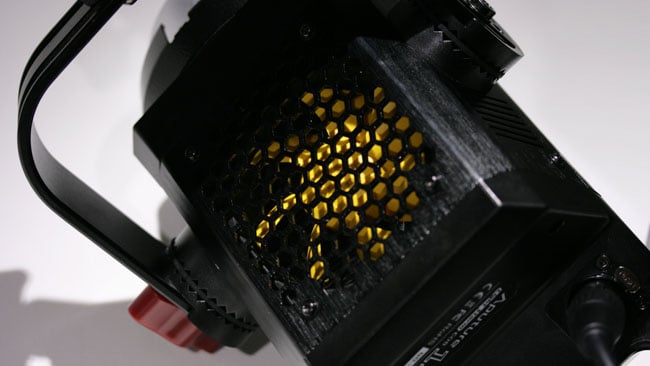 Fan cooling is essential when this much power is packed into such a small emitter,
but noise levels are well-controlled.

Power is supplied by the included 200-watt, 15-volt DC power supply. This connects, via three-pin XLR, to the control unit. It's not dissimilar to what's supplied with the company's LS1c LED panel, although, naturally, lacking the colour temperature control. This does create a multiple-hop cabling situation, where the control unit then connects to the COB-120t's four-pin XLR input, but it's a flexible approach and one that also permits battery power via the mounting plate on the back of the control unit. The device remembers brightness and radio channel settings across power outages, but doesn't come back on unless the power button is pressed. 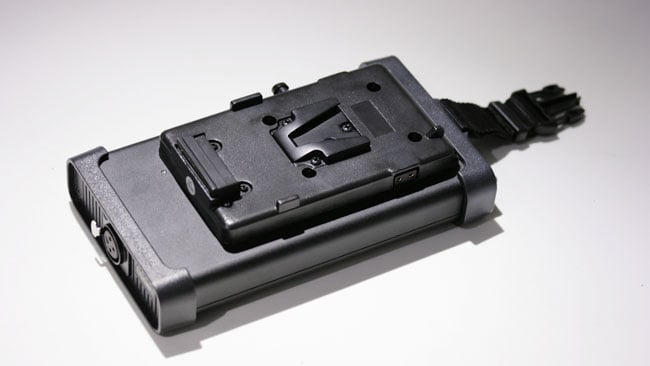 Batteries can be mounted directly on the back of the control unit,
although 120W is a lot of power for a camera battery.

At full power, this light would draw down most camera batteries in less than half an hour. Nonetheless, the option to run a light such as this from either onboard batteries or a more capable battery box on the ground is extremely welcome, if only because it permits very quick setup and can be immediately available while mains power is rigged. Dimming is reasonably linear, although there are noticeable steps in the light output which would prevent on-camera fades without visible chatter and the minimum brightness is 10%. Dimming can be controlled remotely with the radio remote, which can select from four devices per channel across three channels, totalling twelve individually-controllable lights. 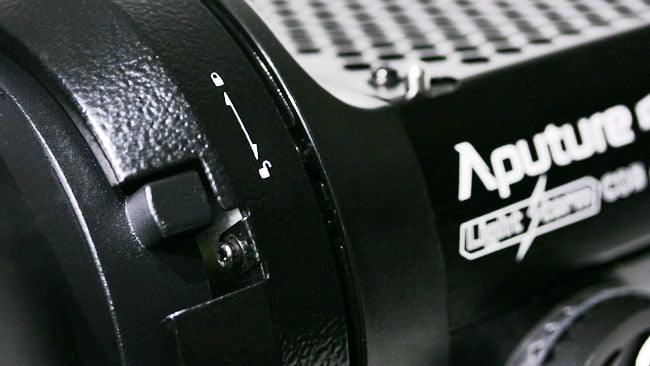 The Bowens S mount is mainly found in equipment used by stills photographers,
but is more-or-less the only standard that exists.

As supplied, the COB-120t includes a diffused reflector for its Bowens S mount, which makes it an open-faced light in similar vein to a redhead (though a bit less powerful than the 800W tungsten usually used in those). This approach to light modification stems principally from the still photography industry, but there's really no other standard for lighting accessories and the application is well chosen here. As such, a huge variety of other options are available. Aputure currently offers a softbox and umbrella.

So far, so good: the LS-120C is a well-put-together thing. The grips on the supplied pan-and-tilt knobs are plastic, although they'd be easily replaceable. The back end of the case is also plastic, as is the control unit, though both seem reasonably well-built and perhaps the most fragile component is the wireless remote control antenna. Latching connectors are used throughout, with a four-pin XLR input on the back of the light, three-pin on the controller and a Lemo-style output connector on the control unit. 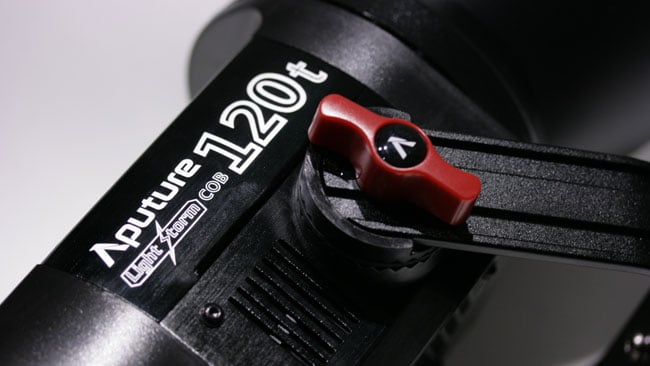 The yoke can't be swung around to allow the light to be underslung, but is otherwise conventional.

The litmus test for LEDs, however, is their colour quality. This is easier for tungsten-balanced devices, for which a larger amount of output is derived from the broad emission of the yellow phosphor, as opposed to the spiky emission of the blue LED. It's also easier for remote-phosphor LEDs, which the COB-120t is not. It's also easier for lower-power-density devices, which it is also not, packing 120 watts into that small emitter. Good colour quality also tends to be a purview of the very expensive and the COB-120t isn't that either. 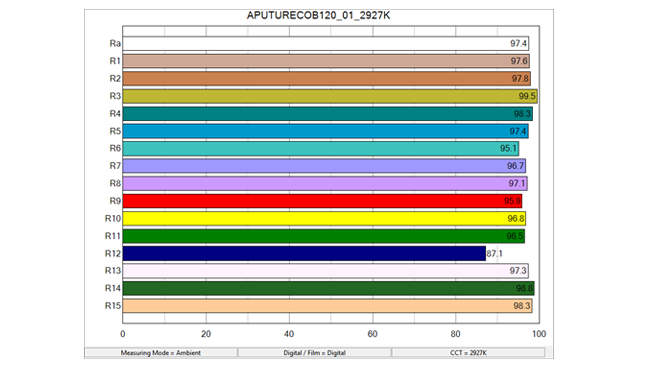 The pleasant surprise, then, is that the colour quality of this light is very good, possibly the best LED we've ever seen. Measured with Sekonic's C700-R meter, the manufacturer's claims of 97 CRI are readily substantiated, with the 97 TLCI claim entirely believable, too. Particularly, results are good on the crucial R9 and R12 colour chips, scoring 96 and 88 respectively. 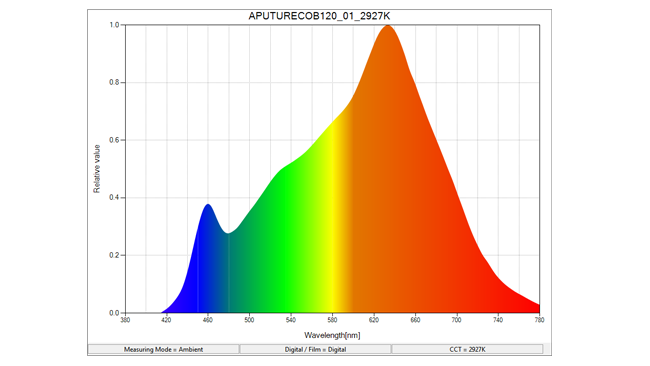 These are excluded from the eight rather pastel colours, which are averaged (hence Ra) to generate the headline CRI figure. R9 is a deep red, an essential for good skintone reproduction, and R12 is a very deep blue, which many otherwise good LEDs can't illuminate at all because the physics of phosphorescence means that they can't produce a deeper blue than the blue of the LED itself. Variation of colour quality and colour temperature with dimming is absolutely minimal and the CCT is never more than 115K from the advertised 3000K output.

Lifespan is a concern we can't really test in a few days; if the LEDs are kept adequately cool, they last a long time. Whether the daylight and mixed-colour versions can maintain this performance remains to be seen. They probably won't be quite as good because of sheer physics, but for the sake of this light, the numbers speak for themselves. Some people won't like the fact that it looks like a still photo flash head, which is clearly a side effect of its having been designed with that market in mind, but at the price, there can be no serious argument with Aputure's latest.