Why film still exerts such a hold over us 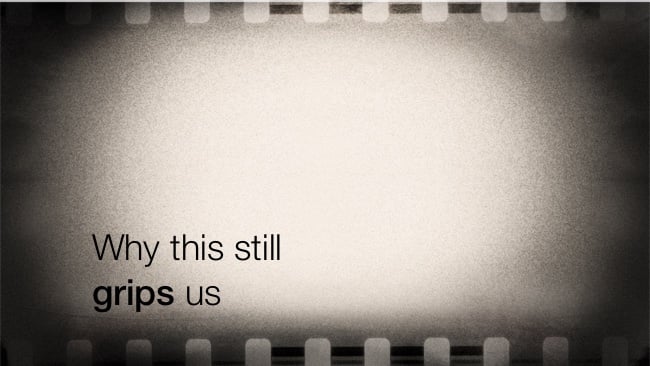 The Persistence of Memory: Roland Denning on the allure of a format that still has a hold over many of us even, sometimes, against all logic and reason.

Just over a year ago I wrote about why we still want to emulate film. Since then digital video has got better and better, film increasingly expensive and impractical. With the announcement of 8K Super35mm sensors is hard to argue that digital can not surpass film in every measurable way – resolution, latitude, dynamic range, sensitivity, colour science, flexibility, cost. And yet some still want to make that argument – perhaps because of fondness for equipment or ways of working, perhaps out of nostalgia, or perhaps there is still some indefinable quality to film that video lacks.

That desire to produce the ‘film look’, to get ‘cinematic’ results lingers on. Why? And what does it mean? The answer is complex; some of it is nostalgia and some of it is myth. Some of the appeal is due to film’s actual technical advantages, but a lot is down to elements that have nothing to do with fidelity or technical superiority.

Video was always seen as poor cousin to film because, for a long time, video cameras, particularly portable video cameras, just weren’t very good. Video couldn’t compete with the dynamic range of film — highlights would burn out, shadow detail would be lost and the apparent crispness of the image was dependent on sharpening circuits that effectively drew lines round objects to separate them. Turn down the sharpening on a broadcast standard BetaCam and you’d see just how soft the image really was. Film, in comparison, showed more detail in a subtler, more natural way.

Over the years, video got better and better, but it was only with large sensor digital cameras that it could really compete with and exceed the qualities of film. Large sensors also gave video cameras the shallow depth of field previously associated with cinema. Surprisingly, it wasn’t until the 21st century that it dawned on the video world that shallow depth of field was one of the key elements of the movie ‘look’.

Much of the appeal of film is due its associations; formative experiences watching great movies in cinemas or actually working with the stuff itself. We can’t undo these emotional connotations, and they are as real as any more quantifiable elements. But let’s not forget that many of the characteristics of film are actually its imperfections.

The ‘film effect’ filter built into programmes on your home computer creates a sort of parody of film: it is grain, jitter and scratches that are emulated. A clear case of the appeal of film’s imperfections was Super 8mm’s once fashionable use in rock promos because of its granular qualities. The late-lamented Kodachrome had a wonderful, larger-than-life saturation, a fantasy evocation of world of blue blue skies and golden beaches. Here was a ‘look’, evocative and not totally predictable, intrinsic to a particular technology. And why did we like it? Partly nostalgia, of course, but also, perhaps, because we like imperfect images because they allow the imagination to intervene.

There’s a parallel legacy of the analogue age in the audio world: the guitar amp. All upmarket guitar amplifiers now are valve driven, only the cheap mass produced amplifiers are solid state (often equipped with digital emulation that allows you to switch from a ‘Fender’ to a ‘Marshall’). This is not because valves are better at reproducing sound, it is because their distortion, particularly when overdriven, adds complex harmonics to the relatively characterless output of an electric guitar. Of course you can fake the look of Super 8 with digital techniques just as you can fake a valve sound very effectively with digital modelling, but those who can afford it want to go for the real thing, even if what you get is a much more limited range of effects – or perhaps because the range of effects is limited. This is applicable to the high-end of film production too: if you are experienced in working with film, you know what you are going to get; ‘the look’ is ‘baked-in’ to the tools your are using.

And here, I think, is a key point about the revival of interest in ‘outmoded’ analogue systems: artists need both limitations and random elements. Some of the most creative moments happen when you are struggling against what the equipment you are using will actually do, when you are pushing it to the limits. It is not all about control, you may value a medium that brings with it its own particular qualities rather than having an ability to emulate anything (I will resist an anecdote here about having a relationship with an actress). When you turn up the gain on an amp or overexpose or underexpose a film stock, something quite wonderful and not wholly predictable might happen.

Going with the grain

Grain is another much-discussed quality intrinsic to film. It is notoriously hard to imitate accurately because of its random variation from frame to frame. In digital terms, it’s a lot more data to encode if you are going to record those frames accurately. I remember a paper many years ago – and I believe it came from Kodak - that claimed film, unlike analogue video, was really a digital system, as an individual grain in the emulsion was either ‘on’ or ‘off’ (exposed or not exposed). Not a very compelling argument as we don’t manipulate the image at the granular level, but interesting nevertheless. Although grain is now something to be dialled in with a film emulation plug-in, in the heyday of film it was always regarded as a flaw that should be minimised, never a feature.

Another factor that is a key part of the ‘film look’ is framerate - again, something that has been much discussed. Many retain a preference for the just perceptible flicker of 24 frames per second (or 25 if you are talking about European TV) against the continuous flow of 60 or 50fps. Some believe this is merely due to historical connotations: 24 looks classier because it is associated with cinema, 60 looks like live TV and soap opera and thus looks cheaper. Some describe this as video looking like the present whereas film looks like the past. Others theorise that the 24fps flicker has a slight hypnotic effect, maybe like Bryon Gysin’s Dream Machine, interacting with the brain’s alpha waves and inducing a dream-like hypnagogic state. A similar effect can be experienced driving down the tree-lined roads of France as the sun shines through the trees; I believe there are strict laws in France about the intervals at which trees are planted to avoid drivers falling asleep.

Whether or not 24fps actually induces a dream state, it is often aspects of dream that we want to evoke. The first demonstrations of high-definition video looked universally awful because they were demonstrating how bright and clear and sharp it could be. In cinematic terms, it looked banal. That might be okay for light entertainment, but we don’t want movies to looks like that. This was something the technology-driven Japanese manufacturers never seemed to quite get, and perhaps helped to extend the dominance of film for a year or too. Movies demand an element of mystery and magic - shallow depth of field is part of that equation, but we might not want anything in the picture to be too crisp.

When a new generation of high-speed Zeiss lenses became available, a whole generation of Hollywood cinematographers declared them ‘too sharp’; using some sort of diffusion filter to soften the image was standard practice. With digital cameras too there has been a huge interest in old cinema lenses that have a softer look, or uncoated lenses that allow highlights to flare.

The good, the bad, and the ugly

For those who grew up working with film there are a lot of reasons to love the stuff: the discipline and concentration of a film crew, acutely aware of how precious raw stock is, the quality of equipment that has evolved over decades, a certain mystique to the whole process (has anyone who’s worked on film ever thrown away a clapperboard?). But, in terms of image quality, the difference between a camera like an Alexa and 35mm is now marginal. And, if, inevitably, it is going to be viewed on a digital screen, academic. More to the point, the whole infrastructure around film is in terminal decline; it’s years since any manufacturers actually made a movie camera and film labs are rapidly disappearing. Soon there won’t be a choice, whatever the budget.

What is often overlooked, particularly by younger filmmakers who have never actually used film, are the downsides. I am old enough to have started my shooting career on film and I am well familiar with the less pleasing aspects: shooting 16mm reversal with half a stop latitude, the horrible graininess of fast 16mm stock, changing mags every 10 minutes, labs ruining your negative, camera assistants loading film the wrong way round, magazines fogged by customs or sheer carelessness, hairs in the gate, scratches, having to lug boxes of 400’ rolls across continents, never being quite sure what images you’ve got until the rushes are projected… If I have nostalgia, it is for design of the camera and the discipline it brought to shooting, not to the medium itself.

There is probably nothing that can match a pristine, first generation, film originated, 35mm print screened with a high quality projector, but that situation is extremely rare. Most moving images are now viewed on digital screens and the subtle advantages of the film origination are lost on the way. Can anyone seriously claim that the movies shot today on film look better than those shot digitally? Moreover, can anyone, apart from industry insiders, actually tell? Digital projection is still often inferior to good film projection (and maybe the dream-like film flicker is an element here too) but, certainly in the UK, the standards of film projection have generally been low. Scratched and worn prints, shutters out of alignment, erratic focus, poor illumination were all common. I’d go as far as to say the move to digital has actually improved the experience of the average cinema goer.

Let’s not undervalue the tremendous advantages that digital technology has brought us. That domestic video cameras, even mobile phones, can produce images that are better in some ways than the broadcast technology of only a few years ago. That almost everyone can have their own recording studio, darkroom and editing suite in their bedroom. That costs of recording materials in negligible. These are huge liberations and should be celebrated. Nor is there anything intrinsically wrong in using digital systems to emulate analogue processes.

Digital systems allow us to reproduce images and sounds without degradation and at negligible cost. How to best create images and sounds in the first place is something that can’t be measured in pixels. Analogue systems are not intrinsically better than digital ones, but they are tied up in the complex history of what sounds and images mean to us. If we can afford them, analogue devices might still be the best tools to work with to deliver what we want to say. Mostly we will use technologies of the present with elements of the past, like an old piece of glass in front of a very modern sensor, to create spaces where our imaginations can run free.