What Drone? A brief guide to the current ready-to-fly drone market 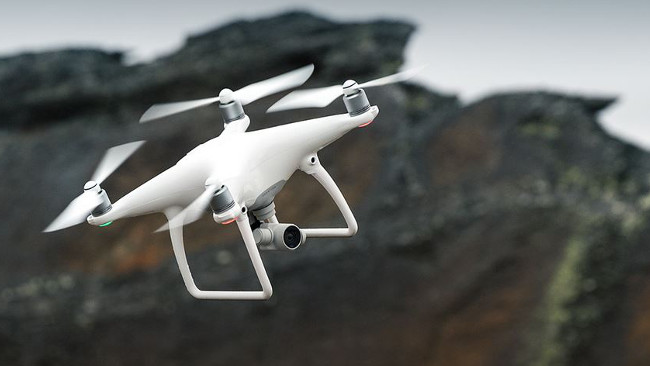 There have never been so many ready-to-fly drones on the market, yet picking the right one to fit your needs can still be difficult. Simon Wyndham puts some popular RTF options in context, highlighting key features and use cases.

The ready-to-fly (RTF) drone market can be a confusing one. I have covered the processes for obtaining permissions for commercial work elsewhere on RedShark. But whether you are a hobbyist filmmaker or a professional, where do you begin when choosing the right RTF drone? Amazingly, the market doesn't begin and end with DJI! This is not a review of each system, nor a comprehensive feature rundown, but a basic overview of the major players and options.

The Phantom is the base DJI model. Confusingly it now comes in five variations, some differing only in minor ways.

The Phantom 3 comes in Standard, Advanced, 4K, and Professional variations. The Standard (£449) is the budget model. It still features safety systems such as to return to home and GPS position holding. However it lacks GLONASS, so its positioning isn’t as accurate as the other models. It uses short distance wifi to broadcast its video feed back to the pilot. There is also a 2.7K camera on board.

Beyond the Standard model, things become more clouded. If you need 4K and are on a budget, the base 4K model (£699) is effectively the Standard, with a 4K camera and a Vision Positioning System. VPS helps to maintain position and altitude while flying indoors in favourable conditions. The 4K also uses wifi to broadcast the live video feed back to the transmitter.

Finally, there is the Phantom 4 (£1229), the top of the Phantom range, and giving the Inspire 1 a run for its money in some respects. A 4K camera is standard and it is equipped with dual IMU systems for safety redundancy, VPS, and sonar based obstacle avoidance. The Phantom 4 also offers much more speed and responsive power than previous Phantom models, and an improved battery system.

On first release, the Inspire 1 was a revelation. A professional level system that was accessible to everyone. The Inspire is a true workhorse, and it has often replaced much larger and expensive aircraft in day to day operations. It now comes in a few different flavours. Most Inspire parts are interchangeable across versions, and the camera is upgradeable.

The base system is the Inspire 1 (£2519) with the Zenmuse X3 camera. 360 camera control, 4K video, and Lightbridge are all advantages. The X3 is very similar to the one on the Phantom 4, and takes good video and stills. The footage is highly compressed, but it is still very usable in good light. Firmware updates have increased the bitrate in certain modes, vastly improving some 60hz modes. Although oddly, not in 50hz modes!

Next are the Pro (£3699) and Raw (£5189) models. The basic Inspire system can easily be upgraded to the Pro/Raw specification. The main difference is the camera. The Pro has the X5, while the Raw has the X5R. Both cameras are MFT, hosting a variety of lenses. The X5 takes much better stills than the preceding X3, but it is still restricted by relatively low bitrates for video.

Conversely, the X5R can record DNG Raw video to an on-board SSD. Suffice to say that it is capable of some very high quality footage indeed.

The tradeoff with mounting the X5 cameras onto the Inspire platform is much reduced flight time and speed due to increased weight and power consumption. However, the interchangeable lens option on such a platform may be too much to resist. Although some may question the wisdom of flying an expensive camera setup on a quad rotor rig.

All DJI models require a smartphone or tablet (iOS or Android) for telemetry and live feeds.

Unlike DJI, Yuneec integrate the ground station and live feed screen into the transmitter. There also innovative features for safety, such as being able to isolate a safe area around the pilot for take off and landing. In addition, a Steadygrip system is included in the package, mounting the camera onto a handheld rig, similar to DJIs Osmo. Yuneec do not have GLONASS, however.

At the top is the Typhoon H, with the reassurance of a six rotor setup for redundancy and stabilty. There are two versions, the H (£1199) and the forthcoming H-Pro (£1699). Both use the same chassis, which includes retractable landing gear, and a foldable rotor system for portability.

The main difference is that the H-Pro system has the Intel Realsense obstacle avoidance system, which maps out an area, intelligently deciding on routes to take in intelligent flight modes. It even logs the GPS location of obstacles for future avoidance. Yuneec claim that the system can detect objects down to the smallest tree branch. Realsense will be available to the base H model as a modular extra.

The Yuneec drones are very well featured and are certainly worth a look as an alternative to DJI.

The 3DR Solo (£789) was the first serious alternative to DJI until Yuneec upped their game. The Solo uses a GoPro camera, purchased separately. The base Solo system does not come with a gimbal either, so you will need to buy a package which includes this (£978). You will also need a smartphone or tablet for the video downlink/ground station.

At the time of its release its follow me and intelligent flight path modes were a step up from competing systems. It was first drone to allow a live video feed from a GoPro. Many of these capabilities have been equalled the Yuneec and DJI systems with their new object avoidance systems.

However, there is a lot of processing power available on the Solo, with its dual processors, as well as add ons, either planned or already available. For instance, the Ribcage, a modified GoPro Hero 4 with swappable lenses, a planned LiDAR system to allow accurate indoor flight, and upgradeable motors.

The benefit of using a Hero 4 camera is that higher bitrate ProTune modes can be used, giving higher quality recordings than its competitors.

As I mentioned, this is not a comprehensive rundown of every feature and nuance. The key thing to consider when deciding on a system is your intended primary use. A 360-degree rotating camera might sound great, but can you achieve your objectives with the the Phantom or Solo? Do you need separate camera control with a secondary transmitter? Are intelligent flight modes important to you and are they legal to use in your country?

Finally, don't be taken in by the hype. See if you can get a demonstration of the system of interest in action.