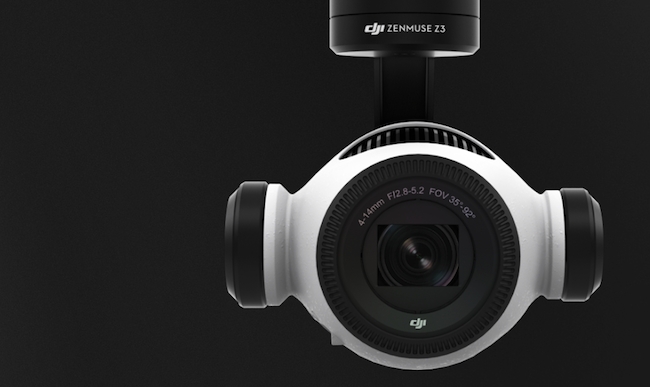 The new $1000 Zenmuse Z3 camera takes the same CMOS chip as the company’s X3 camera and adds in an optical zoom capability.

One of the best things about the DJI Inspire 1 is its modular camera. The options are now truly versatile, with the original X3 at the base level, the M43 based X5 with interchangeable lenses at the mid range, and the X5R at the top. There is also a FLIR camera available too. All of which can be used across DJI’s range on the the Inspire 1, Matrice 100 and 600 respectively.

The one niggle remaining for Inspire owners on a budget is that until now they could not zoom unless they forked out for the X5, which comes at the cost of finances, flight times and speed of the aircraft.

The Inspire 1 is a workhorse drone that has taken over many duties previously filled by larger, more expensive systems. The addition of a budget zoom lens, means that even at base level, the Inspire will be more useful than ever for industrial applications such as wind farm inspections. Such applications often require a zoom lens to allow inspection of turbine blades. Something that has limited the Inspire until now unless it is flying the more expensive X5.

DJI has now addressed this with the release of the new Zenmuse Z3 camera, which takes the same CMOS chip as the X3, but adds in an optical zoom capability. Optically it has a range of 22 - 77mm, with a aperture that goes from f/2.8 to 5.2 at the telephoto end. This isn’t too bad for a budget camera this small and light. And don't forget that most of the time such cameras are being used in good light.

DJI has also integrated a digital “lossless” zoom function. Quite how well this performs remains to be seen. However, they claim that the camera has been optimised for stills photography, being capable of tag 12mp pictures in DNG raw format, although it can still record video up to 4K resolution at 30fps.

The specifications suggests that video quality can be selected between superfine, fine, and normal. It will be interesting to discover precisely what this means. Could it be that DJI has changed the processing to allow for higher bitrates than the existing X3, which is limited by hardware to a maximum of 60Mbps? Watch this space.

The gimbal itself has also been improved. The addition of a zoom means that any aircraft movement or imperfection in the stabilisation will be magnified. To address this DJI have added some fine tuning to the yaw control systems.

DJI continues to impress me with its long term thinking, and the adaptability of their current systems. One can only wonder where they will take things next!

DJI Introduces First Integrated Aerial Zoom Camera
Zenmuse Z3 expands possibilities for industrial, professional usage
SHENZHEN, July 14, 2016 - DJI, the world’s leading aerial-imaging company, on Thursday announced the Zenmuse Z3, DJI’s first integrated aerial zoom camera optimized for still photography.
The Zenmuse Z3 will offer up to a 7x zoom. The camera incorporates DJI’s leading gimbal technology, which has been upgraded to work optimally with its zoom capabilities.
“The Zenmuse Z3 pushes the possibilities of use for industrial applications,” said Senior Product Manager Paul Pan. “Before this camera, the only way to zoom in on a subject or object was to fly closer to it. Now, pilots in a search-and-rescue situation, or conducting surveys or inspections, can maintain distance and still zoom in for sharp, detailed images.”
The zoom camera is aimed at providing new capabilities for industrial applications, such as inspection and surveying.
The Zenmuse Z3 is compatible with the Inspire 1, Matrice 100 and Matrice 600 drones and uses the company’s dedicated HD video downlink, Lightbridge and Lightbridge 2, providing up to 3.1 miles (5.0 kilometers) of HD transmission range.
The Zenmuse Z3 is fully integrated into the DJI GO app and provides a seamless user experience, including a live feed from the camera and the ability to change camera settings, swipe to zoom in and out, capture photos or video and to activate intelligent flight modes. Users may also choose to employ camera controls, such as capturing photos and video and zoom, through their drone’s remote controller.
The Zenmuse Z3 weighs 262-gram and achieves up to a 7x zoom via a 3.5x optical zoom, combined with a 2x digital zoom. This gives the Zenmuse Z3 an effective zoom range of 22 millimeters to 77 millimeters. It has a maximum aperture of F2.8 and F5.2 at 22 millimeters and 77 millimeters, respectively.
When the camera zooms in, the smallest movements are magnified. Adding an additional layer of fine-tuning to the yaw control of the Z3 is a custom-designed reaction wheel. This works in tandem with the normal yaw motor to allow for more refined and controlled movement and greater stability.
The Zenmuse Z3 features the same highly refined Sony 1/2.3-inch sensor that is found on the Inspire 1 and the Phantom 4, leading the class in image quality. It can shoot still images at 12 megapixels with additional Adobe DNG Raw Support for maximum editing options in post- production. The camera also shoots video at up to 30 FPS in 4k resolution.