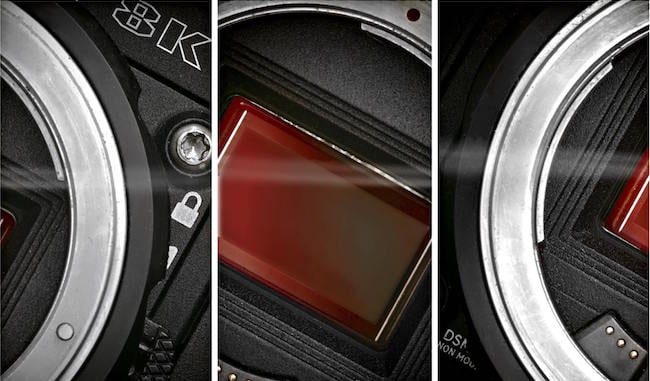 RED's startling new Helium sensor hasn't just been announced with some far off ship date, it looks like it's here already. Renowned RED expert and RedShark contributor Nick Morrison runs through the detail of what we know, some of the genuinely stunning implications, and where this takes us next.

First off, a quick disclaimer: This is exciting news from RED but very little specific information is available. Please treat any mention of future products from RED as pure speculation, and understand that any and all of this information is subject to change.

This week, in a startling revelation on Facebook in the wee hours of Tuesday, July 5th, RED President Jarred Land teased for the first time pictures of a RED Weapon outfitted with "Helium", their brand new 8K Super 35 sensor.

It was the filmmaking equivalent of a microphone drop. In one simple online post, RED had just declared to the world, and to the cinema community, that they now had two 8K Sensors: one a VistaVision sized Dragon Sensor (that is the heart of the new Panavision DXL camera), and the other this top secret Super 35 Helium 8K sensor (that later posts on Facebook revealed was powering a custom Weapon camera for director Michael Bay - deliciously nicknamed "Bayhem"). 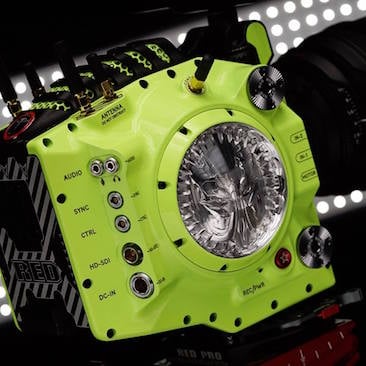 Two sensors. Both delivering 8K. But in two completely different sizes - one VistaVision, and another Super 35.

Though RED has released few "official" details about Helium, it seems safe to assume this sensor isn't only a resolution upgrade over Dragon, but may also deliver a performance upgrade as well (sticking to RED's unofficial mantra of "not just more pixels, but better pixels").

In the closest thing to an official statement, RED President Jarred Land posted the following on Reduser.net shortly after midnight on Saturday, July 9th:

"As many of you might have noticed our new Helium 3.65 micron pixel is complete and ahead of schedule... WAY ahead of schedule.   Helium's first sensor is the 8K s35 build on a completely new sensor line and will be available to Weapon customers in the coming months. (Or the coming weeks for those that know where to look).

(Note: many fans of RED will be happy to see Jarred's official mention of a new camera too, "Epic-W", long rumoured, but until now never official! Now we know why...it's Helium powered.)

Also notice the mention that Helium sensors will be shipping in the coming months - and for those “that know where to look”, in the coming weeks. This is almost the most startling detail of all. Helium isn’t a promise of what’s to come down the road.

The advantages of Helium – and the early specs

Here’s what we know as of now about Helium, as new details trickle in seemingly every day. The sensor is powered by 3.65 micron pixels (vs Dragon's 5 microns), and is to all intents and purposes the same size as the Dragon 6K. Phil Holland, arguably the world’s greatest outside expert on all things RED, recently published this handy chart to help visualize Helium’s size and potential: 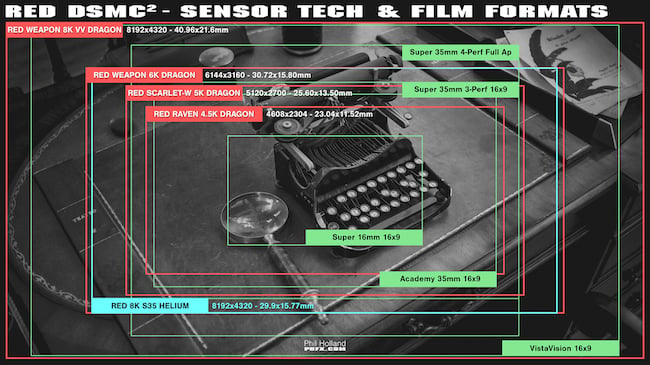 As you can see, the new 8K Helium sensor is only moderately smaller than a 6K Dragon sensor – though interestingly it is more in line with other S35+ sensors on the market, such as Arri Alexa’s Open Gate which is 28.7 x 18.13mm.

In an exclusive interview with Red Shark News, Phil Holland had the following to say about what Helium means to the filmmaking community:

“Things are moving quickly in the motion picture industry, especially in these times where 4K/4K+ capture and 4K delivery is becoming more common on a daily basis both in theaters and in the home.

"For me the RED Dragon and Helium sensor technologies are about giving filmmakers choices. RED's come through with their promise in creating a digital film alternative. Part of that is having the spatial resolution relevance to meet or exceed the resolving power potential of motion picture film. The other important creative aspect is having the flexibility to explore multiple motion picture format sizes.

"RED now is making 8K options for Super 35mm and VistaVision formats, which has very real benefits to image quality and workflow possibilities.

"Scanning motion picture film in at higher resolutions provides certain advantages and this carries over nicely into the RED realm. Productions have been shooting at 5K, 6K, and recently 8K to finish out at 2K, 4K, and shortly 8K. I've recently moved into the world of larger format 8K capture with the RED Weapon 8K VV and I've put together a nice set of glass for this larger format size. The images I've created with this camera are more impressive than 65mm 5-perf scans.

"With the addition of Helium 8K S35 my Super 35mm glass investment remains solid and will give filmmakers, especially for those who have an actual background in shooting film, something familiar, yet also state of the art.”

As Phil points out, the immediate advantage of the Helium sensor is clear - filmmakers will now be able to shoot 8K (or close to), and take advantage of over a century's worth of Super 35 glass. Phil expanded on this later that night on Reduser, when comparing Helium to Super 35mm 4-perf:

And yes, damn near every Super 35mm motion picture lens will cover that and/or 8K HD (32.2mm image circle).”

And that really is the clincher. Filmmakers can now use their beloved Super 35 glass and shoot 8K and 7K on Helium and be worry free about coverage. No more Hasselblad lenses needed (à la Alexa 65 at 6K). No more VistaVision glass (à la Weapon VV and Panavision DXL at 8K). Just good old fashioned Super 35 glass delivering 8K imagery on a state of the art sensor. Maximum resolution cinematography…just got democratized...and just saw its doors blown off for lens choices.

As is the norm with RED, we have to imagine there’s more up their sleeve with Helium. There usually is! The first burning question is of course – will they make smaller cuts of the Helium sensor? On the Dragon platform, they’re already selling 5K Dragon cuts to power the Scarlet-W, and 4.5K cuts to drive the Raven. So what if that logic applies to Helium?

Also a 4K cut of Helium would be 14.95 x 7.86mm, only a hair larger than Super 16 (12.52mm by 7.41). With the recent demise of Digital Bolex still fresh on the industry’s mind, will RED breathe new life into this classic format and release a Raven-Helium? A Super 16 powered 4K budget camera?

Only time will tell.

Helium – more high speed? How about the DR?

The second burning question about Helium is will it deliver more high speed than Dragon? It’s common knowledge the Dragon sensor was limited to 300fps at 2K. Customers have been pleading with RED for years to push beyond that (500fps is a magic number), but so far they’ve been unable to…simply because of the limitations of the Dragon design. But with the release of Helium, has this limitation been overcome? Simply put, at 4K, 3K or 2K – will Helium be able to hit 500fps?

As they say, the devil is in the details...and it will be exciting to discover if Helium can indeed transform RED into a more robust high speed platform.

There’s also no word on Helium's improvements in DR or sensitivity, but RED's clear excitement about Helium and rush to bring it to market...suggests the sensor may have exceeded their expectations. Rumors from those familiar with the program have amplified this impression. With any luck the wait for specs won’t be too long, as Phil Holland hopes to test the Helium sensor very soon.

Helium caps off what has already been a remarkable year for RED. With two distinct 8K sensors poised to hit the market, RED seems committed not just to innovation, but also to 8K as a new cinematography standard (no surprise from the company that in 2006 promised 4K would become a global norm).

Helium also represents a remarkable shift in RED's philosophy. Only three years ago, RED projected a corporate image that was more secretive, and reserved. Today, it has morphed into one of the more open source and imaginative camera companies in the world. Early images of the "Bayhem" camera reflect this new attitude. On Facebook, President Jarred Land teased some of the third party hardware that has been built into this custom 8K camera, "...integrated RT Motion, England, Foolcolor Foolcontrol, Wireless Video and some other surprises :)"

To decode what Jarred is saying, folded into the body of the Helium powered "Bayhem" are hardware from RT Motion, an English wireless video company. And the camera itself can be controlled via Fool Control, an incredibly easy to use iOS software designed by French filmmaker Mikael Lubtchansky. The globalization and collaborative nature of RED has never been more on display.

And by no means has RED’s collaborative spirit been limited to this new 8K "Bayhem" camera or the Panavision DXL. On May 5th, RED also revealed they’d built David Fincher a fleet of custom "Xenomorphs", a unique Weapon/Dragon powered camera system built to the director's legendarily exacting standards. 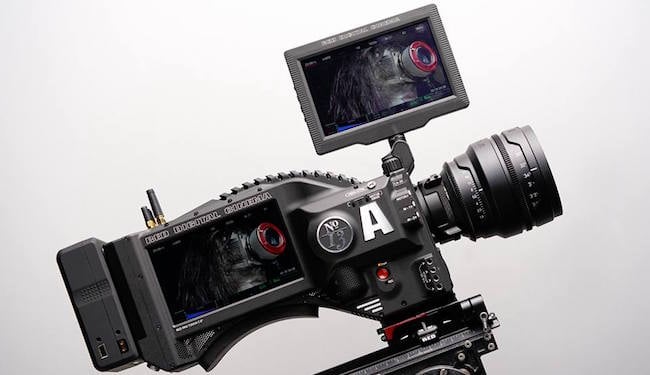 Indeed, making custom cameras seems to be the new normal for RED, as their pursuit of perfection leads them to create and build astonishingly intricate cameras for their demanding A-List customers. One can only assume Steven Soderbergh, James Cameron, Peter Jackson, and Ridley Scott...can’t be too far behind!

In an anecdote made for Hollywood, by far the most entertaining revelation about the Helium sensor may be that Jarred had actually teased about it months ago, on April 13th, posting the pic of the white camera above saying "These aren't the droids we're looking for." At the time, no one understood he was talking about Helium, everyone thought he was simply showcasing his custom white paint job. But on closer inspection, the clues were there - it was clearly an 8K camera outfitted with a Super 35 Red Pro Prime.

Even more entertaining, Jarred was frequently seen walking around NAB with this same white camera, and again...no one appears to have noticed it was an 8K Helium Weapon in plain sight!

And yet this should come as no surprise. From the company that has now embraced collaboration and openness, walking around NAB with one of filmmaking's most heavily guarded secrets - for all the world to see - is really not so shocking after all. In fact, it makes sense: RED is clearly proud of what they're doing, proud to let the world know about it, and proud to work with anyone who will make their cameras and filmmaking better.

Nick Morrison is a director and filmmaker, and also the founder of Small Giant, a creative production company in Brooklyn, NY.