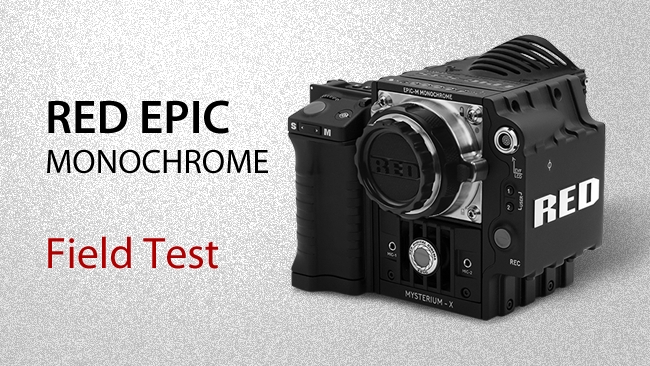 Following up his "first impressions" article, Phil Rhodes reports on his actual use of this most unusual of cameras

The last time I was specifically asked to shoot something in black and white, it was on DVCAM. I am, as you can probably imagine, a little rusty.

First, the artistic considerations. Subjects that look good in black and white are generally those with quite a bit of built-in contrast, or at least those which can be lit to create contrast or layering. In southeastern England, in December, where the sky is grey, the trees are brown and everything else is a somewhere in-between, that’s not particularly easy, especially when the sun doesn’t shine much.

Therefore, I waited for a blue skied sunny morning before taking the Epic out into a deliberately unforgiving available-light scenario with the very low sun of a British winter glancing off the water. Nobody expects any camera to hold every bit of detail in a water reflection and simultaneously photograph the shadow side of the trees, but I think the Epic did pretty well. Theoretically, the increased sensitivity offered by a sensor lacking a bayer colour matrix should offer lower noise and therefore greater usable dynamic range, probably a stop or so depending on the colour of the light. Given the massive oversampling inherent to a monochrome 5,000 pixel wide sensor scaled down to HD as I edited it, I wasn’t surprised to note that noise is well controlled, certainly manageable enough to shoot 240 2K frames per second in stark, midwinter sunlight and catch plenty of shadow detail. In these extremely high contrast situations, the 17-50 zoom produces a small-radius and reasonably controlled glow, as well as neat little stars on small highlights, in this situation. There is a not-unattractive edge flare as bright light sources enter or leave the lens’s field of view.

Filtration is something I’d have liked to test more. Polarisation, grads (less essential to hold skies on modern cameras, but still useful) and diffusion all work as normal, of course, although the blue sky might have offered a better contrast behind a yellow filter. In my video, there’s a shot of leafless tree branches against sky which, lacking the brown on blue colour contrast, needed a bit of extra contrast added  (which I did in the REDCine software, but would more usually be done in the grade). Based on this, my main observation was that the default gamma made the image a little flatter than I would generally prefer monochrome to be, but of course that’s a choice and a sensible default. The purist, of course, would have read Ansel Adams and done it with lighting; there’s something quite satisfying about comparing the notes of early photographers, working in mono, with the experience currently offered by the Epic. RED tell us that the inbuilt infra-red filtration is different on the mono Epic, and it would be as well to double check how its behaviour differs from the colour version as I didn’t have the two side by side to test.

Once the material had been copied off the cards and moved into the REDCine software, things operate much as usual, although with certain options regarding colour balance understandably greyed out. The fluidity of shuttling around clips in REDCine is about the same as the colour version. You’d have maybe expected it to be faster, given that there’s no debayer to do. Offloads from the cards, at least via eSATA, are reasonably prompt, although I’d probably go for the USB3-capable card reader for preference as the driver situation may be slightly easier. In the interests of trying all the common approaches, I also recorded the live output of the camera. RED is already talking about an HD output module for Epic, recording to flash cards in direct-to-edit formats. Alexa is used in that mode very commonly and it avoids a production being locked into a proprietary workflow, so it’s as well that the issue is being addressed.

In the grade, I found it tempting to push the blue gamma a little and cool off the images. Perhaps this is a subjective inclination based on the subject, an obviously wintry day, and we might find that a tropical beach scene begged warming up. Historically, projected black-and-white film would always appear bluer than, say, the ambient lighting in a cinema, if only because the film has a xenon or carbon arc lamp behind it which has a comparatively high colour temperature and, at least in the early days, very deep blacks. The existence of a dedicated monochrome camera but with the characteristics of a digital one is genuinely new, at least outside the realm of industrial and machine vision cameras, so it’s not surprising to find that new approaches suggest themselves.

Ultimately, the value of a black and white camera is really dependent on the value of monochrome as a technique. There's as many ways to approach that question as there are movies to be made, but with modern production design leaning firmly towards tight control of colour in any case – see the “teal and orange” debate – there have probably been worse times to try and sell it as an aesthetic. Also, while it's easy to leap to the conclusion that black and white is solely a tool for material that's intended to appear historic, it's only necessary to do a Google image search on the term “fashion photography” and note that at least a third of results are monochrome to realise that this isn't the case. Many regimes in which a degree of abstraction is desirable, such as music videos, remain heavy users of black and white imagery, even if their purpose is to deliberately reference historic material in hopes of inheriting some of its cachet. The things that establish the popularity of a photographic style are complex, but, rather like a text written in Latin, there's a certain undeniable classicism to a greyscale image.

I don't think the mono Epic actually produces that classic-looking style out of the box – the image is too visibly that of a modern cinema camera, with a shadow response and highlight behaviour different enough from pre-colour film stock that laypeople would recognise it as contemporary even if they didn't know why. That is of course exactly how you'd want to shoot your material, so the fun really starts in the grade. I found that people started assigning images to a particular photographic decade based more or less on how much contrast they had, with every few percent of lost shadow detail suggesting a decade older. How much of this is really accurate and how much of it is based on people's recent exposure to rather degraded duplicates of 1920s and 1930s silent film is debatable, but the mono Epic is certainly capable of doing that if it's what you're into. Equally, while I don't shoot as many pictures of pretty girls as I'd like, I wouldn't be too concerned about achieving that fashion-show look of inky blacks with flatteringly low contrast skin either, although as with many electronic cameras, a healthy degree of underexposure would probably be a good idea.

To sum up: this is an Epic, with all of the characteristics of an Epic, the sensitivity and high frame rate options, but built for real black-and-white purists. To most people, the advantages of this camera over simply desaturating a colour image are slight, especially given the high resolution of the conventional Epic. Even so, it does make it difficult for a truculent producer to go back on the monochrome decision, and as a commentator mentioned in response to my opening article on the mono Epic, there may be other, more specialist applications in science and engineering. And most of all, it’s nice to see a company doing something unusual like this, especially as it’s hard to see that it’ll make them a lot of money as the market is necessarily small. Ultimately the raison d’etre of The Monochrome Epic is to do one job as well as possible, and in an industry and a technical discipline that’s been under huge financial pressure to cheapen up for decades, that’s no bad thing.

Video below. Don't forget to turn "HD ON" for the best images.