Sony ENG vs Super-35 and the challenges of ergonomics 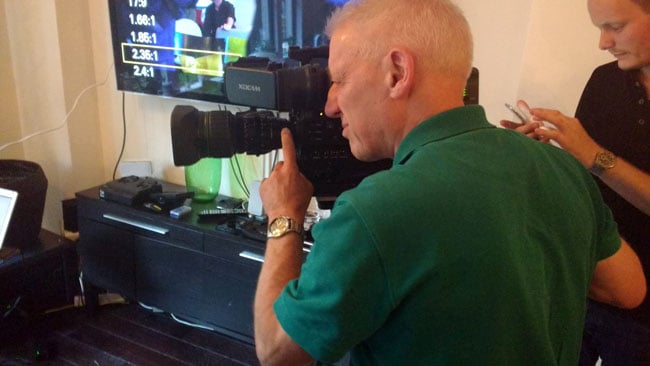 Excellent ergonomics are indispensable in news and documentary work.

A recent Sony event had some interesting insights on how current ENG and Super-35 cinema cameras compare to one another (and how well one could shoot in the other's style).

It's a reality that cameras are now separated much more by their usability and ergonomics than ever before. This fact is clearly recognised by distributors WTS Broadcast, who recently organised an event in London in concert with Sony to discuss the ways in which traditional, ENG-style shoulder mounted cameras and those with super-35mm sensors contrast and complement each other. This is something we've talked about quite a bit in terms of both camera bodies and the lenses that can and should be used with them, so it was clearly worth taking a look.

Held in rooms on Golden Square in London's Soho media district, the event was naturally an opportunity for Sony to showcase its products. This helps, because the company not only enjoys a long and respectable history in three-chip broadcast cameras, but also boasts a very comprehensive range of super-35mm cameras at all price points. The display included the PXW-X400 and X500, representing the traditional news-gathering camera, as well as the F-series big chip cameras with various rigging options. In all fairness, this article wouldn't be complete without also mentioning some of the nicely laid-out cameras from JVC and the Blackmagic Ursa Mini, which competes very directly with Sony's FS7 in this exact market. 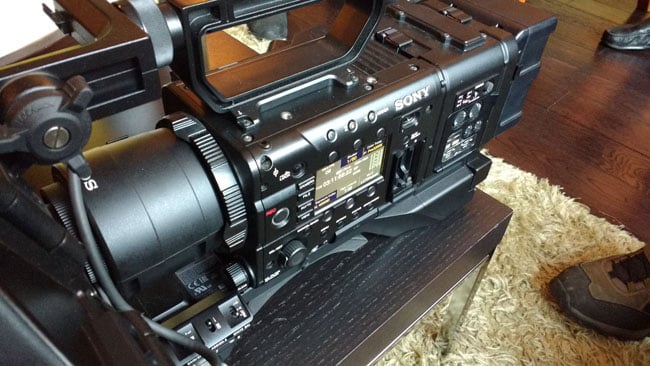 Sony's documentary dock for the PMW-F5 and F55.

Perhaps the star of the show was the extremely laudable work done by Sony on its CBK-55BK documentary dock for the F5 and F55 cameras, which was demonstrated in concert with the LA-FZB1 lens adaptor. This facilitates the use of B4-mount ENG lenses with the big-chip F5 and F55; the resulting camera is extremely usable and, of course, of very high performance overall. It's rather long, since the adaptor adds several inches on the front and the audio control section of the dock adds several on the back, but that's never really been a problem with ENG cameras outside of the pokiest locations. It's well-balanced and demonstrates the company's understanding of what handheld camerawork is all about. Strapping some bullhorn-type handles to the front of a cinema camera has always been a poor option for handheld camerawork and this is absolutely the right solution. 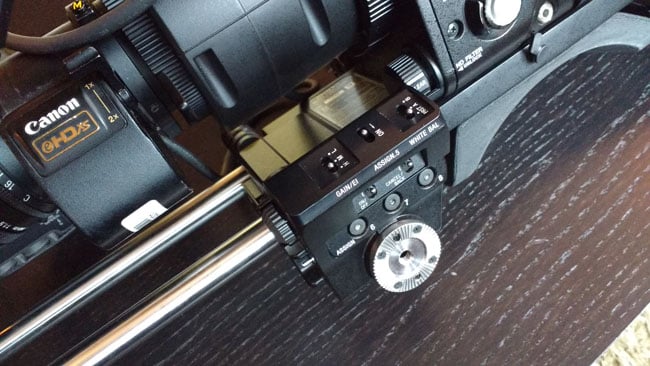 White balance and gain switches are in exactly the right place on the documentary dock.

It isn't a perfect solution, though. The FZB1 adaptor costs a lot of light (two and a half stops) and there is necessarily something of a penalty in terms of optical performance. The cameras do support active aberration mitigation with compatible lenses, where the lens reports its zoom position to the camera so that the camera can rescale the colour channels to remove fringing. This is very clever and helps a lot, but the complete outfit as demonstrated perhaps makes the most sense for a freelance operator who already owns a B4 lens. Purchasers of an F5 or F55 who had previously owned B4-mount gear might reasonably decide to buy the dock and the adaptor. Whether this configuration makes sense as an outright purchase is another matter.

Someone interested in shooting news would, quite probably, reach for the company's PXW-X series, which are cameras of enormous capability that we've talked about in the past. As well as offering a completist's dream of interconnection options, Sony carefully adopts the shoulder-mounted layout that's been standard for decades and makes many camera operators very happy in so doing. The X500, in particular, also offers high frame rate capability and is likely to be one of the last cameras made with CCD, rather than CMOS, sensors. The PXW-X series are reasonably compact for ENG cameras and lack the presence of a fully-rigged F55, which can be much more of a factor than perhaps it should be, but given the hypothetical task of lugging one or the other up a mountain, the choice is clear. 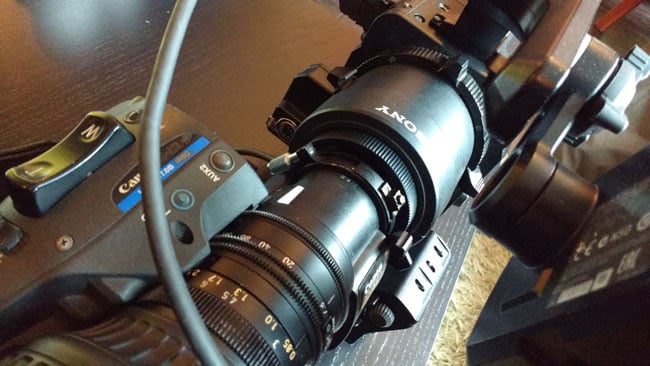 Lens adaptors can make B4 zooms usable on big-chip cameras, but there are downsides.

The impact of the differences in field of view and depth of field between all these camera systems are often overstated. With most video lenses opening up to f/1.3 or so, it's often not that difficult to equal the depth of field of a super-35mm sensor at f/4, which was and remains a common shooting stop. Moving back and zooming in works, too, and while big chips can fit more and larger photosites, having three chips to play with means that the gap in sensitivity, resolution and noise performance between the two approaches is not perhaps as large as it would seem.

Of lenses and ergonomics

As the discussion both during and after the event indicated, though, this was an event not so much about cameras as it was about lenses. The documentary outfit for the F55 is great and puts all the right switches in all the right places, but it's still reliant on the lens grip as part of the ergonomic solution and Sony doesn't make the lenses. Its lens adaptors (which include another one with inbuilt ND filters) are effective, but expensive and fundamentally exist to undo some of the things that a B4 lens does; this is a considerable inefficiency in terms of space, money and optical quality. It's surprising, somehow, that lenses for single-chip cameras, which don't have to land an image on three chips at once and which aren't required to achieve incredibly short wide ends, are actually cheaper than their big-chip cousins. F-series cameras with the Fujinon 19-90mm zoom were also shown and, despite the eye-watering price tag, many of the news camera crew present considered that range inadequate for ENG. These concerns generalise to cameras from other manufacturers, too.

We're still looking at Fuji and Canon, then, to solve some of the underlying issues here.