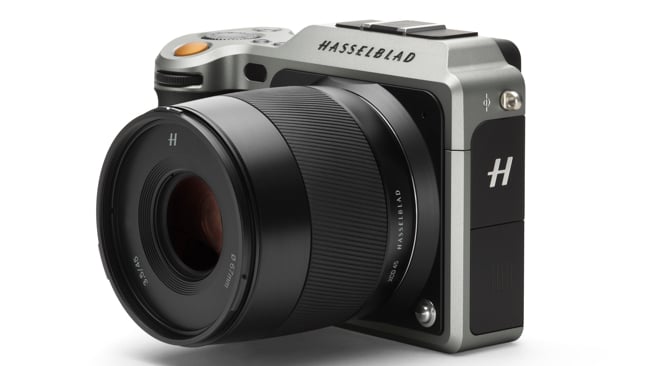 As rather thoroughly leaked online in the hours running up to the event, top end camera manufacturer Hasselblad has launched what it calls the worlds’ first mirrorless medium format camera.

The company confidently calls the X1D a game-changer,and certainly it has enough going on inside its immaculately styled body to back up CEO, Perry Oosting’s, claim that it represents a pivotal point in the company’s 75 year history.

A completely new family of dedicated autofocus lenses with integral central shutter, the XCD range, has been developed to support the unit, with both the 45mm and 90mm version available at launch (it’s also compatible with the existing H system lenses and accessories with an adaptor). Shutter speed varies from 60mins to 1/2000th, with full flash sync throughout.

ISO is rated as 100 to 25,600; it features Dual SD card slots, GPS and WiFi; and it’s weather and dust-sealed case is penetrated by a USB 3.0 Type-C connector, Mini HDMI, and Audio In/Out.

You will notice that so far we’ve yet to talk about video. That’s because it’s HD, which, when measured in combination with the new camera’s price point, is going to leave video shooters slightly less than impressed. That’s because probably the only really heavy thing about the X1D is its price: namely your pick from €7,900, $8,995, or £5,990.

That is not cheap, especially when measured up against some of its very capable rivals in the market.

There was a point at the start of the live presentation from Gothenburg that officially unveiled the camera to the world where Oosting cradled it in his hands and walked up and down the assembled rows of journalists to enable them to take a close up. “Wrong camera, wrong camera, wrong camera,” he said pointing at their glowing screens. “We still have a lot to do.”

At that price tag, you feel that he has a point.