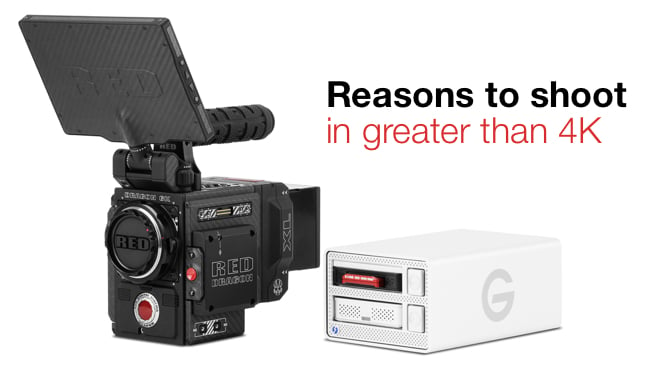 Reasons to shoot in higher than 4K

We've been working with RED and G-Technology to look at the issues, opportunities and practical solutions around shooting in higher-than-4K resolutions.

In the days of film, nobody talked directly about resolution. Experts knew that certain films had more sharpness and resolving power than others, but this certainly wasn't the primary reason for choosing a particular film stock. Far more likely was that a type of film would be chosen for its "look" – colour saturation, contrast and overall tone – than for its ability to distinguish between small objects. Lab tests would confirm the approximate resolving power of a film type, but there was never a rigid grid built into the old analogue medium.

But that's precisely what digital sensors, the modern equivalent of film, do have. They're made from a grid of light sensors that imposes its form on every image. So this grid should be as small and as fine as possible, within reason.

This is simply true. No one ever argued that collecting less information was better (except, perhaps, Lomo and oil painters). The point is that you can always reduce resolution, but you can't increase it. If you can shoot in a higher resolution, and you're equipped for it, then there's no reason not to, and there will be tangible benefits.

Extra detail is good for VFX

When you're working with VFX – let's say you're keying some actors against a green screen that's going to be transformed into the White House, or a seaside town from the middle of the last century – it's essential to capture as much detail as possible so that the compositing software can distinguish between the foreground and the background. There is no qualification to this principle. The more pixels, the better it works.

Digital sampling superimposes a grid of squares on reality, but reality doesn't always consist of objects with upright and horizontal straight edges. Try to represent a circle, or a straight line that is almost perpendicular to the grid, and there's a problem. It's called aliasing. The only way to fix it (or at least reduce it enough that it's not visible) is to have more pixels. You can still see aliasing in HD, but to a much lesser extend as you go do 4K and higher. But for a typical viewer watching 8K, it's nonexistent. Michael Cioni, CEO of Light Iron, summed it up nicely, when he said "It's about smoothness, not resolution".

If you shoot in a resolution that's significantly above the delivery resolution, you will have immense flexibility in post to reframe the shot. As long as the majority of TV and film is finished in 4K or HD, there is an opportunity to take advantage of higher resolutions by reframing images after the shoot. There are huge benefits to this. It means that missed or badly aligned shots can be salvaged. Having a larger frame means that there is a margin for error in case the action goes beyond expected limits. And with key framing, it's possible to follow the action with extreme precision. This isn't something that you have to do all the time, but it's certainly nice to have for those times when you need it.

Better for compression and distribution

This is a technical point, but it's an important one. Remember in the transition from SD to HD when you could tell, even in the lower resolution, that a TV program had been shot in High Definition? It just looked nicer.

A compression algorithm is always going to work better when it's fed more information. If you had to copy a painting, which would give the best result: a Lego model of the Mona Lisa, or the real thing? It's the same with codecs. The more information (particularly spatial resolution), the better the compressed result, even at much lower resolutions. Want the best result in the cinema? Shoot in a high resolution. Want the best result on Vimeo? Shoot in a high resolution. Of course, everything else has to be good too (saturation, dynamic range, etc), but shooting in a high resolution and maintaining that quality through post, all the way to distribution, is absolutely the best way to ensure that your material is going to look good, whatever device it's viewed on.

Shooting in resolutions beyond 4K gives you extremely fine control over the look of your production. It's often artistically valid to use older, specialised or more idiosyncratic glass. Super high resolution means that you not only capture the overall look of a lens, but every little nuance, too. It's a step beyond merely capturing the look of a scene: it captures the essence, too.

Get the best out of a "Bayer" sensor

Most modern sensors use a Bayer filter. When everything's taken into account, it's the best way to  make a cinematic large-sensor image.

This is not just an aesthetic judgement. The fact is that the RED's 8K sensor captures more information on a film set than ever before. Period.

More data to make movies exactly how they're meant to look. Digital video from cameras like the RED Weapon and the Panavision DXL (which uses the RED 8K Dragon sensor) is now so good that the "film look" is just a subset of what is now possible.

The first demonstration of a CD player wasn't all it seemed. The neat-looking player was practically empty and the real work was being done by a wardrobe full of electronics behind a screen. It's always like that in the early days of a new technology paradigm. But this always changes.

While 6K and 8K might have seemed "experimental" a few years ago, 6K is now easily manageable and 8K isn't far behind. Within a very short time, even 8K workflows will be routine. Everything's ready for it. RED's WEAPON cameras were designed from the ground up for super high resolution. RED's R3D codec makes file sizes manageable. And now G-Technology has large, fast and robust drives that thrive on hard work. Specifically for working with RED, there's G-Technology's EV Series RED Mini Mag Reader for direct, rapid transfer from a RED camera to a G-Technology storage system.

There's no need to hold back from super high resolution productions. Just plan and go.