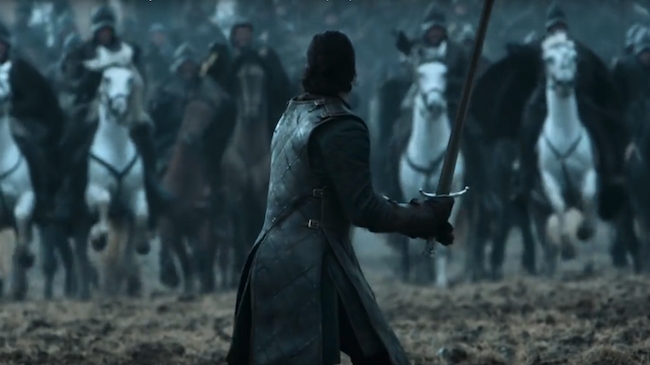 40 horses galloping at Kit Harrington - all shot in camera

This weekend, Episode 6.09 of Game of Thrones redefined both the concept of event television and what you can do on the small screen. Spoilers ahead. And violence.

Miguel Sapochnik directed last season’s epic battle sequence Hardhome, so it was no surprise that HBO’s juggernaut was going to try and raise the stakes when it came to this season’s marquee episode — as if titling it Battle of the Bastards wasn’t enough.

What probably astonished most viewers was how good it appeared. This might be a fantasy series but, as is often the case with Thrones, the violence is all too visceral and real and it didn’t put a foot wrong throughout the sequence.

We don't often link to other articles on RedShark, but there is a really excellent interview with Sapochnik over on Entertainment Weekly which gets inside the Director’s mind and how something like this comes together, including the fact that the historical battle it was modelled on changed from Agincourt in 1415 to Cannae in 216BC as the budgets changed. It’s an unsurprisingly complicated process but the detail is fascinating, such as every time they charged the horses it would take 25 minutes to reset the fake snow and rub out all the hoof prints, so how do you account for that reset time in your production schedule?

But, if anything, it was the first 10 minutes or so spent with Daenerys and Tyrion over in Meereen that truly raised the bar for everyone else. Effectively, this was a triple-dragon action sequence and, while there were some long shots that didn’t quite gel if you were going to watch it with an exceptionally critical vfx eye, the dragon sequences themselves were jaw-dropping.

Sapochnik tried to keep things realistic — or as realistic as you can with dragons — basing many of the aerial manoeuvres around WWII Spitfire footage, while also allowing the dragons to break frame and add naturalistic camera movement to the sequence. And then, as is the current trend, they built a great big practical model (“a multi directional computer-controlled hydraulic gimbal device,” says Sapochnik) shaped like a dragons’ shoulders and sat Emilia Clarke on it.

So, if you watch those sequences again and marvel how well they got a human rider looking good on a CG mount, it’s because they didn’t; they just built a real dragon.

Regardless of the emotional payoff of the storylines of Battle of the Bastards, more than anything it showcases what you can do with superb craft skills and meticulous planning, not to mention what is rumoured to be the biggest single episode budget in television history, surpassing even the infamous $13m spent on the pilot of Lost

But while you wait for that, you can have a look at the fascinating Anatomy of a Scene: The Battle of Winterfell below.