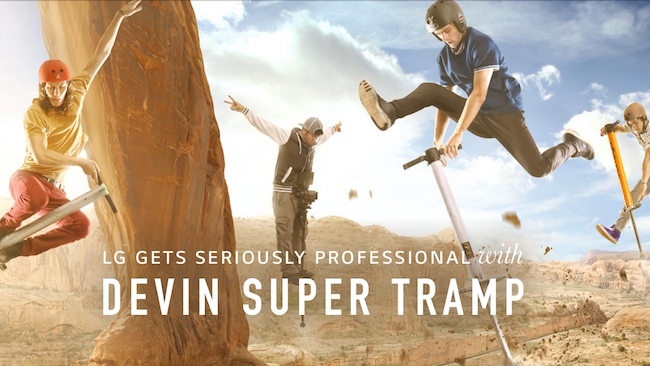 How working at 21:9 on LG UltraWide monitors helps one famous YouTuber produce some visually stunning content.

Devin Graham is a Videographer, Editor and Producer, but nowadays he’s chiefly known as a YouTuber; one of the new generation of creatives working on the platform that has seen him grow his Devin Super Tramp channel to over 200 videos, 4 million subscribers, and over 765 million views.

The video below of extreme pogo jumping is a case in point .

“For years, we've filmed everything at 16:9. Now, the camera technology is there, so we can shoot at 21:9. That's huge for us; now we can make it look like it was an actual movie.”

Even better they’ve got a monitor that accommodates it too, namely LG’s new 21:9 UltraWide monitor.

“When we go out on location, we're basically getting all the paints possible,” comments Devin. “Then we get into the editing room, and that's when we start painting and basically exposing that canvas we want to share with the rest of the world. We need the biggest canvas possible to tell those stories.”

And without getting into projection territory, 21:9 is probably about as big as you can go. What’s more it enables the team to do everything in the same place without having to use multiple workstations, which, given the often parlous economies associated with YouTube production, is undeniably a good thing.

Good to have the space to do it… And you can have a look at how he puts his material together — and how those UltraWide monitors help — below. To find out more head to: http://www.lg.com/us/monitors/lg-34UC98-W-ultrawide-monitor