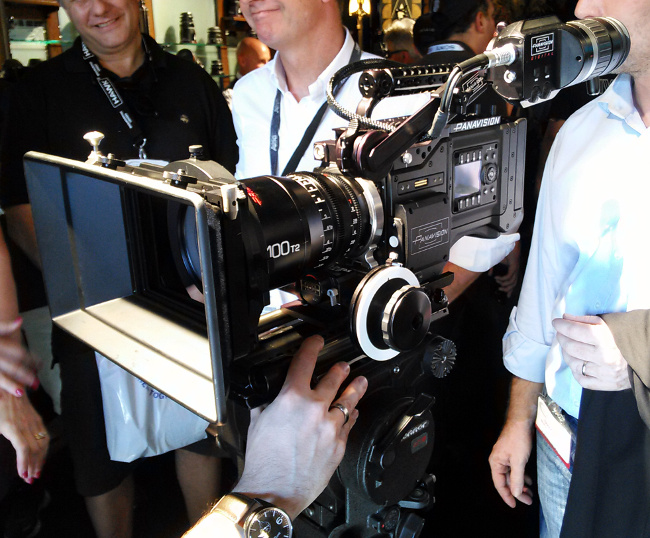 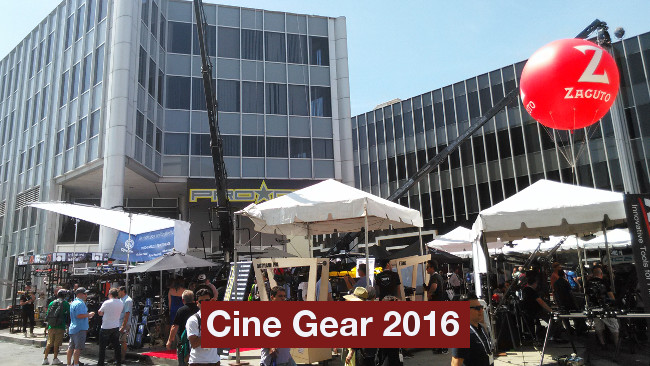 While Cine Gear is a small fraction of the size of NAB Show, it still brought a few new and noteworthy products to bear.

I'm sure that our readers are familiar with NAB Show, the film, video and broadcast industries' biggest technology convention. Each year in April, NAB Show turns the massive Las Vegas Convention Center into a multi-hall exploration of new technology and products from the biggest names in the industry to a sea of upstarts looking to make their claims as the next hot thing.

Each year, less than two months after NAB Show, another much smaller convention of cinema and video production technology descends on the Paramount lot in Hollywood. For those that attended NAB in the past, all of Cine Gear's booths could probably fit into a quarter of lower South Hall of the Las Vegas Convention Center. Although Cine Gear is, at most, a tenth the size of NAB Show, it's still a wonderful event for any LA-based professionals that couldn't make it out to NAB this year.

Panavision shows off the DXL

The most newsworthy exhibition may have been working prototypes of the Panavision DXL camera. The forthcoming 8K camera is the product of extensive collaboration, as evidenced by its RED Dragon sensor (or, is it brain?), software by Light Iron, a Panavision company, and a body by Panavision itself. (For more information on this camera, check out our recent coverage of it HERE and HERE.)

The crowds around the Panavision booth were perhaps the largest of any exhibit, with attendees jockeying to get close to one of the prototype cameras. 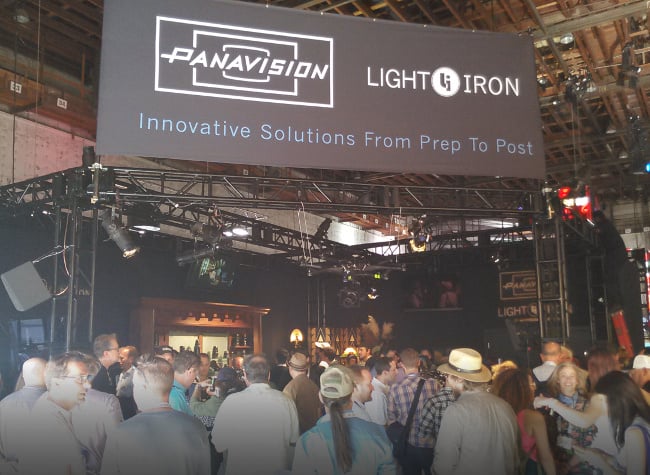 The crowd around the Panavision / Light Iron booth at the DXL prototypes. 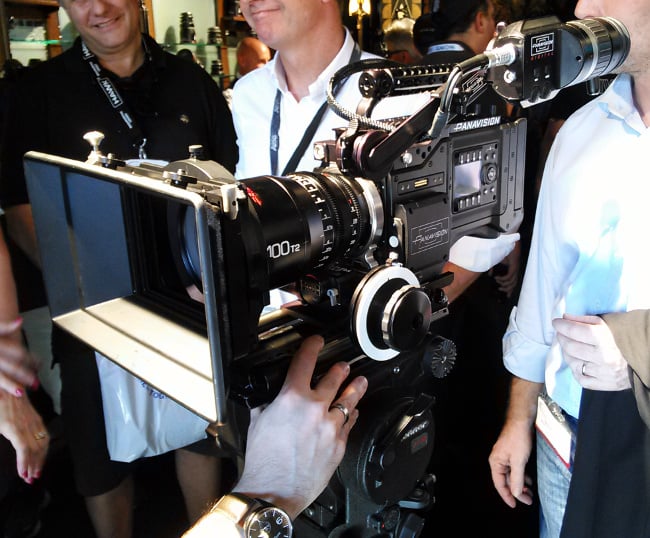 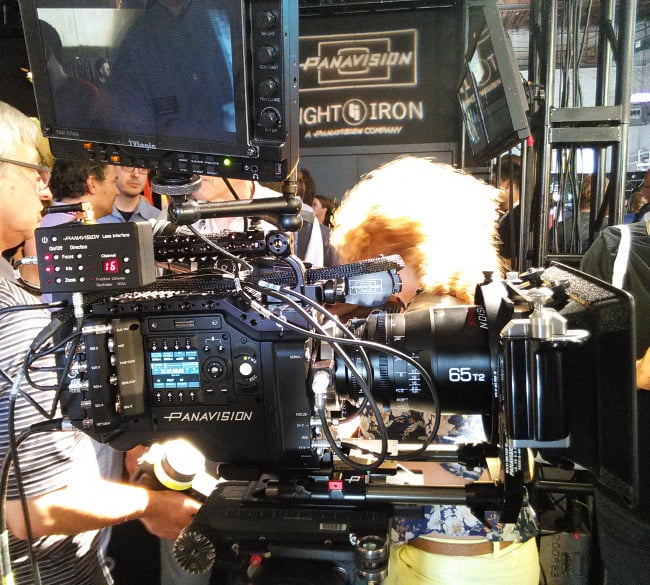 One could find Canon among the booths in the New York Street open air portion of Cine Gear. I was a little surprised that Canon wasn't located in one of the air conditioned stages, where other major brands, like Sony, Panasonic and GoPro could be found, but the company still had at least one product (or, rather, product combo) that we hadn't covered back at NAB Show. Yes, the recent entrant to Canon's zoom lens line-up, the 18mm-80mm, was represented (our review can be found HERE), but my eye was caught by a cross manufacturer bundle aimed at doc and wedding videographers. 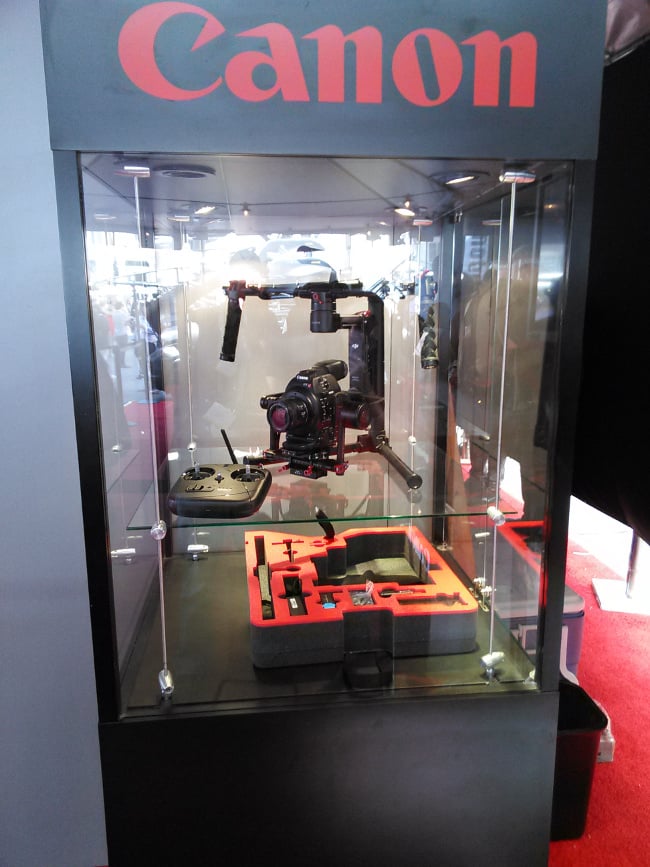 Canon, DJI and Sennheiser in one case.

Canon isn't shy about striking agreements with other manufacturers who make products that support their cameras in use. Canon has partnered with Atomos in the past to include the company's monitor/recorders with certain Canon cameras. At Cine Gear, Canon showed off another such bundle, this time looping DJI and Sennheiser products into the kit. The package includes a C100 Mk II camera, Sennheiser AVX-ME2 wireless lav mic set and a DJI Ronin-M 3-axis stabilizer, which can be pre-ordered at major retailers for $5,999, which is purportedly $1000 less than the list price (after instant rebate).

Strolling past the outdoor exhibits, I ran into a small booth for Photon Beard, a company that makes LED and other lighting products. We've reviewed Photon Beard's products very favorably in the past, so I stopped by to say "hello." I was greeted by Pete Challinger, who handles US operations for the company. 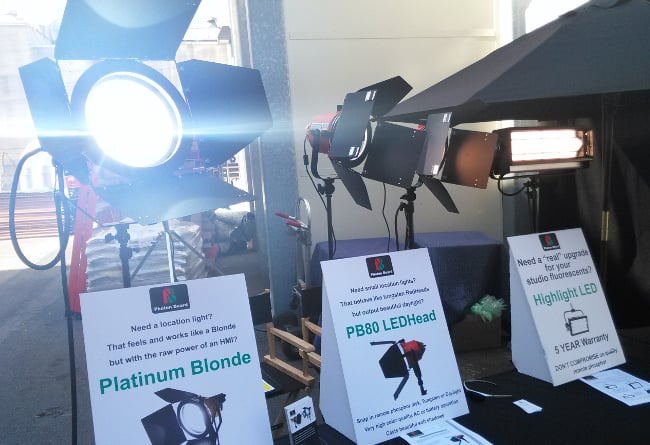 The three lights that Photon Beard brought to Cine Gear 2016.

As seen in the photo above, regular RedShark readers may find the Platinum Blonde and the LEDHead familiar, but the Highlight LED light is probably new to our readers, as there are currently only three pre-release units in the world. Coming in an assortment of sizes, the Highlight LED is primarily a studio light, but Challinger said that it has a specific production use which may appeal to indie filmmakers and smaller production houses.

When used in conjunction with a cyc-hood, the Highlight LED can be used to evenly light a greenscreen from relatively close proximity, reducing the amount of headroom and perhaps instruments needed to perform the task. I was sworn to secrecy, but I can reveal that a major company/brand is using these lights throughout its soon-to-open facilities in London. When these lights become available to review, we'll get our hands on a couple and gauge the practicality of this greenscreen set-up (and likely spill the beans on that aforementioned 'major company/brand').

In addition to the new offerings from Panavision and Photon Beard, as well as the Canon / DJI / Sennheiser kit, G-Technology showed off its G-Rack 12 server and expansion products. Each features 12 hard drive bays and supports up to 120 terabytes of storage. And SmallHD unveiled studio editions of its HDR daylight-viewable field monitors in 17 and 24-inch varieties.

As with any show, there's always the sense that it's impossible to cover all the relevant news coming out of any event. If you were able to make it out to Cine Gear this year, let us know in the comments what grabbed your attention.