Vislink and the state of the art in ENG 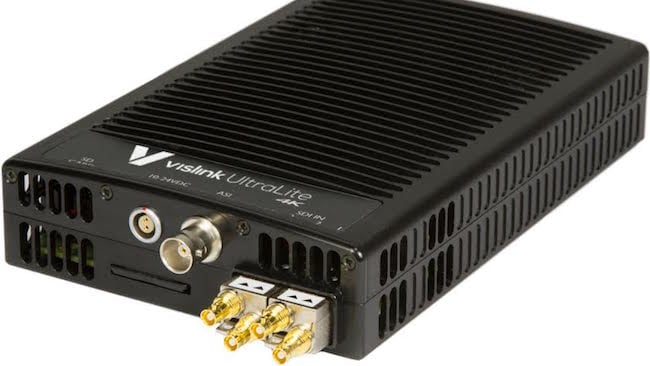 Just what you need for wireless 4K production

We don't often think of electronic news gathering as an area of filmmaking, but it's a big one. The infrastructure required to bring us live news involves quite a bit of dedicated technology, as a tour of Vislink’s kit shows.

Vislink's infrastructure begins with their infrastructure. It launched a new system at NAB called Vislink News Net that gives news journalists operating out of trucks access to the services and media assets of their home base.

Starting at the base station is a live view of the live proxies from the field. The news director can see what every journalist is set up on, and switch immediately; with Vislink's system, there is no need to shut down a feed in order to start up a different one.

For safety, Vislink doesn't automate the antenna orientation; it requires the journalist in the field to align it visually to ensure that they keep the antenna clear of obstructions while turning it, like trees, telephone poles, and especially power lines.

The app also enables the journalist to request the base station antenna. Vislink's system provides a scheduling service, so that a journalist won't accidentally pull another journalist from the same antenna in the middle of a live broadcast.

The system can maintain a 60-70mpbs uplink on each channel, so it is able to support 14 trucks on a each channel, and in addition support multiple channels per antenna for a total of 80 trucks.

For times when a journalist is in the field waiting for their story to begin, Vislink’s system enables them to work from their truck with the same access to shared servers as they would have back at the ranch, enabling them to edit stories while in the field.

Vislink doesn't make or provide cameras. Instead, it provides a set of devices that the news team can integrate with their cameras.

First of is the Remote Operator Panel, or ROP. Vislink offers a generic ROP that works with a variety of cameras, but their systems work with manufacturer-provided ROPs as well.

For those unfamiliar with ENG, the ROP provides remote control over camera settings like white balance, ISO, and even allows a remote operator to change a subject's shirt color.

To extend the range of the ROP, Vislink offers several versions of a UHF receiver. One version is a small box that can be connected to most ENG cameras, and Vislink has partnered with Grass Valley and Sony to develop custom panels that integrate the Vislink UHF antenna into the camera body.

Customers can use the H.265 encoder to enable them to transmit a 4K feed, or to transmit additional HD feeds, so braodasers using HD might still choose the HEVC encoder.

Vislink also makes a transmitter called HeroCast, which they say is the smallest and lightest transmitter in the world. It's so small and light that it's available as a GoPro module, and requiring only 4.1 watts, it can run off of the GoPro camera's battery. It's designed to be rugged and waterproof to the IP68 standard, so that it can be used for surfing. The NHL uses these with their goalpost cameras.

Part of why Vislink's system can do so much is that it provides the technology for the entire stack, enabling Vislink to optimize the components to work together. Their solution is very complete; the only thing that they don't provide is security. Instead, Vislink allows customers to use the security system that they prefer.

Vislink's system can enable news broadcasters to cover breaking news stories more thoroughly than before, and at the same time enable their journalists to continue working while in the field between events. Being able to have multiple crews live active at the same time on each truck enables them to provide more extensive coverage, but also do so in multiple languages at the same time.