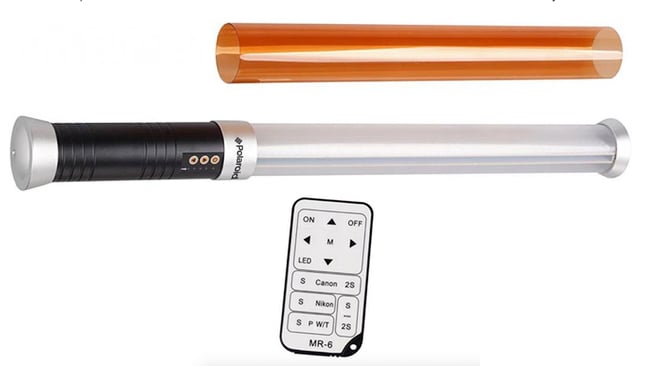 We review a budget LED light wand that bears the Polaroid name. Is it suitable for pro use?

Following the bankruptcy of instant-photo pioneer Polaroid, the company's remaining assets, as well as name rights, have been sold to various licensees. Currently, a number of action cameras and photo accessories are being produced in China and marketed under the Polaroid name. My own introduction to photography came as a child with my Polaroid Land Camera 700, so readers will pardon any sentimentality I associate with the brand name.

The Polaroid BrightSaber Pro is an inexpensive ($169 on Amazon) light wand with very close similarities to the $500 Wescott Ice Light. Amazon also lists a number of seemingly-identical units under different brand names at prices as low as $120. It would thus seem to me that one Chinese OEM is producing the product for a number of marketers.

Polaroid sent me a sample unit, but I do not have a Wescott Ice Light to test it against.

The Star Wars-looking light measures 22" in total length and contains 298 separate LED lights with an advertised brightness of 1600 lumens. It can run for about 2 1/2 hours from an included NP-F550 battery, but also includes an AC adapter.

It has an integrated rotatable CTO filter to allow advertised color temperatures of 3200k and 5600k and is advertised to have a throw up to 33 feet. While I didn't measure distances precisely, I will say that the light is evenly distributed across the wand and is quite bright. I easily illuminated the other side of a long room.

Brightness is adjustable, but there are no indicators to show relative levels other than a brightness series of 4 LEDs. There are 10 increments of brightness and measurement is shoe-horned into those 4 LEDs. Additionally, the light has 4 modes – continuous, rapid flash, SOS strobe and slow flash.

The unit also includes an IR remote which controls the light's modes, as well as brightness. Like any IR remote, it must be within eyeline of the unit.

A common use of such a wand would be handheld, but in the base, it does have a tripod thread for mounting.

I have always been an advocate of avoiding the cheapest LED fixtures on the market. But after working a bit with the BrightSaber Pro, I could consider an exception.

The throw is excellent. Adjustments are simple. The rubber grip is comfortable and the mounting threaded hole makes it versatile.

No CRI is specified in any of the publicity for the light. I suspect that is because many amateur or advanced amateurs who would be attracted to this price level wouldn't be concerned about such things. And, frankly, at that price point for a simple carry-around fixture, I'm not that concerned about it either.

I only had one concern when dealing with inexpensive LEDs: green spike. I killed the room lights at night and shot a piece of white bead board illuminated by the BrightSaber in both 3200K and 5600K modes, with camera set to those respective color temps. I then viewed the footage on a Vectorscope. No green spike. For web interviews or quick and simple work, that's adequate enough for me.

In a future review, I'll share with you some observations on my Remote Phosphor LED Reporter kit and $849 (list) kit, consisting of two Pipeline Remote Phosphor sticks with power supply, dimmers, stand and grip adapters. That is a product in a totally different league.

But let us consider that, with the Polaroid BrightSaber Pro, we have an under-$170 solution which is versatile and sufficiently accurate for many professional applications.