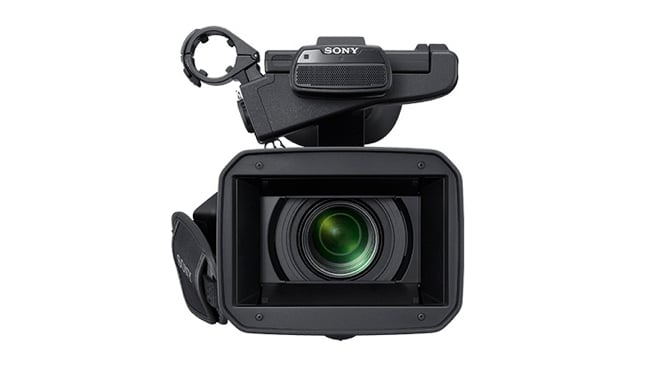 Sony's PXW-Z150 a product which highlights the fact that something has become mainstream: 4K, it seems, is now everyday. At a little under £3000, the diminutive Sony is affordable but also offers a reasonably large, one-inch sensor. This is not to imply it's trying to be a cinema camera, which it certainly isn't, but the big chip is a good thing nonetheless.

It's long been clear that cramming twelve megapixels (which is more or less what 4K demands) on a sensor any smaller than that tends to lead to rather compromised pictures. Sony does make imagers with 12.4MP of resolution at scales less than 10mm diagonally, for instance, but describes them as “for security cameras and industrial applications”. We might expect to see one inch sensors, then, continue to become more and more mainstream as the need for higher-resolution cameras grows.

Ordinarily we'd be able to start talking about other things at this point, but there are a couple of capabilities intrinsic to the sensor on this camera which make a fairly noticeable difference to its performance. All camera manufacturers are aware of the issues surrounding rolling shutter and vague claims about speed of readout are common. In the case of the Z150, the claims are reinforced by a refreshingly well-controlled degree of rolling shutter (it's there, but it's reasonably subtle) and the fact that the camera will, in HD, achieve 120 frames per second. Sony advises that this is done without simply omitting pixels, which avoids moire effects.

It's good to see this sort of thing starting to become available on straightforward news and documentary cameras. The Z150 does suffer the problem that the highest 120fps rates are only available in what we might call 60Hz mode, recorded to files marked as 30 or 60fps; in 50Hz mode, only 100fps is available. This has been a common bugbear in Sony cameras for a while and there's clearly some shared core software involved which we hope can be updated to be more flexible at some imminent time. That concern aside, the sensor on the Z150 is a pretty decent piece of silicon, doing a reasonable job of tricky subjects such as tail lights on cars during night exteriors which do eventually bleach white, but probably rather less so than competing cameras.

The fundamental performance of any camera is really down to a combination of lens and sensor, and the Z150 is even more of an expression of this than most because the design of both elements is so closely integrated. The 12:1 optical zoom is reasonable for the size, weight, and cost, but as we've discussed previously, Sony also leverages the excess resolution of the sensor to provide an even longer effective focal length.

In HD, this extends the range to an effective 24:1, or 18:1 in 4K. Now, it's worth being clear that this is not a perfect technique: if a sensor has excess resolution, the resulting images will still be improved by oversampling even if they're being scaled down to the recorded resolution, and using the extra resolution to extend zoom range will necessarily change the noise and sharpness characteristics to some small extent.

It is necessarily an imperfect technique. It's a useful one, though, and well worth implementing on a news camera. This is certainly not the digital zoom of the bad old days, and it takes over from the optical zoom cleanly enough to use both on-shot.

The rest of the camera is relatively straightforward. The use of SD cards is a big plus, greatly reducing the effective cost-of-ownership for the camera in comparison to almost any of the proprietary formats. This does mean limited bitrates, and Sony's usual over-caution with respect to commodity flash is at play here. 100 megabits per second is just barely adequate for 4K images and represents half the bitrate per pixel of an equivalent HD stream at 50Mbps. SD cards can handle far more and it's a shame not to see more generous numbers here.

All of the Z150's 4K recording modes are 4:2:0, 8-bit, with 10-bit pictures limited to HD. It's clear that the camera is designed to produce compact, easy-to-handle files that won't stretch anyone's laptop or internet connection too harshly. There is, for more exacting jobs, a 3Gbps SDI output which might be recorded externally, though this is HD-only and won't carry high frame rate material. The HDMI output, on the other hand, is 4K.

Taking into account the space occupied by the deep battery bay (which happily takes Sony's common and venerable NP-F-series batteries) and the lens, the actual camera is very small indeed, and so is its power consumption. At a shade over six watts, with largest compatible batteries a little over thirty watt-hours, the camera should run for a good four hours. This, along with the compactness and low acoustic noise, is only achievable given the manufacturer's willingness to create custom silicon, without relying on programmable logic devices.

All this comes together to create a whole that's clearly very focussed on size, weight, ease, and convenience. Nobody's going to go and shoot a major feature film on this camera. It's a fixed servo lens with nonlinear focus progression, which is possibly the world's least popular approach. The highlight performance, while creditable for the price, isn't really ready for the big screen and a hundred megabits isn't enough for 4K that will be graded more than very slightly. As a super-lightweight documentary camera, though, it's well put together.

There are incidental things, such as the Mi-Shoe hot shoe mount, which make life particularly easy for people who are willing to buy Sony's compatible accessories. Various accessories are available, but really it's all about mounting a radio mic receiver without recourse to extra cabling for signal and power. It sticks out a bit, but the convenience of all that integration will be worthwhile for some people.

Ultimately, the specifications of the PXW-Z150 are generally a shade lower than something like Panasonic's DVX200, but it's two pounds lighter, about 15% cheaper, and, crucially, consumes under a third the power. It does a bit less, but if the log shooting and variable frame rate aren't an issue, as they won't be for current affairs and much documentary work, the option to carry a small, lightweight camera that shoots very big frames is potentially very interesting.