The Sony PXW-Z150: “It is astounding what Sony has achieved for this price.” 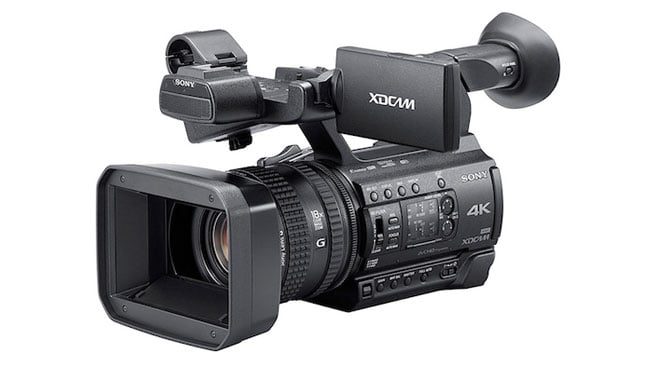 The Sony PXW-Z150 4K camcorder packs a lot of punch for its money. In fact, Sony touts this camera as the lowest priced professional 4K camcorder on the market. Ned Soltz is very impressed.

The PXW-Z150 is based around a 1” stacked Exmor RS sensor in contrast to the Super35 size sensors in such cameras as the FS5, FS7, F5 and F55. The smaller sensor of course accounts in part for the lower price but the smaller sensor does provide an advantage for the camera’s target market of news, event and run and gun shooters. A smaller sensor implies less shallow depth of field. When we shoot on the run, we actually need more depth of field. As Dan Chung of Newsshooters pointed out when he reviewed the Z150, the reason that Super16 was so popular in newsfilm days was precisely for this greater DOF.

The Exmor RS Stacked Sensor was developed several years ago by Sony and is appearing in both its video and mirrorless camera lines right now. Perhaps the main advance of this sensor is the incorporation of phase detection autofocus, which makes autofocus faster and more accurate. This is certainly the case, for example, in the Sony a6300 mirrorless camera which incorporates phase detection autofocus into its sensor.

As you would expect then, the autofocus mode in the Z150 is fast, without much of the hunting that older contrast detection technologies exhibited. I would even go so far as to say that it is actually a useable autofocus. It also borrow face detection from the Sony mirrorless camera systems. Face Detection is enabled from the camera menu system and not only focuses on faces but also can track. That feature alone makes this an excellent event and ENG camera.

To differentiate the video camera line from Sony’s mirrorless cameras, the Z150 shoots the XAVC-L LongGOP codec in an MXF wrapper, unlike the more consumer XAVC-S codec in the mirrorless cameras. It also adds legacy MPEG2 HD 422 for compatibility with users such as news organizations and reality TV still shooting MPEG2.

The Z150 shoots UHD (I do cringe a bit when a manufacturer advertises UHD as 4K) at rates up to 30fps. It is disappointing that the camera cannot achieve a 60p frame rate. In UHD, the footage is 8-bit 4:2:0.

Another impressive feature is dual SDXC slots. Most cameras in this price range only have 1 card slot.

The fixed lens is a Sony G lens, the same series of lenses in Sony’s mid-range interchangeable lenses. The G glass is sharp, has good contrast, minimal chromatic aberration and is just a very solid performer. TheZ150 lens is 18x and the camera incorporates both digital zoom as well as Sony’s Clear Zoom which is now appearing on virtually every new Sony mirrorless and video camera. Clear Zoom will zoom aprox 2x in HD and 1.4x in 4K with virtually no degradation in resolution. When Clear Zoom is enabled, the camera will zoom seamlessly from optical to the clear zoom ranges, unlike the FS5 at its original introduction. Built-in image stabilization certainly helps with shots like that if shooting handheld (definitely not recommended, though).

The lens has a real iris ring, something that I miss in this era of totally fly by wire lenses. It also has manual focus and manual zoom rings.

Another disappointment, though, is the ramped aperture of the lens. It starts at f/2.8 at the wide end but ramps to f4. I wish Sony could have found a way to keep the lens a consistent f/2.8 throughout.

While it has an OLED viewfinder, I basically find these viewfinders pretty worthless and just depend on the pull-out screen. The screen is of more than adequate resolution but I would definitely recommend some kind of hood if using it outdoors in bright light.

I am impressed with how well this camera handles. It only weighs 5 pounds ( 2 1/2kg) including battery and is remarkably well balanced.

The layout is very much like all Sony camcorders so nothing new to report here. It has a 3 position ND; preset, A&B white balance selection and dual audio pots.

It borrows yet another feature from higher end cameras, which is the MI shoe for compatible microphones and lights.

Streaming functions allow FTP and other transfer. It does not stream to the web as do entries from several other manufacturers.

It is also impressive that a camera of this size and price range has 2 full-size XLR inputs with switchable phantom power as well as SDI and HDMI outputs.

That’s a short summary of many of the camera’s technical attributes. The big thing about any camera, though, is the image.

In order to differentiate it from other offerings in the video and mirrorless ranges, the Z150 only shoos in Rec709 color space with 2 hypergamma-like gammas Sony calls Cinetone 1 and 2. The result here is that the image is video-like. Now there is nothing wrong with that and a combination of grading and post-production plug-ins can give you virtually any look you wish. But the only way to get any boost in dynamic range is to use one of the Cinetones, which look very much like an 800% hypergamma.

I, for one, do not find this a flaw. Everybody these days seems to talk about “film look” but we just have scenarios where “video” looks just fine.

The images from the Z150 are crisp thanks both to the lens and sensor, as well as to the Sony secret sauce. The Cinetone gamma shots gave more range in grading as one would expect.

The UHD footage was surprisingly good. I have concerns about jello-cam UHD footage from the a6300, for example. This camera produced very adequate UHD 30p images. I did notice some aliasing in some shots, which persisted even in HD. The aliasing was more obvious on the computer display than it was on my reference monitor playing through a Blackmagic card.

Using the higher level image stabilization produced images that were notably softer than either low or no stabilization. This is to be expected, but was perhaps a little more pronounced than I would have anticipated.

In S&Q mode, 120fps footage was also a bit soft with some artifacting. Again, I have very low expectations from slo-mo from anything other than a dedicated slow motion camera. I think it is unfair to assess any video camera on the basis of slo-mo. If you really need high quality slo-mo, rent a dedicated camera or use a high-quality plug-in in post such as Twixtor.

The Z150 lists at $3599 with a street price of $3199. I once paid more than that for a Sony Hi8 camera. It is astounding what Sony has achieved for this price. In this age of small ENG cameras, its high quality lens and clear zoom answers many of the concerns about zoom range when covering many stories. It is highly portable for any shooter on the go. The menu structure is much simpler than many Sony cameras making it ideally for an on the run shooter to manage. The video image is crisp and the 3-position ND filter makes light control easy. It isn’t a low-light king. Indoor event shooters will definitely want to consider a light.

There is nothing like the Z150 for the money. News, event and documentary shooters will definitely want to take a closer look.