Reimagining the video camera from scratch

Replay: This article was written in 2016, but it is interesting to look back in the context of how camera technology has evolved in only a few years. 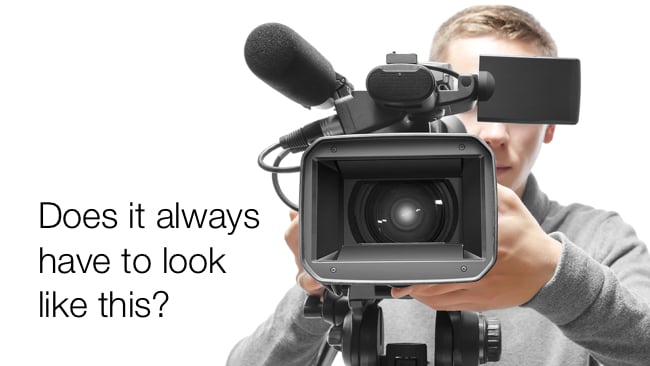 If we started from a clean slate (and I'm thinking here mostly of documentary work and the more spontaneous end of drama), how would we make a camera?

Today there's no reason why a camera shouldn't be small and light. With stabilisation, we no longer need weight for stability and light cameras are easier to stabilise. This might be difficult for some to accept – pros like chunky, heavy cameras – they feel serious, they have a macho/military appeal. But chunkiness breeds more chunkiness, so let's start from scratch with something light.

Lenses can be small, too, unless you insist on a large sensor and a long zoom. Perhaps we can drop the current obsession with large sensors and bokeh and go for a chip no larger than 1". Today, we are faced with a choice between inexpensive still lenses, expensive PL and B4 lenses or, if we want less expensive zooms designed for video, integrated non-removable lenses. Clearly designing a camera around a zoom lens makes for enormous savings, as electronics can compensate for what would otherwise be flaws in the lens, but couldn't that lens be custom designed yet still detachable? Yes, it would add to the cost, but there is precedence for this in the Sony range with cameras like the Z7.

Or should we go for a large high resolution sensor and a fixed, wide lens and make our zooms in post? OK, maybe we're not ready for that yet, but let's start from a shape that makes the most ergonomic sense, then put the elements of a camera into it: a light, sculpted, balanced frame where we can position the electronics, power supply and monitor exactly where we want. These could be modules, but not modular blocks bolted on to 15mm bars, but units designed to fit together on that sculpted frame. That form could balance on the shoulder, if we want it there, but be light enough to held high or low. But if it's light and stabilised well enough, maybe we're not going to need to put it on our shoulder that often.

Now that monitor screens are bright and the camera is stabilised without having to press against the eye, maybe we can dispense with a viewfinder…and must the viewfinder/monitor be attached to the camera anyway? How about a monitor attached to the operator or a heads-up display separate from a small stabilised camera unit? We could hold that camera wherever we wanted it to be without having to stretch or crouch to see the picture.

And where do we put the controls? Some controls we want at our fingertips (focus, iris, zoom), some we might only from scene to scene (white balance, ISO), some only at the start of a shoot (frame rates, codecs). Could we integrate some of these controls into a handgrip that could be positioned wherever we want? How about putting some of these on remote (the technology is cheap and reliable now). Imagine a lightweight, flexible, stabilised camera with a DIT/assistant keeping control of iris and focus, out of the way, maybe in a different room. This could be great for intimate, fast, observational documentary work or improvised drama. Some of these controls could be on a module that could be returned to the operator for single-person work.

Some controls (like focus and zoom) might need to be physical, but others could be on a dedicated touch screen (avoiding heavily nested menus) that could be configured and placed exactly where we wanted it. The thing about physical controls is that we only really use one at a time, so how about one really nice wheel (like a follow-focus) that could be instantly switched between different functions? The speed and range of that wheel should be configurable as well.

Do we need really need audio inputs on the camera? Having a camera tied to cables going to mics or mixers seems anachronistic. We might want a directional or stereo mic on the camera, but wireless links to a mixer (if we have a sound recordist) or personal mics (if we don't) should be all we need and those receivers could surely be built into the camera, rather than bolted to it. Do we actually need to send that sound back to the camera? Shouldn't syncing multiple audio sources be almost automatic with today's technology? And now that high quality digital audio recorders are so cheap and small, are multiple recorders a viable alternative to wireless?

Let me know. It all really comes down to what we actually want to do with this camera. But it would be great to see a manufacturer starting from scratch and discovering just what might emerge.

The camera of the future may be something we simply can't imagine today. What can be done on a smartphone with limited optics, but a huge amount of computing power, continues to astonish.

The Lytro, with its multi-lens light-field camera, is a totally different approach to recording moving images. Or a 360-degree lens, a very high definition sensor and sophisticated software could give us another way of making most of our key creative decisions in post, not when we shoot. These, to me, seem to have much more connection with the world of VR and games than movies and I am far from convinced that the worlds of games and movies will ever merge. But, as always, I reserve the right to be completely wrong.