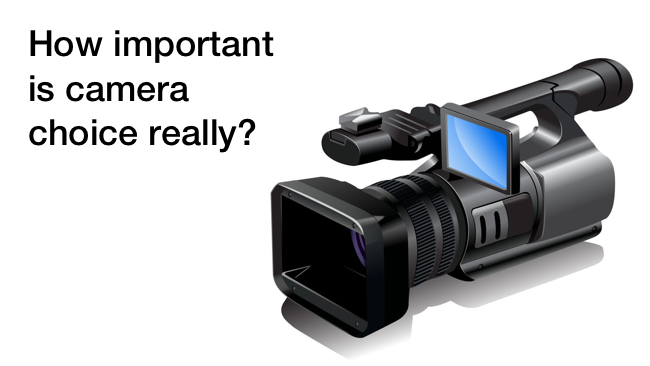 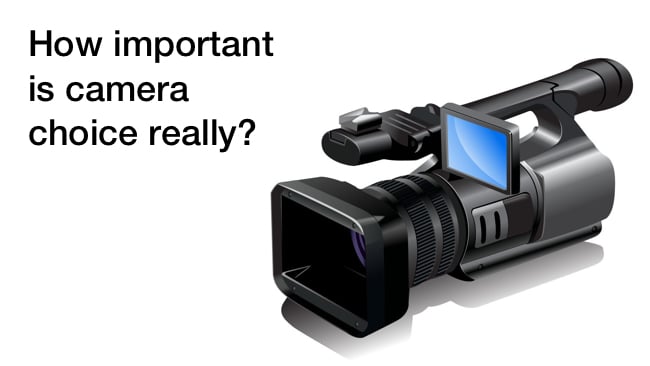 Roland Denning argues that we should place camera choice in its proper context: as a means to serve our craft and not the other way around.

Do we worry too much about cameras? This may seem like a perverse thing to ask on a website dedicated to news of the latest equipment, but as Phil Rhodes said in a recent article on RedShark News, all professional cameras are capable of creating great pictures these days.

We are in an era where there seems to be an obsession with finding a camera or lens that will create that crucial 'look'. The term 'cinematic' is thrown around and, increasingly, I'm not sure what it actually means – except 'not like video'. But then video doesn't look like video any more. I meet student filmmakers who are convinced that if they could just get hold of an Arri Alexa and a set of Cooke primes, it will make their film the masterpiece it deserves to be.

I'm not for a moment denying that there is a significant difference between cameras and lenses, that the Alexa has an unparalleled ability to render skin tones or that there is a 'Cooke look' that is subtly more pleasing, just that there are more important factors at play.

I would defy anyone to distinguish the origins of a well-shot and graded sequence, whether it originated from an Arri, a Canon, a Sony or a Blackmagic. Or even, in most cases, if it was shot digitally or on film. Yes, cameras behave differently, but we take that into account when we light, filter and grade. Some may need more light or less contrast or more care in post to get the pictures you need, but if your pictures look bad, I doubt that it's the camera's fault. In the end, it's not the camera that determines the look, but the DoP.

Manufacturers' camera tests always look good – not surprisingly, as they are intended to show the camera at its best. They generally tells us much more about the manufacturers' ambitions and the market they are aiming for than the camera itself.

Comparative tests (camera shootouts) that attempt to compare cameras under neutral conditions have their own problems. Yes, they can reveal differences between cameras. However, unless a camera has serious flaws, that in itself is not that useful. In the real world, there is no neutrality; we work to get the picture we want and this might mean we light and grade differently with different cameras. In a grading or telecine suite, we are not working towards reproducing a colour chart accurately, but to create the look we want.

A camera is, of course, a means to an end. A revealing (but perhaps impractical) test would be to get an experienced DoP to shoot a series of real-world scenes (under real-world pressure) with two different cameras with the aim not to show their differences, but to produce the same end result. The DoP could then tell us which camera makes the job easier and which imposes its own style. It might be, for instance, that a camera that is more sensitive (allowing you to work with less light or softer light) is preferred over a camera with superior colorimetry, or a camera that seems a joy to shoot with produces images that are harder to grade. Or it could be simply that the one camera wins because it is faster to work with or ergonomically superior.

The wonder of glass

I have an old-fashioned approach to lenses: I like them to be sharp. To put it very simply, you can soften a sharp lens, but you can't sharpen a soft lens. And when people start to enthuse about the particular qualities of bokeh, I tend to nod off.

There is a video on the web by an experienced DoP, comparing Leica and Cooke lenses. The Cooke, he claims, has a '3-D' quality that makes characters stand out from the background; part of this is to do with what could be considered 'imperfections' in lens.

I'm sure the differences were very obvious when the original material was projected and, even compressed down for YouTube, you can still see the differences – but only just. What struck me was that if he just moved one of his lights 6 inches, the difference between shots would have been enormous. If he wanted the figure to stand out from the background, dropping the light on the back by half a stop would have had far more effect (I should emphasise that I am in no way criticising this guy's lighting or the validity of the tests, just that the aesthetic differences in lenses were the icing on a very deep cake).

There primary decisions to make in creating a 'look' is where we put the camera and where we put the lights. The secondary decisions are taken in post and the changes that can be made in a modern grading suite, from the subtle to the dramatic, make a mockery of judging the 'look' of a camera from online showreels. And with the trend to shoot low contrast raw or log-files, grading is an essential part of the process, not an option.

As an aside: often overlooked in the look of a movie is production design; it's much easier to create great frames in a beautifully conceived and designed set. I think this is a huge part of what the general public perceive as 'great photography'.

High end gear is not magic

High end gear is expensive, but it is not just about picture quality. It's about reliability and consistency, about a kit where everything fits together and matches, equipment the crew is familiar with and which the producers have heard of. The industry is essentially conservative, because anything unfamiliar costs time or is seen as a risk. That's why high-end gear is worth every penny on large productions.

With owner-operators, it is a different world. If you have found lenses, a camera body and a rig that give results that could match a camera 10 times its cost – which is entirely feasible today – good luck to you, and who cares if it is not regarded as 'standard equipment'. It might have few quirks that you have adapted to which don't affect what's on the screen. You might have to work a bit harder because, generally speaking, the more sophisticated the gear, the easier it is to achieve consistent results. However, for a hire company, that kit would be a false economy.

Let me make clear what I'm saying here: it's not that the camera and the lens aren't an essential part of the equation, but they are seldom the key element in creating the look of a film.

And I want to go a step further and say the visual subtleties of an image is not what defines cinematography. It's really about creating a series of frames to tell the story. Where the characters are in that frame, where the light falls and what it reveals of the environment are nine tenths of what cinematography is about, whether it is drama or documentary. If there is magic, this is where it all begins.