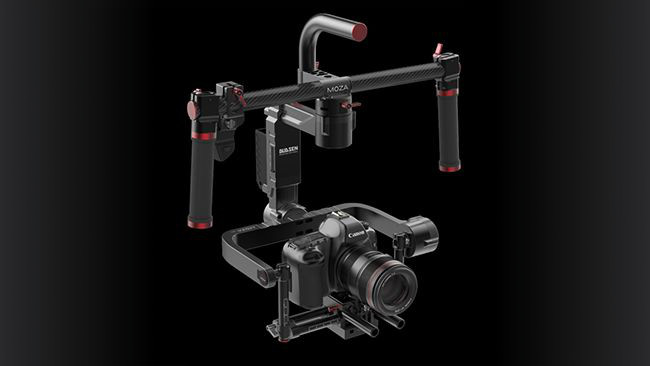 Gudsen is making a name for itself in the UAV / drone space with the announcements of new products that will compete directly with those made by well-known manufacturers.

Gudsen may not be a household name or be as ubiquitous as FreeFly or DJI, but it certainly looks to be an interesting competitor to those companies.

Specialising in stabilisers and cages, the company has three main 3-axis offerings for different weight categories. At the top of the scale is the Moza Pro, a device that is designed to carry weights of up to 6.5kg, meaning it can take a Red Epic if required.

Main features include a built in 5.8G wireless video transmitter, a wireless thumb controller to control pan, tilt and focus, as well as the ability to use the rig in either underslung (traditional) or upright modes for height. There is a third configuration called Briefcase mode, which allows the gimbal to be carried alongside the operator like a, well, briefcase.

The gimbal can be set up by way of a smart phone app, which can adjust the gimbal parameters automatically, depending on the camera you are using.

The Moza Pro is soon to be released and we will bring you more news when it is. Next on the list is the Moza Lite 2. The number denoting that this device is now in its second incarnation. The Lite 2 is designed to accommodate lighter cameras such as DSLR's, the Blackmagic Cinema Camera, and the Pocket Cinema Camera, with a maximum payload of 4kg.

Gudsen claims to have made some major strides in improving the stabilisation in this model, using more powerful PMSM motors with integrated digital positioning encoders and more advanced FOC algorithms.

Like the Moza Pro, the Moza Lite 2 also utilises a wireless thumb controller for major functionality, as well as being able to utilise a smart phone app to configure the device.

The Lite 2 comes with an intelligent battery with a 2800mAh capacity, which Gudsen claims gives a runtime of between 4-8 hours depending on the payload and environment. The battery contains overcharge and discharge protection circuits for piece of mind.

In addition, Gudsen is also offering a power distribution unit, which allows power output to devices such as wireless video transmitters and follow focus units.

Once again, like the Pro version, there are three modes of operation for varying situations. From a personal point of view, the Lite 2 looks very interesting for potential drone usage with the optional UAV mount accessory. At 2.2kg bare weight, it is, in fact, slightly lighter than the DJI Ronin MX at 2.77kg, although it has 0.5kg less carrying capacity. Though, in the real world, this should not be of huge consequence.

At $1099, it would appear to be very competitively priced compared to its nearest rival, the Ronin MX. Stay tuned as we will be putting the Moza Lite 2 through its paces very soon.

Last in the 2016 Gimbal lineup is the Moza Mini GP. A handheld gimbal designed for use with GoPro cameras. This one is interesting because it addresses one of the main issues with previous GoPro gimbals. This one is waterproof! Well, rainproof at least. It won't stand a full on dunking into a river, but it does open up possibilities for filming in foul weather that weren't previously possible. Imagine fully gimbal stabilised footage from a mountain bike, for instance. Price and release date TBA.

Honourable mention should be made to the new Sony A7 cage, too. This is a slight departure from standard camera cages in that the Moza cage integrates a control grip for controlling camera functions, such as shutter speed, focus and recording start/stop without touch the camera itself. The cage also integrates a 4800mAh battery system for longer shooting.

In all, Gudsen looks like an interesting new company and it will be interesting to see where 2016 takes it. As I mentioned, we will be taking a look at the Moza Lite 2 as soon as the review unit arrives. In the meantime, press release after the break…

MOZA Lite 2 is a 3-axis handheld gimbal from Gudsen. As the upgrading version of the original MOZA Lite released in May 2015, the gimbal push the technology of camera stabilization to the highest level with its first application of advanced FOC algorithms, PMSM motors and digital positioning encoders. With a max payload of over 4.0 kilograms, the lightweight gimbal can support
a wide range of cameras from the mirrorless, DSLRs, to Canon 5D markIII.

MOZA Mini-GP
It is the world's first wearable GoPro gimbal with rainproof design. The miniaturized structure allows it to be portable enough for capturing cinematic shots anywhere.

Features:
1.Portable enough with miniaturized and compact construction;
2.Fully compatible with GoPro HERO4/ 3+/ 3;
3.Wearable for mounting to a helmet, body, backpack and the bike;
4.Rainproof design for working in the harsh weather;
5.Tilt\pan control via joystick on the handle;
6.A detachable handle works as a wireless controller;

It is a form-fitted cage designed to support the Sony a7S, a7SII, a7R, and a7RII featuring a multifunctional handgrip with remote control and power supply system. The user can access to control the start/stop recording, camera focus and shutter through tapping buttons on the grip, without touching the camera directly. An in-handgrip battery with a 4800mAh capacity supplies additional power to the camera to prolong the shooting project. Other accessories like cable clamp and rodriser make it convenient for mounting accessories easily.