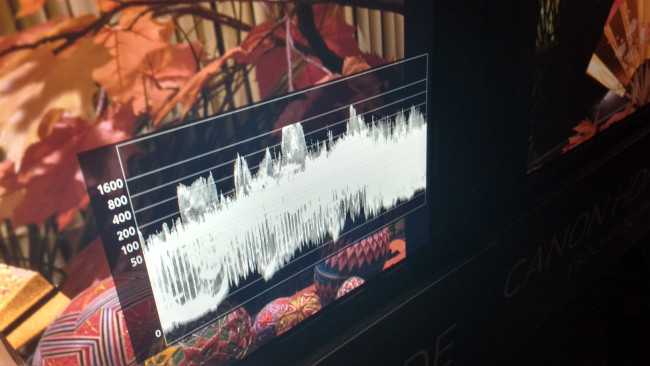 HDR Display at the Canon booth

Products that featured high dynamic range capabilities, and the companies that made them, could be found throughout this year's NAB Show, but there's still more work to be done before HDR is a working reality for many productions.

The people who put signs on trade show booths must be running very low on the letters H, D and R at the moment, such was the popularity of the term at the recent NAB show in Las Vegas. Everyone with even the vaguest claim to the technology was promoting it, with the result that genuinely impressive demonstrations jostled for space alongside technologies offering dynamic range that was high in name only.

Dynamic range, in the most everyday sense, is easily defined: it's the difference between the smallest possible and largest possible amounts of something. This works perfectly well for most displays, which have a maximum white and minimum black point, with the dynamic range figure representing the difference between them. What complicates things is that the dynamic range of a light which can be either on or entirely off, with zero output, is theoretically infinite. An OLED video display is, on paper, capable of doing exactly that. Because of this, we need to moderate our expectations based on a reasonable assessment of the maximum brightness compared to our subjective impression of what a normal picture looks like.

The situation with a TFT display (by which term we'll refer to thin-film transistor liquid crystal displays, notwithstanding the fact that some OLEDs use TFT technology to drive their pixels) is somewhat different in that the maximum brightness can be increased by specifying a more powerful backlight, but the minimum brightness will tend to move upward as well, since no TFT panel can ever quite block off all the light that's behind it. Some manufacturers report interesting results in actual practice, with brighter backlights provoking greater absolute dynamic range for reasons that aren't entirely clear. Complicating issues further is the fact that very powerful backlights consume a lot of electricity, making it difficult to produce large displays that can reasonably be battery-powered.

Probably the most impressive HDR displays, those shown by Dolby as part of its Vision system, are actually TFTs, albeit with a backlight made out of high-powered LEDs which can be individually modulated to create zones of brighter or dimmer pixels. It's impossible, with this technology, to place a pixel of absolute maximum brightness directly next to one of absolute minimum brightness. Video display brightness is rated in units of candela per square metre, given for some reason as "nits." At 4000 nits, the Dolby display can achieve an overall contrast ratio for normal picture content that's probably the most impressive of any technology that's been shown to date.

There is no absolutely perfect solution; perhaps the closest thing is Sony's extremely expensive BVM-X300 OLED display which achieves a healthy peak brightness of 1000 nits. Although many standards (and much popular opinion) suggest that 1000 nits is a bare minimum for a display to be considered HDR, the absolute-zero blacks of the OLED panel make for very impressive images which satisfy the most exacting technical and subjective assessments. The company's new 55-inch PVM-series display, when shown next to the X300, doesn't scale quite such enormous heights, but does a solid job nonetheless.

Why, then, were so many people at NAB showing fairly average TFT displays rated at 400 nits and calling them HDR? Showing a letterboxed or pillarboxed image on such a display places black pixels next to the black plastic bezel. This can make it extremely, sometimes embarrassingly obvious that the black level is better called a charcoal grey level and that the actual amount of dynamic range possible on these displays is quite limited. Yes, there are economic considerations, and no, it isn't possible for every monitor on every job everywhere in the world to be a BVM-X300 or another OLED. Even so, the amount of wannabe HDR exhibitors at NAB 2016 was significant, and it's as well to be aware of the sort of the rather dubious shortcuts that are being attempted.

With all this in mind, Atomos's new Flame series has so far been well-received and may provide a cost-effective way into HDR shooting. The company promotes the device as having a 1500-nit panel and, while it's possible for a poor black level to compromise the device's claim on true HDR performance, subjective assessment suggests that this is not the case. The claim that Atomos's new device will make any log camera into an HDR camera is perhaps slightly hyperbolic, though. Any camera capable of more than about thirteen stops of dynamic range has always been an HDR device, in some sense, and the ability to view more of those stops on a video display is just one of the things required for a full HDR workflow.

Even so, it's a far better option than shooting blind, with Rec. 709 displays which can show either uncorrected log, which looks flat and grey, or an image with more pleasing contrast, but which omits much highlight detail. The point of HDR displays such as Atomos' is to show the same information with more pleasing contrast and we'll look more closely at these interesting devices when they're available for review.

In the meantime, the fast-rolling HDR bandwagon will continue to suffer an issue that's at once simple to understand and complex to resolve: that of standardisation. Companies such as Colorfront showed high-end, high-priced tools for HDR delivery at NAB this year and, with some of the video-on-demand distributors beginning to demand it, it's easy to see what provoked these developments.

The key thing to realise, though, is that the situation is still very much in flux. HDR consumer displays are still very rare and there are at least three competing standards for distribution. Dolby Vision is possibly the most capable, but also the most complex to implement and clearly intended to generate ongoing licensing revenue for Dolby, in much the same way as its surround sound encoding (and, now, Atmos) has always done.

While there's nothing intrinsically unfair about this, we might hope for a more open, less expensive approach, particularly so that independent filmmakers can one day begin to create HDR material. There's nothing technologically preventing this from happening at reasonable cost, as Atomos has shown, and the balkanisation of production standards around licensable proprietary technologies is bad for everyone. Given that these decisions involve consumer equipment, we might reasonably start digging in for a format war – if the buying public can be persuaded to buy a new TV all over again, of course. It's at least possible that they will, though, as HDR can be very, very pretty.