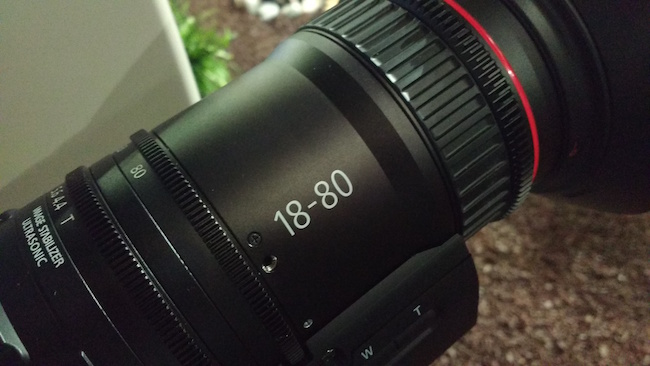 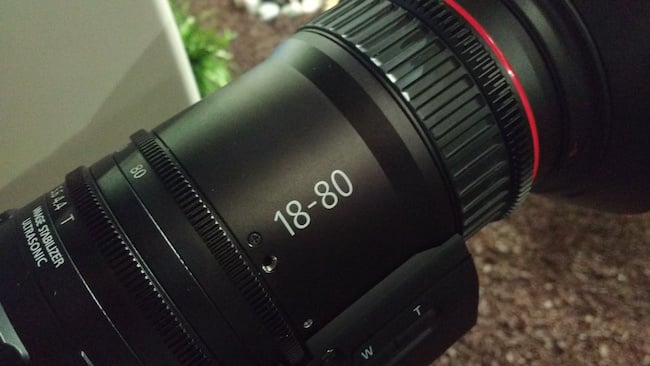 We first wrote about Canon’s latest zoom when it was released last week. Phil Rhodes digs for more on the NAB showfloor and reckons it's a rather significant  release.

News of Canon’s new 18-80mm zoom has gone some way to bridging a yawning chasm in the market that’s existed for some time: a lens for the profusion of low-cost, big-chip cameras, most of which are used in circumstances where frequent changes of prime lenses are less than ideal. Our exposure to the lens currently consists of a few minutes on a trade show booth, so this is certainly not a review, but it’s an interesting enough proposition to provoke intense, even heated, discussion.

This is perhaps the case because preexisting solutions are unenticing. Option one is stills lenses, which often aren’t parfocal and have awkward controls, or B4-mount broadcast zooms with adaptors, which can be expensive and often suffer poor optical quality as a combined device. It’s an okay solution for people who already own B4 glass, but a dubious way to start afresh.

The need for something like the 18-80, then, has been clear for years; the development time on something like this probably implies that the company began developing it with commendable speed after it became clear that such a thing was required. At $5500, the value proposition is interesting: it’s probably too expensive for the most budget-conscious filmmakers, but it’s cheaper than almost any solution built around a B4 lens, and it’s cheaper than most of the cameras it will be used with. Equally, the higher end jobbing camera owner is likely to have already taken out either a loan or a kidney and used the proceeds to buy one of the preexisting big-chip portable zoom lenses, and might hesitate to turn up to some jobs with a lens like the 18-80.

It’s designed for a very specific part of the market, then. A fully-rigged Ursa Mini is worth more than this lens, making it entirely reasonable to suppose that quite a lot of them might find a home on the front of Blackmagic’s product. I find the argument that it’s too expensive for that market to be perhaps slightly pessimistic; a lens is a longer-term investment than a camera, and anyone with the wherewithal to buy an FS7 will realise that the lens will long outlast the lightproof box containing the sensor. The other common plaint is that the lens’s T4.4 maximum aperture is too slow. We might assume that this factor is mentioned frequently because B4 broadcast zooms tend to be fast – very fast – with apertures down into the 1.4 range.

To achieve the given spec at the given price point, though, something had to give, and aperture is a reasonable place to compromise. It isn’t ideal, but modern cameras are fast, and the considerations of pulling focus at wide apertures on a big chip need to be taken into account as well. Nobody wants to pull focus on a super35 sensor at f/1.4, and people with concerns over depth of field control should consider the reality that f/4 is an entirely normal place to shoot 35mm film for theatrical release in any case.

The more relevant criticism might be that the 80mm long end isn’t really all that long. The vastly more expensive Fuji 19-90 is 10mm longer, and really still not long enough in all the circumstances where an ENG lens would do well. Some people won’t like the fact that the focus ring is clutch-coupled to the mechanism as well, so it isn’t directly indexable with follow focus equipment. The people who buy lenses of this type are likely to want to do both off-the-shoulder documentary and ENG work, and the next day, shoot a single-camera music video. This is presumably an engineering consideration related to the autofocus features, but many people would wish for a way to latch the focus ring permanently to the interior mechanism.

This, and a couple of other things, make it fairly clear that the Canon 18-80 is primarily a product of its stills lens department, modified for motion picture applications. There’s absolutely nothing wrong with that, though, and it’s clear that the company can expect to sell these lenses in very large numbers. There might still be room for something at the $8000-9000 range, for people less willing to compromise on zoom range and aperture, and it would be nice to see the lens in other mounts (currently, only EF is supported, and the only way to power the servo grip is via the EF mount contacts).

Perhaps greater involvement from the broadcast lens department, rather than the stills or cinema people, would help. Nevertheless, this lens is an important release, and one that can be hoped to provoke a range of releases from both Canon and their competitors which will, with luck, solve the problem of affordable big-chip zooms once and for all.