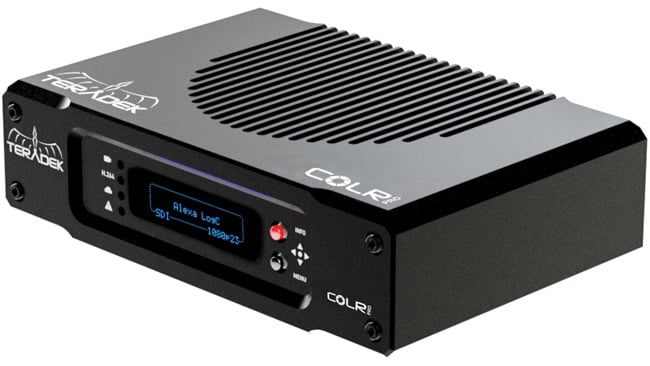 Three new models have been added to the Teradek COLR device family while the company’s Sphere promises to ease the transition to wireless 360 video production.

We’ll get to the black box sitting on David Shapton’s desk during his TV slots in a moment, but first the three new COLR devices: the 4K COLR Pro, COLR Duo, and COLR Lite.

If you haven’t come across them before, the COLR lineup offers a simple ACES-capable solution for wirelessly grading live video footage with the CDL and 33x33x33 3D LUT of your choice. Some of the models also function as a wireless camera control bridge when connected to a camera’s USB or Gigabit Ethernet port. That way, using the camera’s native web interface (or a third-party software solution), COLR can manage camera parameters like white balance & tint as well as start/stop trigger, framerate, shutter speed, and more.

As for the new models, COLR Pro is a cart or rack-mounted 4K colour grading system that adds two independent 12G-SDI inputs and up to four 12G SDI outputs to the platform; the COLR Duo adds a second 3G-SDI output, allowing users to apply unique 33x33x33 3D LUTs with a CDL or 1D LUT on each of the two outputs or independently monitor a clean output signal; and COLR Lite is built from lightweight and rugged ABS plastic and billed as perfect for compact action cameras or small DSLRs/mirrorless units.

The $3000 Sphere, meanwhile, offers realtime monitoring and live streaming of panoramic video content-in HD and features a patent-pending video processing platform for iOS and OSX. According to Teradek, by dynamically adjusting each camera’s white balance, tint, exposure and lens distortion in real-time, Sphere is able to display and stream a consistent panoramic video.

The unit’s hardware interface features four HDMI inputs and a built-in H.264 encoder that can encode up to 10Mbps, providing a realistic 360º-video experience. When connected via Ethernet to a wireless access point, Sphere streams in real-time to iOS and OS X devices and allows you to sync device movement to a perspective mode, view footage in panoramic mode, or simply livestream to a compatible headset or 360º online video platform, including Wowza and YouTube

Shipping is promised as June 2016 and you can see what it can produce in the here and now by watching Teradek’s NAB Live Show on YouTube with the free NAB VR application for iOS devices or by visiting www.NABLiveShow.com.