DJI gets heavy with the Matrice 600 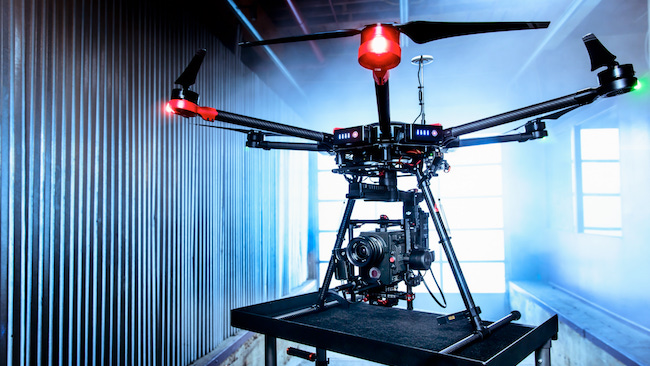 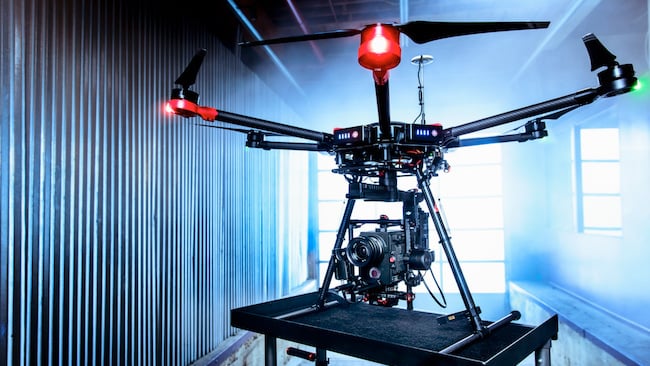 DJI's latest £4000 aircraft is a serious performer capable of lifting anything up to a RED Epic into the air - and looking after it while it's up there.

DJI has been very busy recently with the release of new iterations of its popular Phantom and Inspire range of drones as well as new cameras for them. While DJI most definitely has its hand in the affordable camp, it hasn’t forgotten the more serious industry applications for such aircraft. Previously to have a heavy lift DJI aircraft you would have needed to purchase the air frame and build it yourself along with the associated electronics installation. But now DJI has announced a new all in one solution in the form of the Matrice 600. An aircraft that is certain to be a competitor to the FreeFly Alta.

The Matrice 600 would appear to be a serious bit of kit. Capable of lifting a payload of up to 6kg, this will enable it to fly anything up to a Red Epic. A superb ability for a ready to fly system. Compatibility and mounting systems are available to account for most cameras, including the small Zenmuse X5R, which is mostly flown on an Inspire 1.

One of the most interesting things about the Matrice 600 is the commitment to systems redundancy. One of the criticisms of previous aircraft is that there is no backup should one of the systems crash or make a mistake. There is no data available for the systems to cross reference. DJI took one step earlier this year by adding in dual redundancy for the IMU and compass in the Phantom 4. But many felt that this wasn’t enough since true redundancy for such a system really needs to be in triplicate.

DJI has therefore included a new A3 Flight Controller for the aircraft,which can take two additional modules, thereby giving triple redundancy for navigation. Data can be analysed in real time and be compared against the different sensors to work out if there is an error or not, and then take appropriate action transparently. Along with a new GNSS (Global Navigation Satellite System) that can be upgraded to offer centimetre level positioning accuracy, flyaway risks should be drastically reduced, and accurate placement of the aircraft will be easier than ever.

In addition the GNSS system is immune from magnetic interference, meaning that the aircraft will be able to fly in environments that would normally cause safety issues for many other types of UAV system.

Powering of the aircraft also follows a strict redundancy model with the use of six separate “intelligent” batteries. This is a first. Even most custom built UAVs generally have only two battery systems. The Matrice 600 in theory has a six times redundancy, including intelligent monitoring of each individual battery’s voltage and performance.

In theory at least you could have five battery failures before really having to worry. That’s a lot of reassurance, particular if you are flying over £20k of camera gear! DJI estimate that you could fly a Ronin MX with a Red Epic for roughly 16 minutes. That would seem to be a pretty good flight time for such a payload.

All motors are actively cooled as well as being dust proof. Once again this is taking things to a good level of robustness. Dust and sand are killers for brushless motors. Even simply taking off or landing in a slightly sandy environment will take its toll eventually. So it is good to see these new sealed bearing systems come online for such an aircraft.

The inclusion of DJI Lightbridge 2 enables realtime transmission of 1080p at up to 60fps, allowing for good quality live video for broadcast as well as monitoring.

Just like the much smaller Matrice 100, the 600 has a full on board SDK allowing third parties to develop their own applications, as well as the ability to custom mount different types of components or sensors via the CAN BUS and API ports.

The Matrice 600 represents DJI getting really serious, and competitive. At £3,999 it would appear to represent extremely good value for money considering what is included and its capabilities. It also represents a very real threat to FreeFly’s Alta system, although that may still retain the crown as far as portability is concerned due to its unique rotor arm folding system. So, do you go for the portability of the Alta, or the systems redundancy of the Matrice 600? Tough call!

The M600 integrates DJI’s brand-new A3 flight controller onboard and features advanced Lightbridge 2 video-transmission technology that offers high frame rates and HD live-streaming capability at distances up to five kilometers.

“The M600 is the most-powerful and easiest-to-use professional platform DJI has ever produced,” said Senior Product Manager Paul Pan. “We’ve pre-programmed all M600 platform data and information into the A3 flight controller, remote and transmission system to minimize setup and get you flying as quickly as possible.”

The M600 is a six-rotor system with a maximum payload of 6.0 kilograms, making it ideal for the full range of DJI’s Zenmuse gimbals, including the Z15 series and the Zenmuse X series cameras, which are unmatched in providing stabilized aerial imagery. The M600’s carrying weight also allows it to fly the Ronin MX, DJI’s newest handheld and aerial three-axis gimbal. The M600’s propulsion system is dustproof to simplify maintenance and increase durability. It has actively cooled motors for more-reliable flight, and its landing gear is retractable for full 360-degree, unobstructed imaging.

The M600 is powered by six DJI Intelligent Batteries. The customized battery-management system and power distribution board allow all six batteries to be turned on and off with the push of one button and keep the system aloft, should a single battery fail. The M600 will fly up to 36 minutes with a Zenmuse X5 camera attached and up to 16 minutes with a larger camera, such as a RED EPIC. Flight time will vary for different cameras, gimbals and a number of other conditions.

The A3’s GNSS system can also be optionally upgraded to DJI Real-Time Kinematic technology, offering centimeter-accurate positioning to allow for complex maneuvers in an industrial setting and so that cinematic shots can be precisely replicated. The RTK technology can also withstand magnetic interference.

The M600 supports the DJI GO app, which includes a live video feed, battery and redundancy status, transmission strength and other data to keep the user informed of flight status at all times. The app also provides access to aperture, shutter speed, photo and video capture on any Zenmuse X-series camera, plus remote focus on the Zenmuse X5 and X5R cameras.

The M600 is a top-quality development platform, compatible with the DJI Onboard Software Development Kit and Mobile SDK to work with different industrial applications. It has dual parallel CAN and API ports for connecting DJI devices, including the Guidance sensor system, RTK GPS units or third-party components.

The M600’s retail price, including the integrated A3 flight controller with Lightbridge 2 and a full set of batteries, is 5.299 Euro.

When paired with the new DJI Ronin-MX, the M600 offers best-in-class three-axis aerial video stabilization. The latest in the Ronin line is also the most-versatile, working both on the ground and in the air with minimal setup.

The Ronin-MX works perfectly with the M600, as a fully integrated system that includes the A3 flight controller, Lightbridge 2 transmission system and gimbal in the air. It’s the first universal aerial gimbal DJI has made that communicates with the onboard DJI flight controller.

It’s fully compatible with a rich selection of DJI accessories for long-distance focus and aperture control and features remote start/stop controls and video transmission. The Ronin-MX is built for convenient, handheld use, but it also has multiple operation modes, including underslung, upright and briefcase. Apart from the M600, it’s also compatible with video cranes.

“For film directors, the M600 is a game-changer. There are other options out there, but none that integrate a top-class flight controller, video-transmission system like Lightbridge 2 and support for a wide range of cameras and gimbals,” said DJI Executive Creative Director Sheldon Schwartz. “If you go with the new Ronin-MX on the M600, you’ll be surprised at how easy it is to get unparalleled stability and cinematic-quality shots.”

The Ronin-MX has a built-in, independent IMU module, a Bluetooth module and a 2.4GHz receiver. It operates through the DJI GO app and has settings for SmoothTrack and gimbal-tuning for various cameras, including some of the RED series, DSLRs and other professional camera. It also operates in multiple modes, including aerial and car mount.

Mounted on the M600, the Ronin-MX’s CANBUS port allows all flight controller data to pass through to the Ronin-MX, meaning the gimbal is positionally aware and able to keep the horizon level. The Ronin-MX can pan 360 degrees, tilt +45 to -135 degrees and has redundant slip rings, offering enhanced reliability for operators. With an optional accessory, the Ronin-MX can transmit video real-time from a mounted camera, making full use of the M600’s Lightbridge 2 capabilities. It will also be compatible with the DJI Focus, through a wireless adapter mounted to the Focus remote.

The Ronin-MX is powered by a 4S Ronin-M battery. Third-party cameras mounted on the Ronin MX can be powered by an optional onboard DJI battery.

The Ronin MX is compatible with a wide range of cameras from Arri, Black Magic, Canon, Panasonic, RED, Sony and Nikon. Its maximum load weight is around 4.5 kilograms.

The Ronin MX retails for 1.799 Euro. Bundled with the M600 and integrated A3 flight controller and Lightbridge 2, it will sell for 6.799 Euro.