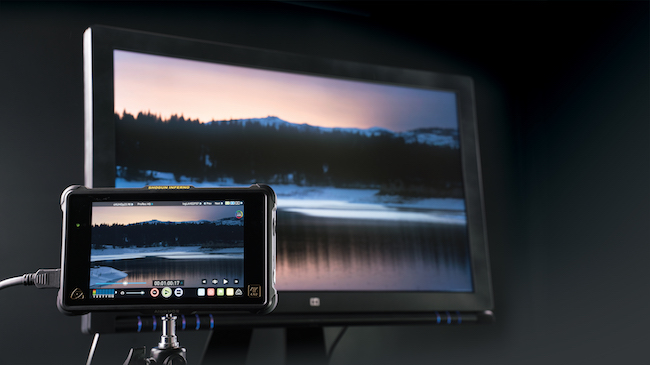 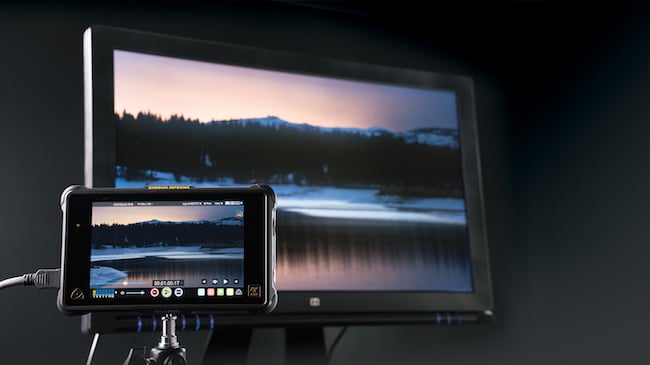 Hot on the heels of the recent Flame series of HDR monitors/recorders, Atmos has just added a new high-end product to the stable in the form of the Shogun Inferno.

As if to stop the fire of the already accelerating HDR solutions market, the Shogun Inferno will further cement High Dynamic Range recording into every day recording, and as part of a full workflow.

The specifications sound impressive. A 1500nit display with 10-bit tonal precision allowing log recordings to be seen as they should be, without the need for a LUT, with up to 60fps capability in 4K resolutions using Prores or Avid DNx HD, and up to 240fps in HD. Why 4K Raw and Raw CDNG can be recorded up to 30 fps, and 2K and HD can be recorded up to 120fps via the built in Quad SDI input.

Interestingly Atomos are seeing the product as more than just an on set monitor/recorder. They have included PQ (ST-2084) input and output to allow the Flame to be used as a grading monitor, as well as being able to output an HDR signal to compatible displays. Otherwise known as SMPTE ST-2084, this is a standard that is specified in PQ (Perceptual Quantisation) space, as a logarithmic curve that is used instead of gamma, and takes into account the non-linearity of the human eye’s sensitivity to contrast.

The 7” 1500nit monitor also allows for the use of custom 3D LUTs for roughly previewing how grades will look. The device is also capable of recording these looks baked in if you wish.

In an an interesting move Atmos are also upgrading the Samurai Blade, Shogun and Ninja Assassin to be able to use HDR image processing so that exposure on Log footage can be judged more easily. Of course this is no substitute for a real HDR display, since these devices are still only 8-bit with a 400nit maximum brightness. But this does extend the usefulness of them for existing owners. The free software update is scheduled for availability in May.

At an RRP of £1665 ex Vat in the UK and $1995 in the US, it seems that external recording is offering ever more value for money and I do wonder if we will need internal camera recording systems at all in the future.

Elsewhere at NAB, Atomos also has a few other tricks up its sleeve to help promote the nascent 4K60p production ecosystem it sees emerging. These include a new range of HDMI cables that support the HDMI 2.0/2.0a standards for 4K 60p & HDR viewing whilst maintaining the AtomFLEX coiled cable for tighter cable management on the rig. There is also a new collaboration with X-Riute that allows the X-Rite i1Display Pro work with the range of Atomos monitor-recorders

Press release follows on the next page.

Melbourne, Australia – 17th April 2016: Atomos invented the all-in-one monitor recorder category and now redefine it with the Shogun Inferno. It is the combination of the most advanced monitor technologies – 1500nit/10bit/HDR, the latest recording capability – 4Kp60 over Quad-SDI, along with playback & editing functionality that encourages on set collaboration. Shogun Inferno makes mastering a high resolution, high frame rate, high dynamic range workflow available to all filmmakers.

Shogun Inferno sits as the flagship model in the new 8-strong Atomos HDR line-up which has expanded to include HDR as a free update to the Blade HD series, Ninja Assassin, Shogun and Shogun Studio along with the recently announced Flame series.

“The best technology booms are the ones that truly WOW long standing professionals. HDR on the Atomos products leaves even the most experienced video professional excited like a kid in a candy store – never before have you actually been able to monitor and shoot what you are actually seeing” said Jeromy Young CEO and Co-founder. “Just as we opened up the changeover from MPEG to ProRes and the upgrade from HD to 4K, we’re focused on ensuring the exciting breakthrough that is HDR easily becomes part of every filmmaker’s arsenal. To do this all at 4K 60p is a real revolution”.

Shogun Inferno has all of the premium monitoring features previously announced on the Shogun Flame i.e. 10 stops of dynamic range with AtomHDR, 1500nit brightness for outdoor monitoring & 10-bit processing for smooth color transitions. In addition, Inferno also adds;
• High quality 4K 60p and HD 240p ProRes and DNxHR recording, from either a video or Raw signal – perfect for sports broadcasters and slow motion recordings
• Raw to Raw CDNG recording up to 4K DCI/UHD 30p or 2K/HD 120p. CDNG support will also be added to existing Shogun Flame, Shogun and Shogun Studio users one month after the launch of Inferno.
• Versatility of Quad SDI connections to let you input from cameras with 1.5/3/6/12G SDI outputs without the need for converters – perfect for 4K HDR multi cam events
• PQ (ST-2084) input that allows you to use Inferno as a grading monitor in Post
• PQ (ST-2084) output standard HDR to compatible TVs and monitors

The Samurai Blade, Ninja Blade, Shogun and Ninja Assassin also benefit from getting a free upgrade to the AtomHDR image processing for their 400 nit, 8-bit displays. This is possible because Atomos control both OS and the LCD display engine allowing previous generation HD products to receive this amazing feature for free. This gives a preview of the Post Production HDR result in the field so that judging exposure and bringing it into Post for HDR or SDR delivery is possible for shooters who have a Log output from their camera. The free OS upgrade to gain AtomHDR for Blade, Shogun, Ninja Assassin and Shogun Studio is scheduled for May 2016.

In addition to the announcement of Shogun Inferno and the expanded HDR line-up, Atomos have made further announcements at NAB to support this new 4K 60p, HDR world;

Atomos Shogun Inferno in detail:
• AtomHDR; AtomHDR lets you shoot with the high brightness range of your camera’s Log profile and preview the final, vibrant post production HDR result.
• 4K 60p; Record and play out pristine ProRes/ DNxHR in 4K resolution and 24/25/30/50/60p frame rates.
• HD 240p; Apart from 4K recording, high frame rate HD from 50p to 240p can be recorded from cameras that output these high frame rates.
• Quad SDI; The Quad SDI inputs let you connect from cameras with 1.5/3/6/12G SDI outputs without the need for converters.
• Raw recording; Capture the RAW output from Sony FS7/ FS700 and Canon C300MKII/C500 over SDI, recording to either ProRes, DNxHR or CDNG.
• 10-bit monitor; 10-bit monitor processing increases the number of colors from 16.7 million for standard 8-bit panels to 1.07 billion, minimizing color banding on screen.
• 7” 1500nit brightness; For Standard Dynamic Range (SDR) shooting ramp the brightness slider up to 1500 nit for hood-free outdoor monitoring.
• Apple ProRes & AVID DNxHR recording; Record to visually lossless Apple ProRes or AVID DNxHD in Rec709 or Log formats as an edit friendly, visually lossless industry benchmark independent of the camera brand used.
• PQ in/out; Take PQ out into larger HDR compatible screens or feed HDR from your NLE into the PQ input for HDR grading using the Inferno.
• Custom looks; Apply a custom look to footage by uploading and applying “.cube” 3D LUT’s. View in full/half mode on screen, output it to a monitor or record into the footage.
• Continuous power; Our patent pending Continuous power system automatically swaps to the second battery when power is low for uninterrupted recording in the field.
• Playlist generation; Create playlists easily, either entire clips or tagged parts of clips, for playback on the unit or out to a larger screen.