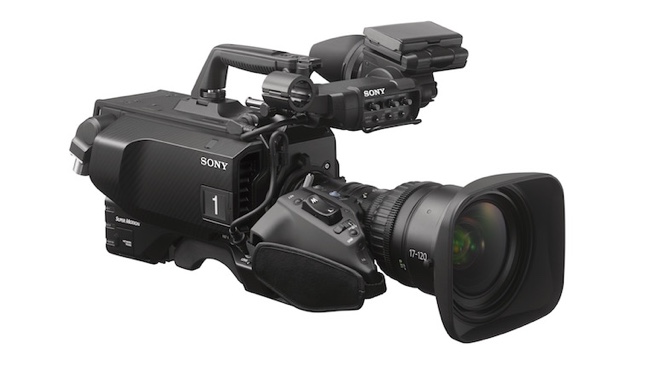 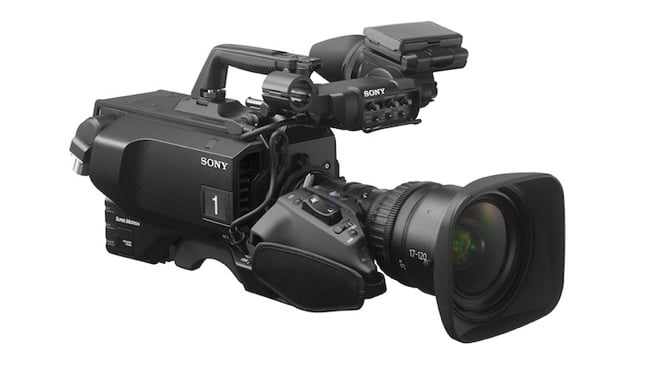 Sony is majoring on 4K and HDR ecosystems at NAB, including new cameras, displays, live broadcast IP improvements and the next generation of its Optical Disc Archive System.

Upon arriving in Las Vegas for NAB Show 2016, I barely had time to check my bag with the Hard Rock Hotel staff before rushing to the Sony news conference in the hotel's Muse Ballroom. I entered the packed hall just as the event was kicking off. I'm glad that I made it, because Sony's conference was packed with new products that should be of interest to film and video professionals, especially for those in the live broadcast arena.

The star of the event, which was given its proper billing at the show's conclusion, was undoubtedly the HDC-4800 4K 8x ultra high framerate camera system. Sony exhibited snowmobile footage shot with the camera at 8x slo-mo at 4K resolution. The subject was well-chosen and the result was impressive, as snow flying into the air in the wake of these snowmobiles really showed off the clarity of the image at high framerates. For those that may need to go even slower, the HD setting takes the high frame rate capability even further, up to 16x. This imager employs a new super35 sensor and supports both 709 and the wider 2020 colour space. HDR support is in the works.

Fans of Sony's XDCAM line may be pleased to learn of the just announced shoulder-mounted PXW-Z450, which uses a 2/3" sensor to capture 4K/UHD video. For those that require better low light capability, Sony also debuted the PXW-Z150, sporting a 1" sensor. Both cameras feature networking functionality, making them attractive options for live broadcasts.

Sony also lifted the veil on the PVM-X550, a massive 55" monitor with 12-bit signal processing, allowing for accurate viewing of high dynamic range video. Here at RedShark, we've been great proponents of HDR ever since we experienced Dolby's treatment of HDR displays. Sony's large monitor fills a need and prior gap in the company's HDR ecosystem. Now, the PVM-X550 joins the popular 30" BVM-X300 HDR display in its line-up, giving productions and exhibitors even more options.

For those that need to monitor multiple streams of HD content, the PVM-X550 supports quad-view, meaning you can view four discreet 1080 streams at once.

Sony showed off its IP Live Production improvements by way of a short video presentation, featuring one of the local operators in Brazil that is gearing up for the Summer Olympics in Rio. The roving production utilizes Sony's Networked Media Interface (NMI) to power its live 4K IP broadcasts, while keeping costs down and allowing greater scalability, as compared with traditional SDI live production workflows.

Sony also announced the second generation of its Optical Disc Archive System, which offers across the board improvements over its previous iteration. Gen one claimed over 50 year shelf life and max 1.5TB capacity. Gen two claims a 100 year shelf life, double the transfer rates and max 3.3TB cartridges.

Archiving has been a hot topic at RedShark, as we're cognizant of its growing import as file sizes perpetually balloon. Sony, too, has apparently placed emphasis on new archival solutions, as its Optical Disc Archive System, Gen 2, will begin a testing phase with select high profile clients, including the Golf Channel, the first broadcaster to sign on for the new standard.

We've highlighted what we think are the most impactful announcements from Sony at NAB Show 2016, but the company has much more news for video pros, including an entry level studio camera, a wireless microphone system and more. Check out the Press Release on Page Two for a full listing.

The following are highlights from Sony’s NAB 2016 news:

·        Sony’s Media Cloud Service is expanding. TEGNA Media is using the platform for central distribution of its stations’ syndicated content. CBS signed on to use Sony's Cloud platform for network news.

·        Sony’s Hawkeye live sports tracking solution -- now installed in over 450 stadiums worldwide, and used by over a dozen major sports leagues, including a new rugby league that starts April 17.

The HDC-4800 uses a new Super 35mm 4K CMOS sensor and wide color space (BT.2020 and BT.709).  It supports PL mount lenses to capture high resolution, crisp images for live sports shooting.  HDR support is under development and will be available in the near future.

Sony is unveiling the second generation of its Optical Disc Archive System which adopts new, high-capacity optical media, rated with a 100 year shelf life with double the transfer rate and double the capacity of a single cartridge at 3.3 TB.  The Generation 2 Optical Disc Archive System also introduces an 8-channel optical drive unit, doubling the read/write speeds of the previous generation, helping to meet the data needs of real-time 4K production.

Optical Disc Archive technology is designed for use as a near-line, deep archive storage or disaster recovery systems, ranging from large scalable robotics down to stand-alone archive systems. Sony is also embracing an open platform approach for broad compatibility, providing technologies and support to encourage other manufacturers to develop complementary products for the technology.  Currently, 42 companies have announced their support for Optical Disc Archive.

Support for this system is growing, with current customers including the Fox Station Group, Alabama Public TV and WRAL/Capitol Broadcasting.

There is support for Gen 2 from several customers. The Golf Channel, Sony’s first customer in the U.S., is committed to Gen 2, and several others will begin testing Gen 2 soon.

This year, Sony adds a new monitor – the PVM-X550, a 55-inch, OLED panel with 12-bit signal processing, perfect for client viewing. The TRIMASTER EL™ PVM-X550 supports HDR through various Electro-Optical Transfer Functions (EOTF), such as S-Log3, SMPTE ST.2084 and Hybrid Log-Gamma, covering applications for both cinematography and broadcast.  The PVM-X550 is a quad-view OLED monitor, which allows customized individual display settings across four distinct views in HD. It is equipped with the same signal-processing engine as the BVM-X300, providing a 12-bit output signal for picture accuracy and consistency. It also supports industry standard color spaces including the wider ITU-R BT.2020 for Ultra High Definition.

Sony is enhancing its fully interoperable IP Live Production system with Networked Media Interface (NMI). The new suite of solutions has been developed to help broadcasters make the most of IP technology, allowing them to deliver on the increasing demand for 4K live content while addressing the cost and scalability issues associated with conventional SDI live production workflows.

Sony will be demonstrating its continued commitment to delivering IP interoperability among a wide range of compatible live production products through its IP Live Alliance. The Alliance has, with the recent participation of Grass Valley, now grown to 49 vendors across the live production space, and support is continuing to grow as more broadcasters adopt IP Live.

AXS-R7 portable memory recorder for the F5 and F55 is designed for the more demanding requirements of working in 2K and 4K RAW.
The R7 records 4K at a continuous 120 frames per second in 16 bit RAW, in full resolution, with no line skipping.
It also supports up to 30 seconds cache recording in 4K RAW at 24P, great for documentary or wildlife shooters who need to capture spontaneous action.
Sony is also introducing new cards that double the speed of existing media to 4.8 gigabits per second, for sustained 120 frame RAW recording.

HXC-FB75 Camera -- A successor model to Sony’s HXC-D70, the HXC-FB75 is a cost-effective entry level studio camera. No camera adapter is required for fiber transmission to the CCU, and Sony’s HDVF interface enables smoother and sharper focusing.  The lens, viewfinder and microphone packaged model is available in addition to the camera body only model.

LMD-B170 – a 17-inch, lightweight, compact Full HD LCD monitor, incorporating features and designs from Sony’s PVM-A Series OLED and LMD-A Series LCD picture monitors to give users a familiar interface, especially when using multiple series of monitors. The LMD-B170 can be wall-mounted for in-house use or used as a field monitor. Interfaces include SDI, HDMI and composite video with stereo analog audio as standard. The monitor also has 2W+2W front stereo speakers, more powerful than a monaural speaker or a rear speaker system.