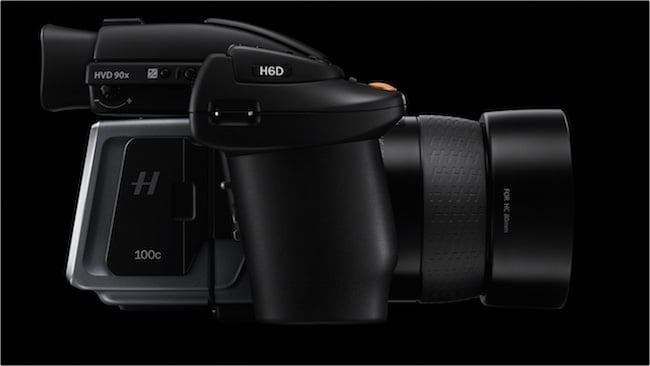 Based around Sony’s 100 megapixel CMOS sensor, the $32,995 H6D-100c is an intriguing, if extremely expensive, new addition to the range of high-end video/still options available on the market.

Expensive though it undoubtedly is, that price actually pegs the new Hasselblad some $18,000 less than the Phase One camera based on that same new Sony sensor. And if that $33K tab is a bit high for you, consider the H6D-50c for $25,995 which sports a 50MP version of the sensor.

Hasselblad recently dropped the word that it would no longer be repackaging OEM Sony mirrorless cameras in customized body accessories but that it would be introducing entirely new cameras worthy of the legendary Hasselblad name. These two cameras certainly fit that bill.

The H6D-100c has some impressive specs. It captures 16 bit color with a dynamic range of 15 stops. In still mode, the camera images a lossless uncompressed RAW or 8 bit TIFF. In video mode, it records full HD up to 30 fps in compressed H.264 or in its Hasselblad RAW format, records HD or UHD internally. A free Hasselblad utility transcodes the RAW video to ProRes.

The camera has two CFast slots and one SD slot. The rear 3” touchscreen has a resolution of 920 dots. It accepts Hasselblad’s H series lenses.

The emergence of high megapixel cameras was hinted last fall with Canon’s technology demo of a high MP DSLR followed by the actual Sony 100 MP sensors in the Phase One camera.

We will undoubtedly be seeing higher megapixel cameras in the still world. How much that technology will be useful in the video world will be highly dependent upon future cameras’ abilities to scan the sensor fast enough to capture an image not plagued with jello-vision.

The Hasselblad entries are great aspirational cameras for the still photographer and the 100c’s ability to capture uncompressed RAW video internally to CFast cards adds an element of intrigue for the video shooter.