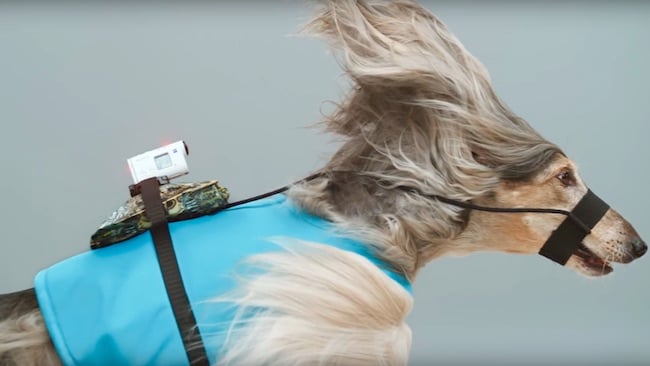 Have Action Cam, will travel

Sony’s fun new video for its Action Cam highlights what a strong and robust performer the company’s go-anywhere unit is.

Say you’re a turtle and you want to experience what it’s like to go really, really fast. How would you go about it? Well, the turtles in this viral video from Sony decided to first strap Sony Action Cams to their backs and then strap themselves in turn onto different breeds of dogs and shoot balls down a racetrack to see which one was fastest.

And no, the turtles weren’t real.

You can watch the results in the ‘Turtle Cam’ video below and, while it’s fun, it really does serve to highlight some of the capabilities of the range, with some excellent slo-mo shots in particular taken from the dog/turtle’s back.

Sony’s Action Cam range starts with the £129 WiFi capable HDR-AS20, which, even though it’s the entry-level unit in the line-up, features an ultra-wide 170º Zeiss Vario-Tessar lens and an 11.MP effective 1/2.3"-type back-illuminated Exmoor R CMOS sensor.

In fact its whole spec is pretty impressive. It records up to Full HD resolution and 28Mbps video bitrates, and framerates run from 50p all the way to 240p super-slow motion. Sealed in its housing its good down to depths of 5m (where a special underwater white balance can be selected to keep water in the blue end of the spectrum) while it also has a shock rating equivalent to a 2.5m drop.

And though SteadyShot image stabilisation won’t quite mitigate against that, motion sensors in the camera detect shake when it happens and compensate for it with a decided buffer area on the sensor, which is why some of the TurtleCam shots taken from the dogs’ backs look so smooth.

Several models add further features such as GPS and enhanced processing for better image stabilisation in roughly the same form factor, before you then make the jump to 4K and the £319 FDR-X1000V. This uses the well-regarded XAVC S codec to ensure quality footage with high bitrate recording of up to 100Mbps. It’s half a centimetre longer and 30g or so heavier, but that doesn’t seem a significant penalty for the extra functionality.

There is also a mini Action Cam which has a form factor 30% smaller than the others in the range and comes in at a mere 7.4 x 3.6 x 2.42cm and weighs just 63g including battery.

Accessories include the usual harnesses, mounts and straps, while an optional wristwatch-style Live-View Remote lets users control up to five camera units at once, checking viewing angles, commanding REC/Stop, deleting excess footage and changing shooting modes while in the middle of the action themselves.

5,000,000 and counting have watched the Turtle Cam video by now and, in case you were wondering, no turtles or dogs were harmed in the making of the film. All animals were professionally supervised on set by the American Humane Association and the turtles on the dogs’ backs are custom designed robotic puppets. But one more thing: for our money the greyhound, a bit like Usain Bolt, eases up just before the line too.