Blackmagic Ursa Mini 4.6K could be a higher res BMCC...and that would be great! 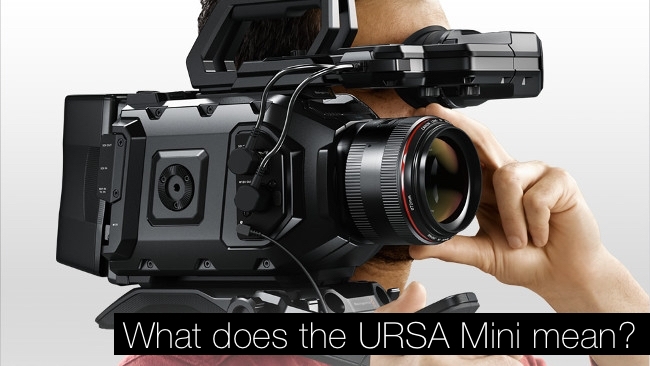 In the wake of the news that the Ursa Mini 4.6K variant is shipping, but without a global shutter, Phil Rhodes places it all in proper perspective.

No matter what anyone does or says, there will be a lot of comment about Blackmagic's recent press release concerning the state of the 4.6K Ursa Mini. That's understandable, given that it's probably one of the most hotly-anticipated cameras of the last many years, based on the many very nice things about the 4K version.

The 4.6K camera as announced (which we'll hopefully get our hands on reasonably soon) answered two key questions about the existing field of cameras. Blackmagic's 4K cameras, all based around the same sensor and having similar overall performance, were loved for their global shutter, but, directly because of that feature, suffered somewhat reduced sensitivity dynamic range over competing rolling-shutter devices of otherwise similar spec.

We should be clear here that the performance of the 4K Blackmagic cameras was in no sense a serious problem to competent crew. The 4K Production Camera is vastly sharper, quieter, more sensitive, lower power consumption, smaller, lighter and has probably a stop more dynamic range than something like a Thompson Viper or Sony F900, and much beautiful work was done on those cameras back in the day. The flash recording system is certainly vastly higher quality than HDCAM and vastly less cumbersome than the disk recorders often used on Viper (or, alternatively, much cheaper than the Venom recorder). Can we make serious movies with these things? Of course.

Similarly, there are a lot of big-chip cameras around the same price range as the Ursa Mini – Blackmagic's own, superb Cinema Camera among them –  which have the edge in terms of dynamic range and especially sensitivity, but suffer rolling shutter. People overlook the severity of this problem; there are certain things which really can't be shot on rolling shutter cameras at all, even though people do keep trying to shoot scenes involving zenon strobe lights and machine-gun fire on electronic-shutter Alexas with often regrettable results.

So, what the world wants is a simultaneous combination of the dynamic range of the 2.5K Cinema Camera with the resolution of the Production Camera. To be fair, the 4.6K was never going to be quite that, because of – well – physics, which force us to choose either high dynamic range or global shutter for complex reasons of sensor design. It was, at least, to offer us the choice of either at the flick of a switch, which is an extremely enticing prospect, but that's now unlikely to emerge for at least a while.

This is, obviously, unfortunate. If there's any whining to be done, it's probably fairest to restrict it to the state of an industry which has normalised very early announcements of new products and their features. I wouldn't be surprised to see tickets to Proxima Centauri teased at NAB, all underlaid with safe-harbor disclaimers about forward-looking statements. There are arguments to have about when and how this sort of thing became normal, but it remains the case that companies are more-or-less forced to put out specs very early so as to avoid being crushed, at least in popular estimation, by competitors who are probably doing exactly the same thing. Collisions between ambition and achievability, which are occasionally inevitable, are highlighted unflatteringly by this situation.

Right now, the 4.6K should at least be a high-resolution version of the 2.5K and, if it is that, it will be pretty spectacular, overlooking the rolling shutter. With that proviso, the 2.5K itself was certainly pretty spectacular. The company's press release is reasonable. It doesn't quite have the sense of searing frustration that dripped from Grant Petty's famous 2012 forum post regarding sensor supply problems with the original Cinema Camera, which genuinely did seem to be caused by an external issue, but it is at least upfront.

This is not an endorsement of the camera, which we haven't used yet. But we will do soon and key things like the rolling shutter performance (which, again, is an issue which exists to some degree on cameras at many times the price) will be established.